Montclair Film Festival’s centerpiece film, screened Saturday at the Wellmont Theater, was “Late Night,” the first feature film written and produced by Mindy Kaling that received a standing ovation by an appreciative Montclair audience. And Montclair loved Mindy Kaling and the character she plays, Molly Patel, a new writer for a talk show veteran — Katherine Newbury, a character that is funny, frank, flawed and a first — a female with gravitas in the historically male-dominated world of late night television.

Imagine if alongside Stephen Colbert, Jimmy Fallon and Jimmy Kimmel, there was a powerhouse female late night host. Kaling creates that seamlessly with Newbury, (played brilliantly by Emma Thompson who Kaling admiringly describes as the “greatest living performer”), a dynamic female host who holds her own for decades until she gets complacent and finds herself struggling to stay relevant.

It takes Patel, a gushing chemical plant worker with a dream of writing comedy, who lands the job as a diversity hire (something Kaling experienced hersel at “The Office”) to shake things up at Tonight, Newbury’s show, and ultimately help Newbury grow. 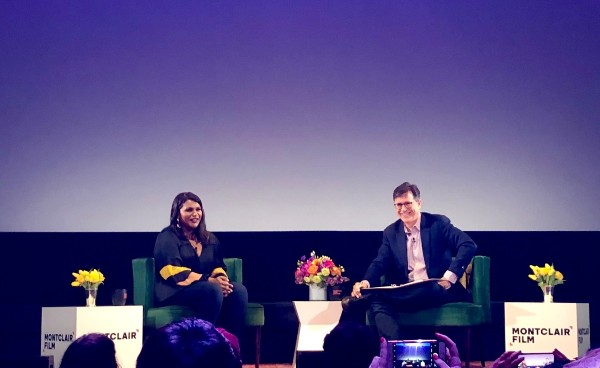 Colbert, in a conversation with Kaling before, asked what it was about Emma Thompson that made Kaling select her for the role.

Kaling said she was struck by Thompson’s ability to do both drama and comedy really well. She also loved that Thompson is able to “say terrible things to someone and yet you still like her.”

The fact that Thompson is so experienced that she didn’t need any rehearsals (the film was shot amazingly in 25 days and on a very small budget) was another big factor.

Kaling talked about her other Late Night hiring choices; more than half of the team working on the film were females. Kaling chose director Nisha Gantara because she got Kaling’s vision and says Kaling “I wanted to give the chance to someone who looked liked me.”

Growing up, Kaling described herself as a quiet, overweight kid who with parents who were a little overprotective. As a result, she spent a lot of time with her mother, an OB/GYN, at her office, writing two page plays she would show her mom between patients.

“I would hang out in the room where they would draw blood, and when someone would come in, if they were cool, I could stay,” Kaling recalls.

She shared her own impressions of Indian culture (“Indian people like to take 14-hour car rides. It’s like ‘Let’s go to Disney from Boston, let’s go to Niagara Falls from the equator'” ) and her early comedy influences (Click and Clack on those long car rides and later, shows like Arrested Development and Saturday Night Live).

During Kaling’s time as a writer on The Office, she auditioned for Saturday Night Live as a series regular — a childhood dream come true. Before she went to the audition, Steve Carell told a co-worker that he believed she would get the part. Instead Lorne Michaels, offered to hire her as a writer. Kaling, already under contract as a writer at The Office, passed.

While researching for her film Late Night, Kaling visited Colbert’s show to experience what it is really like in the writers’ room of a late night talk show.

“I was at first terrified of your reaction to this,” said Kaling to Colbert, about what he would think of “Late Night.”

“I think it’s pretty accurate,” Colbert said, adding. “You captured how when you go into the writer’s room, they’re not moving.”

Colbert asked Kaling why she chose to focus on a woman as a 28-year veteran of late night, while acknowledging the contributions of both Joan Rivers and Samantha Bee.

“I did it because I wanted to see it,” Kaling said. “What we are representing is science fiction.”

Kaling’s next project include an adaptation of “Four Weddings and a Funeral,” coming to Hulu in July.