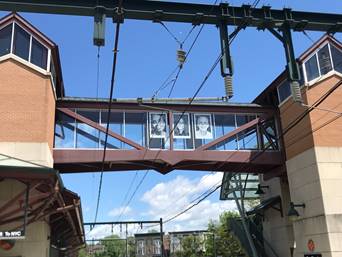 NJ TRANSIT has unveiled the third installation of the Out in the Open. In it Together public art project highlighting mental health issues at its Bay Street Station in Montclair. The installation, first shown at Newark Penn Station in October 2018, is presented in conjunction with the Mental Health Association of Essex and Morris (MHAEM) and intended to demonstrate mental illness can affect anyone and help is available.

Five large-scale photographic portraits of individuals impacted by mental illness are displayed along the walkway running over the Montclair-Boonton Line tracks to show that together, faces of hope and resilience are at the forefront of this issue.

“NJ TRANSIT is glad to partner with MHAEM on this very important project, highlighting that mental illness affects people of every age, gender and strata,” said NJ TRANSIT Executive Director Kevin Corbett. “We are pleased to display these powerful images in our stations, and if we are able to help one person recognize the need for mental health assistance in themselves or a loved one, then the effort is a success.”

The photos debuted at Newark Penn Station in October and remained on display until they were transferred to the Frank R. Lautenberg Station at Secaucus Junction in December. After the showing at Bay Street, NJ TRANSIT will announce more displays for the future.

On March 2, 2011, the artist JR won the TED prize at the TED Conference in Long Beach, California, and called for the creation of a global participatory art project with the potential to change the world. This project is called INSIDE OUT.

Inspired by JR’s large‐format street “pastings”, INSIDE OUT gives everyone the opportunity to share their portrait and make a statement on what they stand for. It is a global platform for people to share their untold stories and transform messages of personal identity into works of public art.

Each INSIDE OUT group action around the world is documented, archived and exhibited online. Over 260,000 people have participated in 129 countries.