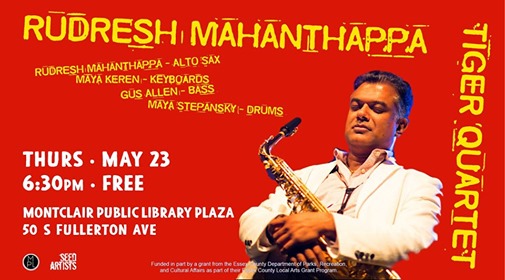 Seed Artists is thrilled to present the Rudresh Mahanthappa Tiger Quartet in a FREE early-evening concert, Thursday, May 23, from 6:30-7:30 at the Montclair Public Library.

Hailed by Pitchfork as “jaw-dropping… one of the finest saxophonists going,” alto saxophonist, composer and educator Mahanthappa is widely known as one of the premier voices in jazz of the 21st century. (He is also a Montclair resident.) For this concert, he leads a cracking group of young players, including Montclair HS alum Maya Stepansky on drums:

Rudresh Mahanthappa has over a dozen albums to his credit, including the acclaimed Bird Calls, which topped many critics’ best-of-year lists for 2015 and was hailed by PopMatters as “complex, rhythmically vital, free in spirit while still criss-crossed with mutating structures.” Rudresh has been named alto saxophonist of the year for seven of eight years running in Downbeat Magazine’s International Critics’ Polls (2011-2013, 2015-2018), and for five consecutive years by the Jazz Journalists’ Association (2009-2013) and again in 2016. He won alto saxophonist of the year in the 2015-2017 JazzTimes Magazine Critics’ Polls and was named the Village Voice’s “Best Jazz Artist” in 2015. He has also received the Guggenheim Fellowship and the Doris Duke Performing Artist Award, among other honors, and is currently the Anthony H. P. Lee ’79 Director of Jazz at Princeton University. 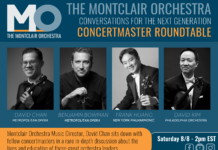 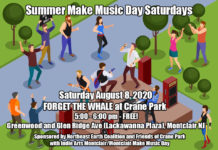