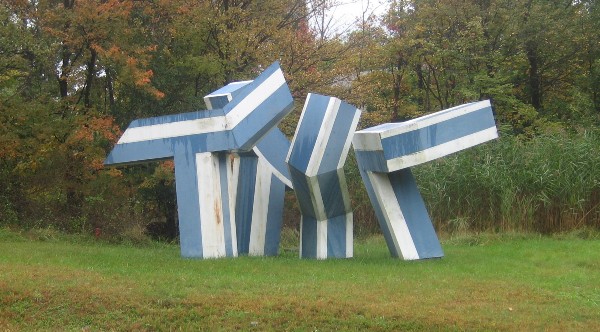 Riker Hill Art Park, a 42-acre complex, is a former United States Missile Tracking Base in Livingston that was purchased from the federal government for one dollar in 1974. The buildings, which once housed army facilities, have been transformed into 38 artist studios. Artists-in-residence work in various disciplines such as painting, fine metal jewelry, ceramics, pottery, glass-blowing, fine prints, photography and sculpture.

The improvements being made to Riker Hill Art Park include the installation of sidewalks and curbing, addressing flooding issues along the western section of the roadway, repairing stairways, making sure the artists’ studios and the main exhibit building are handicap accessible, creating a designated scenic overlook site that includes message boards that tell the history of the former missile base and park, updating directional, parking and building signage, updating the facades of the artists’ studios, and creating a community garden that has some plots designed to allow people with disabilities the opportunity to garden.

“Essex County Riker Hill Art Park is a hidden gem in our historic Parks System and the upgrades being made as part of this project will make the facility more user friendly and encourage the public to experience the natural beauty of the landscape and the creativity of the artists,” Essex County Executive Joseph N. DiVincenzo, Jr. said at a press conference earlier this month. “A great deal of thought and public participation went into setting the priorities for this project. It’s evident improvements are needed at the Art Park and it became clear during the public hearings that the neighbors and residents were ready to see changes made. I thank the members of the Township Council for joining with us and supporting this process and the improvements,” he added.

“This is such a beautiful place but so many people are unaware that Riker Hill Art Park is even here,” Freeholder Len Luciano said.

“The artists at Riker Hill create art and take it out into the world. We welcome the opportunity to work with Essex County and are thrilled it will become as beautiful on the outside as what is created inside,” said Ellen Hanauer, president of the Riker Hill Artists’ Association.

Suburban Consulting Engineers from Flanders was awarded a professional services contract for $56,515 to design the improvements. APS Contracting from Paterson was awarded a publicly-bid contract for $1,186,010 to perform the construction work. The project is being funded through the County’s Capital Budget. Work is scheduled to be completed by the end of 2019.

Several public meetings were held throughout 2018 to hear public opinion and ideas about improving Riker Hill Art Park. In August 2018, DiVincenzo immediately addressed concerns raised about traffic safety on Beaufort Avenue, the road leading into the park. Trees and overgrown brush were cut back and removed to improve sight lines and the drainage system along Beaufort was upgraded to address flooding.

DiVincenzo had proposed to make improvements to Riker Hill Art Park in 2008, but the plan was met with a great deal of opposition from area residents and artists who rent space in the park.