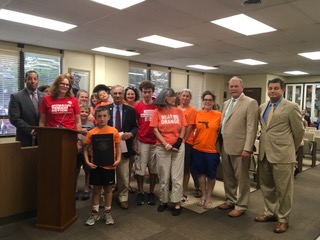 Montclair Township Council, joined by Moms Demand Action for Gun Sense, made a proclamation Tuesday night declaring National Gun Violence Awareness day. Jaime Bedrin, regional co-organizer for Moms Demand Action for Gun Sense in America, highlighted the growing problem of gun violence in the nation. The organization was created in 2012 following the shootings at Sandy Hook Elementary School in Connecticut. About a dozen activists were also present during the proclamation at the council meeting.

“While we know and we grieve and we fear for these mass shootings that happen that we live in fear of and get the attention, it’s really an everyday problem in America,” she stated.

Bedrin explained the importance of recognizing that 96 Americans are killed daily due to gun violence everyday, as a result of a hand gun.

Kerry Youmans, a gun violence survivor, also spoke during the proclamation. She recounted the horror of being abducted as a 21-year old college student.

“I was abducted by at gunpoint by a man who had just shot and killed a police officer two days earlier,” she explained. “Thankfully, I was eventually rescued by a S.W.A.T. team after spending 10 hours with this person. My goal in life since then has been to not have something like this happen to another person.”

Youmans also emphasized that the “Wear Orange” awareness week initiative honors Hadiya Pendleton, a 15-year old girl from Chicago who was shot in the back after going to a park with friends after finishing her high school exams.

“One of the reasons why we’re here is to honor Hadiya and it’s why we wear orange for Gun Violence Prevention Week,” added Humes. “She had just participated in President Obama’s inauguration when she was killed back home in Chicago. Such a horrible tragedy and such a talented young girl.”

“That’s not true because we were both doing what we should be able to do as young students without the threat of violence,” she added. “So this is why we honor Hadiya Pendleton and all the other survivors during Gun Violence Awareness Week and wear orange and we appreciate the declaration.”

She then welcomed anyone who was interested to join the movement, adding that there are six million members in “Moms Demand Action.” The gun violence prevention organization is comprised of mostly volunteers. She said the goal of the movement is to work towards “trying to find solutions to lax gun laws and close loopholes that endanger our family members.”

The Mayor’s proclamation was presented by Councilman Robert Russo and Councilwoman Renee Baskerville. Russo cited statistics when he declared the first Friday in June to be National Gun Violence Awareness Day. He stated that everyday 100 Americans are killed by gun violence and that Americans were 25 times more likely to be killed with guns compared with people from other high income countries.

For more information or to join the organization Moms Demand Action, text HONOR, to 66443.