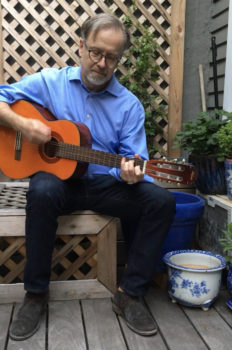 Where do you live? Montclair

When did you move there? In 2003, from Clinton Hill in Brooklyn. Loved where we lived, except for the public schools.  Montclair was the first place we explored, and it just felt right.

Where did you grow up? Portland, Oregon. Go Blazers! I was there for their inaugural season, 1970, when Geoff Petrie scored 2031 points and won rookie of the year. I then moved to Warwick, New York & environs when I was 11.

How do you make a living? I’m a literary agent at Writers House in New York.

What is your everyday passion? Four or five years ago my buddy Peter Simon introduced me to road cycling, which has become one of the joys of my life. It has heightened my appreciation of the loveliness (and bike-friendliness) of this town of ours.

What’s your idea of a perfect weekend day? I’d probably set that story down the shore in Ocean Grove, where my girlfriend has a summer place—riding, reading, a short-shot (sugar cone, not wafer) at Days Ice Cream (est 1882), maybe pinball up the boardwalk in Asbury.

What’s your favorite local restaurant? My sentimental favorite was the Pilgrim Diner in Cedar Grove, a local institution that closed mysteriously a few weeks ago. My kids and I have been going there (and my kids & their friends, without me) forever, and we’re heartbroken. Also, the MishMish Cafe in Montclair, which reopened after briefly threatening to close, thank goodness!

What’s on your nightstand? Marcy Dermansky’s new novel VERY NICE, which is getting rave reviews up and down the line. And I’ll plug two new books (my clients, of course) that I’d recommend for *your* nightstand: Darcy Lockman’s groundbreaking ALL THE RAGE: Mothers, Fathers, and the Myth of Equal Partnership; and Kelsey Rae Dimberg’s GIRL IN THE REARVIEW MIRROR, a brilliant upmarket debut thriller.

What are you listening to? When my son’s in the car, there’s always gonna be some sampling from the rapper XXXTentacion, whose legacy is clouded in controversy (serious domestic abuse issues; then he was murdered a year ago at the age of 20) but a wholly original and unexpectedly vulnerable artist. My daughters have put me onto (Sandy) Alex G, Pinegrove, John Mayer…Left to my own devices? Wilco, the Pretenders, Camper Van Beethoven, Elvis Costello.

What are your current indulgences? Killing Eve, Fleabag, lots more binge-worthy t.v. I have been rewatching The Sopranos, and am now halfway through its final season.

What talent you would most like to have? Given my profession, it would have been wonderful if I weren’t the slowest reader you ever met.

What’s the worst-kept (or best-kept!) secret about Montclair? There’s a curse on every restaurant that’s ever resided at 104 Walnut Street, up the street from Egan’s — The Spot, Mac Attack, and more. They open, they founder, they close.  Whatever opens there next, we’ll be pulling for you.