Montclair Township Council met Tuesday night for a conference meeting, but much of the meeting focused on the council’s last regular meeting, where 4th Ward Councilor Renee Baskerville was blindsided by a vote that resulted in Councilor-At-Large Rich McMahon becoming Deputy Mayor.

Other business was discussed, but the issue regarding Baskerville being passed over in favor of McMahon for the honorary position came up throughout the meeting, as residents expressed frustration and sought answers.

“For the public to understand what’s going on, there should be some degree of transparency,” Scott said. “We expect better treatment for our council woman.” 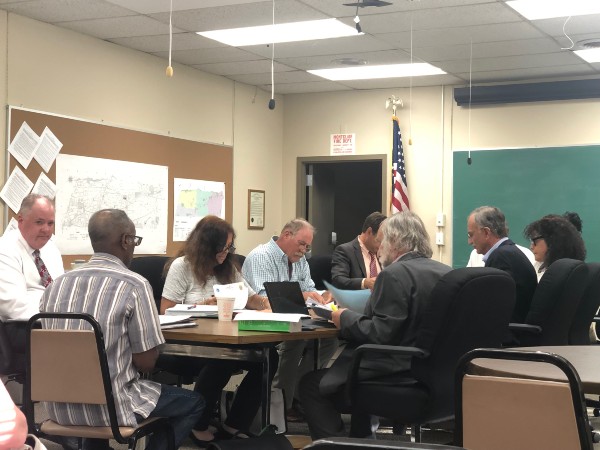 Scott also asked why four council members – Councilors Spiller, Schlager, Russo, and McMahon — “flip flopped” on their commitment to a 20 percent set aside for the Hahnes Redevelopment Project at the June 25 meeting, instead voting for 10 percent.

“If we are going to make a commitment to any new development to have 20 percent affordable housing set aside and then to have that same body turn around and not support their own commitment is astonishing,” Scott said, adding that it’s inexcusable, especially when the Montclair Planning Board had also recommended setting aside 20 percent of the available units for affordable housing.

Scott asked why the council would do this in exchange for a $175,000 contribution to the township and 20 public parking spaces, when it was losing possibly seven affordable units in that development, something he estimated at close to a millions dollars of housing.

Public comment continued later in the meeting. Dr. Frank Barnes, an optometrist and resident in the 4th Ward, said he came to speak because “our wonderful 4th ward council member was looked over as deputy mayor.”

“She’s the hardest working person we know and it was her turn,” said Barnes. “I’m not sure if it can be reversed. I’m not sure how the rest of the Township feels about it, but I can tell you how the 4th Ward feels about it. When Renee is left out, we’re all left out.”

Barnes questioned why, if a resolution to appoint Baskerville was on the agenda, how the procedure went differently.

Dr. Tanya Carter, an optometrist in practice with Dr. Barnes, also spoke in support of Baskerville.

“I think my question would be ‘Why not Renee?’ As constituents of this town, I think we deserve an answer,” Carter said.

Councilor Schlager had initially proposed the resolution appointing Baskerville as deputy mayor to be on the agenda a month earlier.

Councilor Russo said he had seconded the resolution at that time.

“All I can say now was that I supported the resolution,” Russo added.

Schlager said it was her error to put the resolution on the table in the first place.

“I forgot that matters of this kind happen in closed session. I’m not saying I take it back, but it was my error asking for that the resolution to be on the agenda,” Schlager said.

“What’s on the agenda are the topics for the meeting, it’s only when someone moves a resolution at the meeting, that it gets voted on. At this meeting, after the closed session, there was a motion to make Councilor McMahon deputy mayor and that was the motion that was voted on,” township attorney Ira Karasick explained.

Councilor Spiller offered in comments that he respected all his council members, but said he was part of no such agreement regarding the deputy mayor and that he was not asked by Baskerville for his vote. He said he was asked by McMahon and he moved him forward.

Councilor Baskerville thanked both Barnes and Carter for their support and said she would be in no way compromised in terms of her service. She said she was proud of her job as a council person and would continue to probably put in more time than anyone else to service this community, “with the exception of our mayor who is doing a magnificent job.”

“We have a lot going on in 4th ward to be proud of and I don’t want to let questions of integrity of a few people put a cloud over all that,” Baskerville said, adding that she wanted to move forward.

She also went on the record to condemn inhumane conditions at the Texas border.

“It is our moral duty as a nation to defend the children,” Baskerville added.