Call it a happy coincidence.

Local landscape design business owner Frank Contey always wanted to work with dogs, especially rescues. He joined the army of Shelter volunteers to assist with walking the Shelter’s canine friends after his own dog passed away.

And George Oliphant, star of NBC-TV’s “George to the Rescue,” a show which does expert home makeovers with volunteer professionals by providing much-needed home renovations to deserving families and a Montclair resident, wanted to help the community and its less fortunate four-legged friends at the Shelter.

In April 2016 the Shelter was severely damaged by a fire that devastated the kennel runs and other areas of the building. No animals were hurt and the Montclair community stepped up to the plate – within a day, foster homes were found for all the displaced animals, approximately 70 cats and dogs.

“We came to look at the animal shelter a number years ago to see if there was something we could do on the inside, like a family play room, renovate the offices or some other project,” said Oliphant. “The fire put that on hold.”

But Oliphant knew they’d be back.

“Because the Montclair Animal Shelter participates in “Clear the Shelters,” and it’s my local Shelter, I knew about the fire,” said Oliphant. “The fire at the Shelter showed who the people of Montclair really are when every animal was accounted for and had a home and a place to go during that time.”

George and the show’s producer, Andrew Bank, returned to the idea of a remodel for the Shelter when they learned about the dog exercise area in the back of the building.

“We realized a renovation project for that space would be a great way for the show to join up with the “Clear the Shelters” initiative,” said Oliphant.

Now in its fifth year, “Clear the Shelters” is an annual event that sees NBC and Telemundo stations team up with shelters across the country in a nationwide pet adoption drive.

Tackling the dog run renovations was clearly a matter for someone with true vision and ability.

“I knew that if I could find the right person who could lead the project, then we could do it.” said Oliphant. “A lot of times it’s just a matter of having the right people in place.”

Fortunately, Oliphant didn’t have to look far for the right person: Frank Contey, owner of Terra Graphics landscape design. Terra Graphics and the Animal Shelter are neighbors, located less than half a block away from each other.

“I knew of Frank, but didn’t personally know him and I knew of Terra Graphics and that they did really great work around Montclair,” said Oliphant. “But I had no idea Frank had such a passion for dogs. Sometimes it’s just the right connections, when the universe puts you in the path of the right people.”

“When the phone call came (from show producer Andrew Bank), I immediately felt this was a great project for me,” said Contey.

Renovating the area would take a lot of work, a great group of skilled workers and a good deal of imagination – this was a large space with a heavily damaged concrete surface, wire cages, and barbed wire on top of a cinder block wall.

“Clearly it was far from ideal as an area to exercise our dogs,” said Shelter Director Liz Morgan. “And it certainly wasn’t a place conducive for potential adopters and families to meet the dogs.”

“It was a space that really needed help, but I also know how expensive and difficult construction can be, especially the exterior,” said Oliphant. “I felt it was one of those things that was just too big for the Shelter to ever take on unless my show, Frank and I were able to make it a priority for the Shelter.”

“The concrete dog runs were an eye-opening experience,” said Contey. “The area was depressing and institutional, but I had visions of what I could do with the space, in consultation with “George to the Rescue.”

From a heaving concrete surface with unsightly cages and cinder block wall, within a span of eight weeks the space was transformed into something completely unrecognizable.

• Contractors installed synthetic turf with a gravel base so water drains through, along with an underground sprinkler system for light or heavy wash down to clean up the space.

• A doggie drinking fountain was installed with a fully-functional drain.

• Blue stone was placed in an intricate pattern on the grass area for aesthetic appeal.

• New, attractive fencing was put in place and kennels were made for the dogs, while Contey repurposed the roof from the old cages to create shelter from the sun.

• A tranquil sitting area, surrounded by beautiful flowers and plants, was created for visitors meeting up with soon-to-be forever friends.

Perhaps one of the most iconic additions is in the design of the dogs’ relief area – a fire hydrant.

“I found the hydrant in the Shelter parking lot behind some garbage,” said Contey. “I immediately said ‘we’re keeping that.’”

When it was time to shoot the episode finale, Shelter staff and volunteers awaited the moment of the “reveal” with great anticipation.

“We walked in and we were utterly stunned,” said Morgan. “The transformation is something no one could have ever imagined. George, Frank and all the generous contractors who donated their time and materials to create such a beautiful outdoor courtyard for our canine friends are truly a godsend. We cannot thank them enough, we cannot thank the ‘George to the Rescue’ team enough.”

“I’m glad to be able to give back to my community and to the animals and the people who use the Shelter,” said George. “I thank them for trusting me to bring in a team to do great work and we’re grateful to all who joined in to make it happen.”

The “George to the Rescue” Montclair Township Animals Shelter episode will air on NBC early in the fall season.

If you want to see the renovations, come to the Shelter for the “Clear the Shelters” adoption drive which will take place on Saturday, August 17. 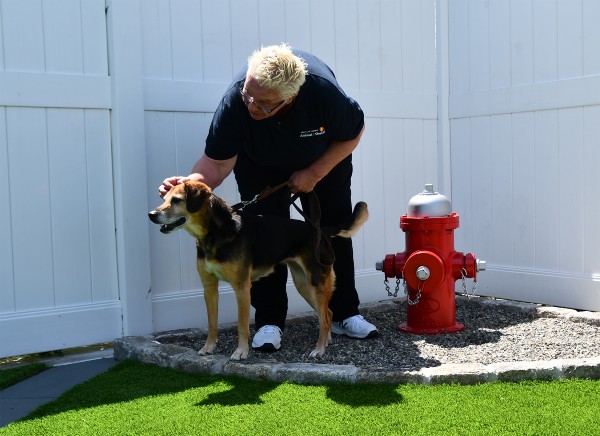