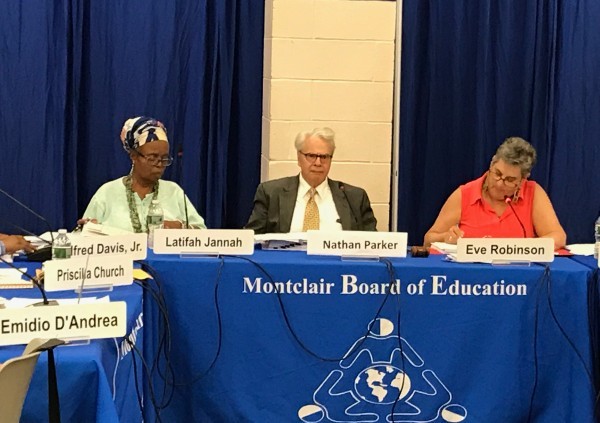 Montclair BOE president Eve Robinson started off Monday’s Board of Education meeting by welcoming interim superintendent Nathan Parker who started in his new position on Monday. Parker’s hiring was announced at Thursday’s special BOE meeting which also served as a send-off for Dr. Kendra Johson, who left Montclair for a position in Maryland.

Robinson stated that the BOE members unanimously approved his hiring and were excited to be working with him.

Dr. Parker said he spent his first day working in Montclair meeting individually with most of the district’s principal, getting a first look at each school and trying to “learn as much as possible about what is working well in Montclair and also identify areas where I may be able to support improvement.”

“Montclair Public Schools is a revered district as it has a long history of valuing and addressing the needs and have a diverse student population,” Dr. Parker said. “I am grateful to have worked in rural, urban and suburban school districts. I’m probably most passionate about my work in Orange where the graduation rate when I started my tenure was 50% and after five years, the graduation rate was over 72%.”

Parker also mentioned how one student was accepted into five Ivy league schools and another was accepted with a full scholarship to Wharton at the University of Pennsylvania.

“I know how hard and diligently Montclair has worked to meet the needs of all its students. I understand Montclair to be a model of best practices with involved students, parents, staff, and the broad community in general. I will try to involve key stakeholders and key decisions. I try to follow a systematic approach to the change process that encourages participation and a sense of involvement. I look forward to working with you as you transition to a full time superintendent of schools. I’m sure that I will learn a lot. I look forward to your help in achieving two or three concrete goals during my service in Montclair public schools. I thank the Board of Education for selecting me and let’s get ready for new and productive school year,” Parker said.

BOE member Jessica de Koninck said the facilities committee toured the high school stair construction before meeting and were pleased with how well things are moving all. All the asbestos has been remediated and two stair cases were ready to have concrete poured, possibly by Wednesday. The staircase at Park Street and at Midland Avenue are both on track to be open first day of school. The remaining staircases should be ready in late October.

The portable classrooms will remain, possibly until the December break, to allow for an easier transition.