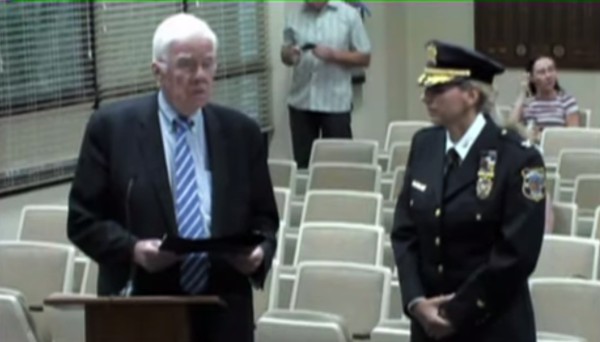 The honor was bittersweet as Frazzano is leaving Montclair for a new position in Florida. Frazzano is the first woman to lead the Marco Island Police Department.

Frazzano, who was also the first woman to become detective, sergeant, lieutenant, captain and deputy chief in Montclair, beat out 80 other candidates for the position.

Frazzano is an FBI National Academy distinguished graduate and a Department of Homeland Security fellow, focusing in counter-terrorism and security preparedness.

A 20-year member of the Montclair Police Department, Frazzano worked in the Patrol Division and Juvenile Aid and Community Policing bureaus. She has been involved numerous law enforcement activities, including work with multiple state and federal agencies.

Frazzano thanked Giblin for bestowing the honor and thanked Mayor Jackson, council members, the town manager as well as Montclair’s chief of police and the entire department.

“It’s hard to walk away, it’s bittersweet,” said Frazzano, holding back tears. “It just makes you understand how much you all mean to me.”

She added “I’ll be a mountie forever.”

Mayor Jackson congratulated Frazzano and said what an honor it was to work with her and watch her “meteoric rise.”

“I’m honored that you will be going to Florida and representing us when you are down there,” Jackson said. “As a female, in a male dominated industry, it makes your story even more compelling. We are sad to see you go, but it’s a great opportunity for you and I’m sure you’ll do fantastic job.”

Mayor Jackson announced that although the project had been pushed back, the scheduled milling and paving of Watchung Avenue was on track — for the entire three miles of the road, all the way to East Passaic Avenue.

With regards to other roads in the township under construction, Jackson said it was customary for the roads to get milled and then have a gap period of a few days to settle and to make sure that if after the milling, a repair, such as a water main break occurs, it could be repaired prior to paving.

“Since 2012, there have been 65-70 miles curbed and paved. It makes a great difference, it’s a facelift for the community,” said Jackson, adding that some roads had not been touched for 30-40 years. Jackson expects more roads to be completed by the end of this year.