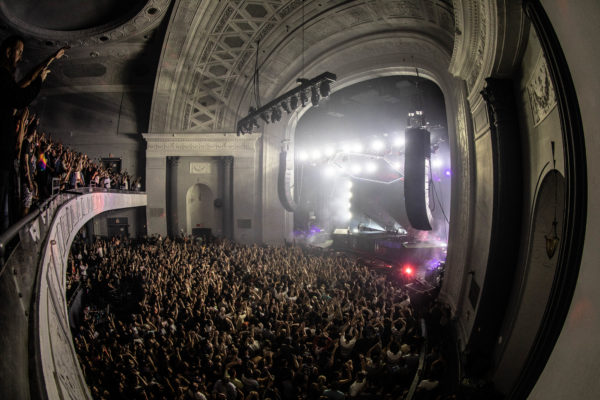 The Wellmont Theater is partnering with the Mental Health Association (MHA) of Essex and Morris Inc., to recognize September as “National Suicide Prevention Month.” The theater is set to work with the organization throughout September to make suicide prevention resources and donation opportunities available to audience members. These will be both online and in the Wellmont Theater lobby.

“We are fortunate to have an opportunity to give back to a community that’s been so good to us,” says Carly Wolfson, director of artist and customer relations at the Wellmont Theater. “Unfortunately, suicide has become synonymous with the entertainment industry. We’d like to do our part to bring additional awareness to this cause.”

According to the National Institute of Mental Health, suicide is one of the leading causes of death in the United States, claiming the lives of more than 40,000 people annually. This partnership aims to save lives by shedding light on numerous areas of mental health, including the importance of removing the stigma associated with emotional and mental disorders.

The MHA, the Wellmont’s partner in the month-long campaign, is a recognized leader in mental health systems change throughout northern New Jersey.

“Working with the Wellmont Theater is a tremendous opportunity for us to reach people struggling with mental illness who may have never found us on their own,” says Robert N. Davison, CEO of the MHA. “The theater, which can house 2,500 people, will reach a vast audience in September as it hosts 12 shows. Suicide is a preventable problem that deeply impacts communities nationwide and it’s important to reach out at community centers to let residents know where they can find help.”

The Wellmont Theater will match a portion of the proceeds to the MHA and will provide an opportunity for audience members to make $1 individual contributions when they purchase tickets through Ticketmaster. Free materials will be handed out in the lobby at every show from the Substance Abuse and Mental Health Services Administration (SAMSHA) and the MHA. This includes a suicide resource calendar, toolkit for high schools and prevention and assessment wallet cards.

The Wellmont’s General Manager, Anthony J. Morrison, notes that the venue has lost a few past performers to suicide in recent years. “Our theater’s demographics can skew somewhat younger at times, and that can be a challenging age to seek help for mental health purposes. We’re letting the public know that there are resources available,” he said.

Morrison continued: “So truly, it becomes a conversation of mental health and what we’re doing nationwide to curb the trend. We are confident that this partnership with the MHA is a great step forward.”

For anyone currently struggling with the issue of suicide, the National Suicide Prevention Lifeline is available 24 hours a day, seven days per week at 1-800-273-8255.