Luna Stage kicked off a new American Voices Series (and the 2019-2020 season) with Soo Jin Pretty Nail (and more!), written and performed by Susan Hyon and directed by David Skeist. This darkly comic, interactive experience is inspired by Hyon’s childhood as the youngest of four unhappy Korean-American children in suburban Pennsylvania.

You’ll meet Soo Jin and Susan. Susan is the little engine that could pull herself out of a crappy small-town trainwreck only to speed headlong into another of her own making. And another. And another. And yet somehow she keeps chugging along, accumulating scars and the stories that go with them. Soo-Jin is like that Korean exchange student who introduced everyone to Hello Kitty, Keropi, and cute pencils.

Hyon answers some questions about her dual performance and creation: 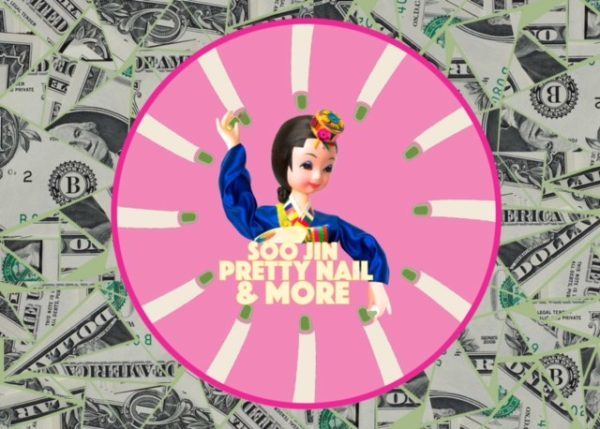 Is Soo Jin Pretty Nail (and more!) really auto-biographical? Is there a real Soo Jin? If so, has she seen the show?

Has your Korean American experience influenced you as a writer, performer, artist?

It has influenced me completely. It’s not necessarily that I am or feel 50% Korean and 50% American. And, it’s not unlike other children of immigrants born in the U.S., I imagine. You are fully American in the sense [that] English is your first/main language, and the toys you wanted were the toys that all of the more American-looking kids wanted. But then society sees you as “other” (especially if you live in a provincial town full of mostly white people), and weird things happen at home and you don’t have anyone to be a sounding board. At least this was part of my growing up experience. And what I write and perform has a lot to do with my looking back at how I developed and undeveloped and was and am under-developed and over-developed as a human being, given the circumstances of my family and childhood and just who I am, essentially, the karma that has been embodied by me in this lifetime.

What is it like to play two characters at the same time? Is it therapeutic or mind-blowing or…?

What would you like audience members to take away from their time with Susan and Soo Jin?

I’m an uptight yogi and as I go inward and try to share my interior life, I hope to inspire people to pause and go inside a bit, too. In these times, the only salve for our battered souls is to spend time alone, reflect, be bored (as opposed to constantly entertained), and work a bit more rigorously on our humanity. The paradox is that by doing so, I believe we each will not feel so alone and disconsolate, but instead, we will feel connected with other humans just a little bit more.

What inspired you to create Soo Jin Pretty Nail (and more!)?

Director David Skeist and I have had a long-running joke that started when we met in grad school (Columbia MFA Acting) that I should write a one-woman show and that he should direct it—despite the fact that I wasn’t a writer and he wasn’t a director…. The first experiment of me performing my own stuff was at Dixon Place. I had spent several weeks trying to find a coffee shop to just vomit out everything I was going through during that (difficult) time in my life. Everywhere I went (in Windsor Terrace, Brooklyn), I couldn’t be comfortable or find a quiet corner because everywhere I went seemed to also occupy pregnant women with their babies and SUV-style strollers. It was all I could write about. And then I showed up at Dixon Place with no script, but with a lot of theories and upset about racism in this country, and the deaths of Eric Garner, Sandra Bland, Philando Castile…. And then I had the chance to present the show at Baltimore Theatre Project, and David said he’d direct me and create a more sculpted, repeatable piece.

Soo Jin Pretty Nail (and more!) runs from September 21-October 7. Written and Performed by Susan Hyon. Directed by David Skeist. Performances are Saturdays at 8pm, Sundays at 3pm, Mondays at 7pm. General Admission tickets are $20 and are available at LunaStage.org or by calling OvationTix, at 866-811-4111. Luna Stage Season Passes are also available, and allow patrons to purchase a package now and select performance dates later. The Full Season Pass offers all 6 shows at 15% off for $155. Tickets: $20 https://www.lunastage.org/