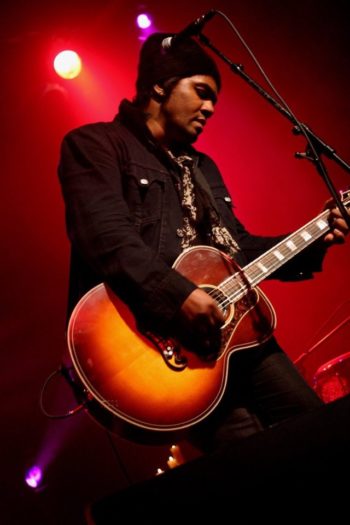 Outpost in the Burbs presents singer-songwriter Jeffrey Gaines on Friday, October 4th. The concert will take at 8 p.m. (7:30 doors) at the First Congregational Church, 40 S. Fullerton Avenue. New York City-based violinist and singer-songwriter Deni Bonet will be opening the show.

Jeffrey Gaines has been heralded for his soul-searching lyrics and his powerful live performances.
With only his voice and a guitar for accompaniment, Gaines has earned a reputation as a captivating performer, entertaining audiences everywhere he goes.

Raised in Harrisburg, PA by parents more inclined to spin soul classics by Aretha and Otis than the New Wave and Brit Rock blasting from their son’s room, a teenaged Gaines began singing and playing guitar in several local garage bands.

He soon decided to set out on his own and quickly landed a record deal, releasing Jeffrey Gaines, the first of his five studio releases. The album garnered four stars from The Philadelphia Inquirer, describing Gaines as “…an ethereal soul…insistent, impassioned, full of self-knowledge.” Somewhat Slightly Dazed, and Galore followed. Interview Magazine called Gaines’ music “soul-searching” and “refreshingly free of jargon, sentiment or cliché.

Gaines’ impressive catalogue grew with Toward The Sun, produced by Mitchell Froom (Elvis Costello, Bonnie Raitt, and Crowded House). The Boston Globe declared that “Gaines’ soulful, wounded vocals make a case for his being one of pop’s finest singers…an artist who deserves far more attention than some of his more hyped, yet less talented peers.”

It’s no secret that Deni Bonet can rock a violin like nobody’s business. Or that she writes memorable songs that make you want to listen again and again. For years, Deni has been honing her craft as a violinist, singer, songwriter and per former. Her style ranges from pop to roots-rock to new folk. Although classically trained, Deni quit the classical world because she hated having to wear black and sit still! She has a stellar resume, having performed and recorded with Cyndi Lauper, R.E.M., Sarah McLachlan and many others. Her previous appearances include Carnegie Hall, NPR’s Mountain Stage, The Great Wall of China, the United Nations, and the White House for President Obama. For the past several years, Deni has been touring in the US and Europe headlining festivals, performing arts centers, clubs, colleges, and concert halls soloing with symphonies. Her music has been featured on HBO, NBC, American Airlines, and several films.

She was recently honored to be awarded a grant through the Arts Envoy Program of the US Government to spend a month on a residency in Africa teaching violin, songwriting, and rock ’n roll at a music college in Zanzibar. Deni Bonet has released several CDs of her own original music, including last year’s critically-acclaimed “Bright Shiny Objects” on Zip Records/Sony-RED.

One lucky winner will score a pair of tickets! To enter, leave a comment on this post by 5 p.m. on Wednesday, October 2, 2019.