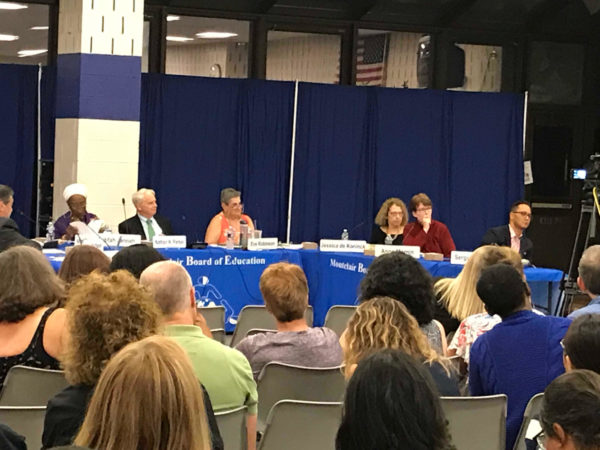 Bro, what’s going on in Montclair?

That sentiment, expressed during public comment by MHS teacher Anthony Dalbo, pretty much sums up the reaction of anyone watching the Montclair Board of Education meeting Monday night.

The evening started with the swearing in of a new board member, Sergio Gonzalez. Gonzalez was then seated at the dais with the rest of the BOE members and for his first meeting, bore witness to one of the most volatile and concerning BOE meetings to date, in large part due to a huge salary snafu that resulted in Montclair Education staff not receiving their proper pay — and instead, getting paid at the rates from 2017-2018.

Teachers and staff, as well as many parents, attended the crowded meeting, which started with an update from MHS Principal Anthony Grosso.

Grosso shared positive news about the completion of the stair project at the high school, slated to be done by mid-October.

Grosso also explored a new organization structure at MHS that would better serve students and said the all-school lunch has been successful. Dustin Bayer, head of guidance at MHS, detailed a new program, MHS 101, which strives to promote social and emotional learning and support students starting freshman year.

Then, one after another, staff spoke about shock of receiving a paycheck that did not reflect their promised salary increase, and instead, was the salary rate they were paid during the 2017-2018 school year.

Teachers spoke about not being able to pay bills or take care of other financial obligations. They also spoke of how frustrated they were that no date had been given to them indicating when they would be paid their proper salaries and receive the missing compensation. 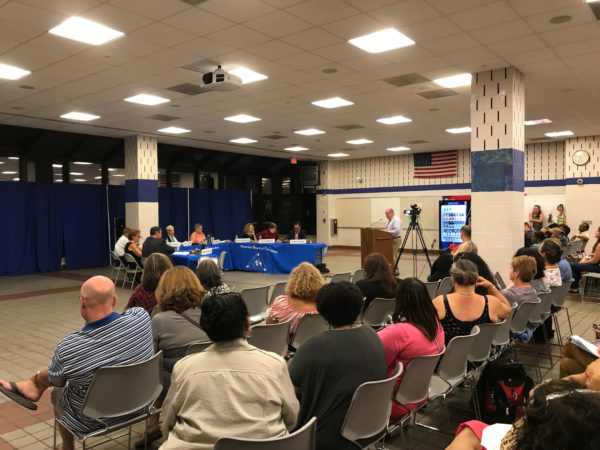 Teachers also questioned whether the district is hiring qualified and certified people for positions, and that since they are required to prove their own certification and be held accountable, they expected the BOE to do the same with regards to this huge error. A letter addressing staff first explaining the salary snafu was signed by Yesenia Budhu-Howell, Personnel Manager and Emidio D’Andrea, Business Manager. A meeting with these two individuals as well as Interim Superintendent was described by staff who attended as raising more questions than it answered. 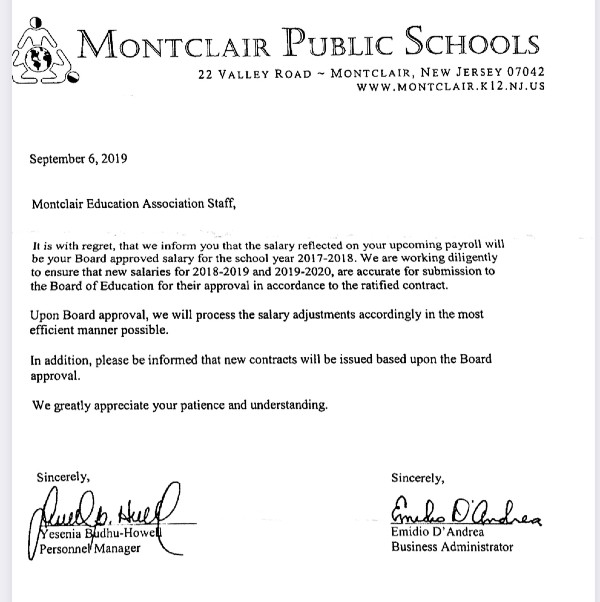 Paraprofessionals also expressed how they were overworked and under appreciated and that they were not receiving monies promised to them or benefits afforded to other professionals in the district.

MEA Vice President Tom Manos detailed a timeline of the contract settlement which started in May and end with MEA ratification prior to the end of the school year, giving personnel the entire summer to take care of the salary increases for staff.

Manos said the district’s personnel manager sent out employment contracts two weeks later than promised. Manos said many of the contracts, according to MEA members, were riddled with errors and missing stipends.

“Montclair High School lost stairs and MEA members lost their steps,” said Manos. “They have a 2017 salary with 2019 bills.”

Gina Testa, a guidance counselor hired for the 2019-2020 school year at Montclair High School after working at the school as a maternity replacement, described an even more alarming error during public comment. Testa was offered the position and a salary which she accepted. However, when she was hired and her salary was approved officially at a BOE meeting, it was seven steps lower than the salary she had been originally offered.

Nicole Farjani questioned whether children were being isolated or involuntarily confined in seclusion closets at Charles Bullock School and explained how damaging and traumatic this practice has been proven to be. Citing the district’s policy, Farjani said this practice should only be used in emergency situations and said she had been denied data, requested through OPRA, shwoing how often seclusion is being used in the district.

Other parents lamented teachers missing from Montclair High School classes and students working in class on worksheets without even a substitute to teach the classes. They also raised concerns about students being forced into taking one or more study halls rather than electives or other classes due to the new schedule at the high school.

Interim superintendent Dr. Nathan Parker tried to address some of the concerns raised by staff during a statement at the end of the BOE meeting. Parker said he was prepared to recommend a person who has the capacity to fix the problem with the salaries and is looking to hire an Interim Director of Personnel — someone with a background in education. Parker added that it was highly unusual for someone to be hired without an education background. He also added that MEA president Petal Robertson, along with BOE members and some Montclair Schools principals, were invited to meet with the candidate he is planning to recommend.

Parker added that in five years, the district has had six different superintendents. He acknowledged that trust had been broken and said it was critical for the organization to be stable to be able to recruit a new superintendent.

The current Personnel Manager was hired during Dr. Kendra Johnson’s tenure; Montclair previously had a position and job description for a Director of Personnel.

“I dropped the ball, I assumed payments would be made. I hold myself to a higher standard,” she said, adding that she wrongfully assumed that the job was going to get done over the summer.

The next meeting of the Montclair Board of Education is Wednesday, October 2, 7:30 p.m.