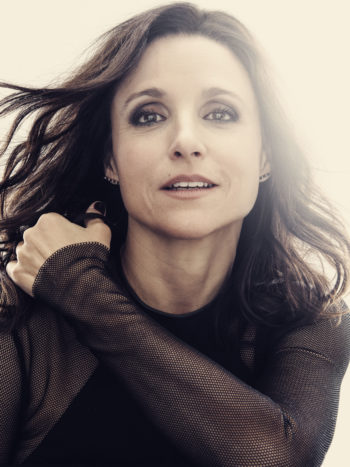 Tickets begin at $79.50 and will go on sale Monday, September 16 at 10:00 AM to Montclair Film members. American Express members will receive pre-sale access on Wednesday, September 18 at 10:00 AM, with public ticket sales beginning on Friday, September 20 at 10:00 AM. Public tickets will be available by telephone at 1-888-GO-NJPAC (1-888-466-5722), at the NJPAC Box Office at One Center Street in downtown Newark, and online at www.njpac.org and ticketmaster.com.

Montclair Film is partnering with Charitybuzz for a special auction for this event. The winner and three guests will enjoy a table for four (4) at the pre-show VIP reception, a backstage meet and greet and photo with Stephen and Julia, box seats for the live event, the opportunity to ask the first question from the stage during the Q+A portion of the show, and VIP tickets for four (4) to attend The Late Night Show with Stephen Colbert to be scheduled at the winner’s convenience. For more details and to bid on this extraordinary package, visit http://bit.ly/2019StephenJuliaCharityBuzz

All proceeds from this special evening will benefit Montclair Film, a 501(c)3 non-profit arts organization that hosts the annual Montclair Film Festival (May 1-10, 2020), as well as year-round film education, cinema, and community programs that reach over 43,000 patrons a year.

“From her celebrated work on Seinfeld to her record-setting run on Veep, Julia Louis-Dreyfus is one of the great performers of all time and having her join Stephen Colbert onstage promises to be absolutely brilliant,” said Montclair Film Executive Director Tom Hall. “This event is our biggest night of the year and provides our non-profit organization with vital support that allows us to deliver world class film, media literacy, and education programs to our patrons and students. We’re are incredibly grateful to Stephen, Julia, and our friends at NJPAC for their generosity in making this event possible. It is going to be an unforgettable evening.”

“NJPAC has welcomed Presidents Clinton and Obama to Prudential Hall, and we’re thrilled to now add ‘President Meyer’ to our list of visiting heads of state,” said John Schreiber, President and CEO of NJPAC. “All joking aside, Julia Louis-Dreyfus is one of the premier actresses of our era. I can’t wait to see what happens when she joins forces with her fellow Second City alum Stephen Colbert! Montclair Film’s annual fundraisers with Stephen and his friends have become among the most eagerly anticipated events of the Arts Center’s season, and this year’s may be the most entertaining yet.”

ABOUT JULIA LOUIS-DREYFUS
Julia Louis-Dreyfus’ comedic versatility and tremendous skill has made her one of Hollywood’s most sought-after actors and producers, expertly shaping a career full of memorable roles. Louis-Dreyfus starred in and served as executive producer for HBO’s hit series Veep, which wrapped after seven critically-acclaimed seasons. She earned worldwide acclaim for her portrayal of Elaine Benes in the hit NBC series Seinfeld, and as Christine Campbell in the CBS hit comedy The New Adventures of Old Christine.

Between all shows combined, Louis-Dreyfus has received eleven Emmys with 26 nominations. In 2017, she broke records for the most Emmys won by a single performer, as well as the most consecutive wins for a single role through her performance in Veep. This career highlight marked her eighth total acting win, tying Cloris Leachman’s record. Most recently, The Kennedy Center awarded Louis-Dreyfus with the Mark Twain Prize for American Humor in November, 2018. She has received a Golden Globe, a Television Critics Association award, a Peabody Award and the Charlie Chaplin Britannia Award for Excellence in Comedy. Furthermore, Louis-Dreyfus has won nine Screen Actors Guild awards, making her the most decorated actor in SAG history. In 2010, Louis-Dreyfus received her star on the Hollywood Walk of Fame and was welcomed into the Television Academy Hall of Fame in 2014. Additionally, in 2016, she was named one of the 100 most influential people in the world on Time Magazine’s annual Time 100 list.

Most recently, Louis-Dreyfus wrapped production on Fox Searchlight’s Downhill, where she stars alongside Will Ferrell. The comedy drama, for which she also served as a producer, is directed by Jim Rash and Nat Faxon, and is a remake of the 2014 Swedish film Force Majeure. She will next be seen in Disney’s Onward opposite Chris Pratt, Tom Holland and Octavia Spencer which is set to release March 6, 2020.