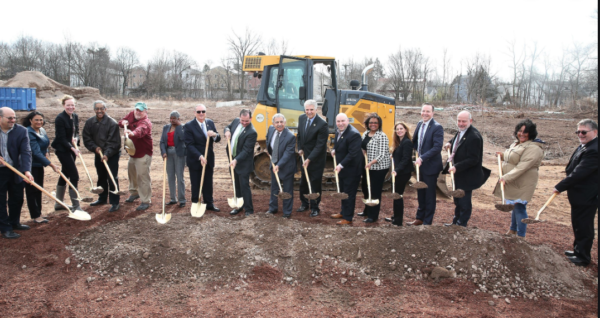 They broke ground in March, but now the Township of Bloomfield has severed its agreement with the contractor that was awarded the contract to build the Lion Gate Municipal Complex after the project fell significantly behind schedule. This exciting project, which broke ground in March, involves re-purposing the 18.2 acre site of the former Scientific Glass Factory, creating a multi-use turf field, a children’s park and walking paths along Third River. Township officials are confident that by continuing with a new contractor, the project will be completed and ready for residents’ use by Summer 2020.

The contract was awarded to Tricon, which was deemed the lowest responsible bidder. At the March groundbreaking ceremony, Tricon’s project coordinator promised the Mayor and all attendees that the wetlands, new soccer field, playground and parking lot would be completed by this September. However, by the end of August the contractor had only completed about 25% of the project, which led the Township to sever the contract and seek a new contractor to complete the rest of the work.

“The Township did all we could to keep this project on schedule, but unfortunately due to the contractor’s repeated lateness and inaction, we needed to terminate the contract as a last resort,” said Township Administrator Matthew Watkins. “Our contract with Tricon had a start and end date. The end date was established as September 2019. When the contractor fell behind schedule, we gave leeway and offered to extend allowable working hours to weeknights and weekends so the contractor could catch up, but it became obvious that Tricon could not complete the project on time and in satisfaction with the Township’s priorities. Severing this contract is in the best interests of Bloomfield residents who deserve the state-of-the-art municipal complex we have promised to deliver.”

The project is something Bloomfield residents have anticipated for years, and will combine public park use, beautification and flood prevention in an innovative way. This is a multi-faceted project that requires specific timing in order to complete it properly. This action is a last resort and taken after a lot of deliberation. There comes a time when it’s simply time to end the relationship and move on.

Lion Gate is one of the largest infrastructure projects in Bloomfield, and will create more outdoor recreation space to be enjoyed by all residents. Partial funding for the project comes from a $1.7 million Freshwater Wetlands Mitigation Council grant and a $3 million Passaic River Natural Resources Restoration grant. Funding also came from New Jersey Department of Environmental Protection Green Acres program.

The Township will now move quickly to secure and plant the wetlands area before the winter sets in.