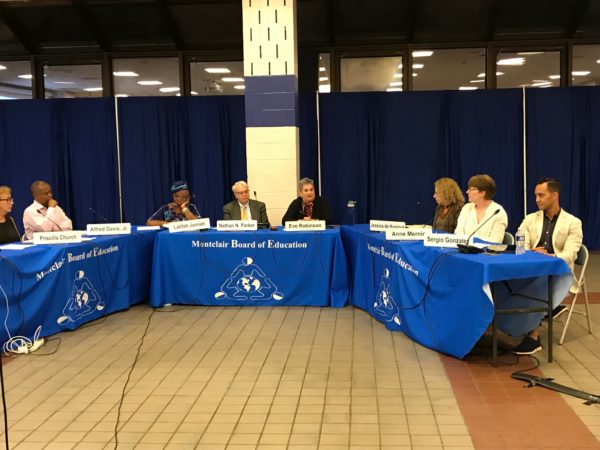 Interim superintendent Dr. Nathan Parker, at Monday’s Board of Education meeting, announced the appointment of an interim director of personnel who will be tasked with solving the payroll problem that resulted in Montclair Education staff not receiving their proper pay — and instead, getting paid at the rates from 2017-2018.

A strong showing of support for the Montclair Achievement Program (MAP) came next as teachers and parents from Charles Bullock School presented the benefits of this unique program.

MAP started in 2010 as a pilot program; the following year, it continued services and expanded to Bullock as well as Renaissance Middle School. In 2016, a transition classroom was opened, a multi-graded classroom, with a goal of inclusion and to help kids become ready for mainstream environments.

All staff receive training from the Crisis Prevention Institute in de-escalation techniques. First and foremost are verbal techniques, with physical interventions used as a last resort when needed, in instances when a child needs to be kept safe. Examples of when last resort interventions are utilized were: when a child might try to run out of the building; or is throwing things; or could be a danger to self or others. Sometimes, an intervention might be having a child sit in a “Chill Zone,” a secluded space that can offer a refuge from the stress the child is experiencing. Any interventions are communicated to parents and everyone on team.

Social and emotional interventions are a highlight of the MAP program; each student has access to individual and group counseling and the staff practice modeling and role playing skills to deal with challenges. There is parental support and consulting with outside providers working with the child to expand the team approach. 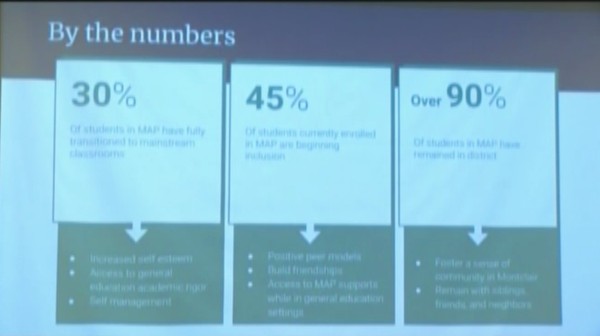 Following Woschinko’s presentation were many parents who stood at the podium and shared their personal stories and perspective on the MAP program, illustrating the success of the program in meaningful, often emotional descriptions.

Parents shared the changes and growth their children experienced. Children diagnosed with a form of autism, or other social and emotional challenges, went from acting out and getting “kicked out” of programs, to being able to make friends, enjoy activities with peers and thrive at school. 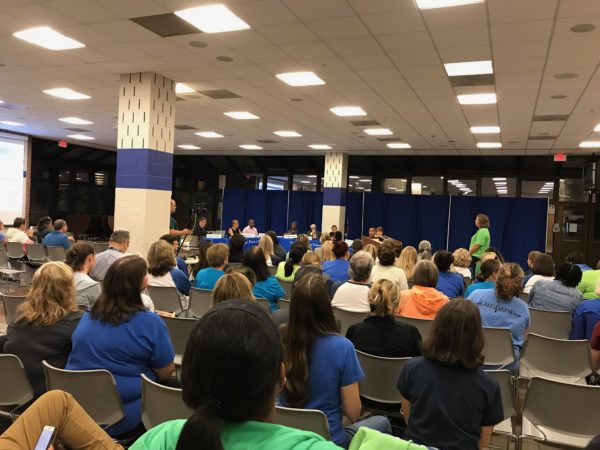 One parent spoke of the MAP program not only changing, but saving her child’s life.

She also spoke of how she knew that when her daughter was having a meltdown, that going to the Chill Zone was a place where she could escape and calm her body, rather than hurt herself or others.

Another parent spoke of her son’s loud tantrums that made it impossible for him to attend Watchung School and how she had to fight for a chance to have her son considered for the MAP program.

“They shine a light on his strengths and are the first teachers who made him feel good about himself. The MAP program has been a lifeline,” another parent stated.

Other parents spoke of how their child had transitioned into general education classrooms all because of their experience in MAP.

The MAP presentation was timely and illuminating, given that during public comment at the last BOE meeting, a parent questioned the use of “isolation closets” at Bullock.

The BOE members commended the teachers for the success of the MAP program and the thorough, informative presentation.

BOE member Jessica de Koninck said what she had heard from Dr. Nathan Parker, who had been to the MAP program. Parker said that this was the most impressive program that he had ever seen and better than many of the private programs out there.

Dr. Nathan Parker was even more effusive is his comments, saying the program should be duplicated in schools all around the country.