The importance of readers recognizing themselves in stories is well established. This is especially true for young readers. Books can affirm experiences for readers and assure them that pathways and possibilities both exist and can be forged. The flipside is how books can also welcome readers to consider and begin to understand perspectives and worlds much different from their own. Getting to know characters, learning to empathize with them, and developing varying points-of-view all help to cultivate and widen an awareness of other people’s experiences.

Middle Grade novels, usually aimed at ages 8-14, have taken the lead when it comes to topics and characters that represent a richly diverse experience that reflects the worlds young people navigate. Look below for our latest list of Middle Grade novels to encourage empathy and widen perspectives.

New Kid by Jerry Craft has garnered praise from all corners of the middle grade graphic novel arena. This story of Jordan Banks and his experiences at an elite, private middle school exposes biases surrounding class, race, and behavior that we all share. With multiple perspectives from a wide array of characters, the graphic novel asks readers to relate to characters both similar to and different from themselves. Biases and stereotypes are confronted on all sides, and assumptions are challenged. Characters are given avenues to change, and — as in real life — not all take the chance. New Kid is a great choice for reluctant readers, as well.

Focused by Alyson Gerber is an important novel for kids with ADHD to feel seen, but it’s just as important for neuro-typical young people, as well as educators and caregivers, to understand the frustrations and upheaval ADHD and related challenges can cause in children’s lives.Told in the first person from newly-minted 7th grader Clea’s perspective, readers are immersed into the stop-and-start thoughts and distractions Clea faces every day. Her academic struggles and behavior lead to Clea being tested for and diagnosed with ADHD. Where Focused shines best is in showing how Clea’s outbursts and repeatedly calling herself stupid wear on her best friend, who is also going through adolescent trauma at home. The spotlight not just on academic success, but on the effect on interpersonal relationships, will be enlightening and helpful for many readers.

Stef Soto, Taco Queen by Jennifer Torres addresses the issues of class and ethnicity in a direct and very visible way. Estefania (Stef) Soto’s family speaks Spanish at home and operates a taco truck in town. The run-down truck, once beloved by Stef and now her deepest embarrassment, is well-known by everyone at school. The infusion of Spanish phrases and the moments that show Stef acting as her father’s interpreter help the book share experiences that will be new to some readers. In addition, Stef’s longing to “fit in” follows the typical middle grade arc, however, moments like Stef’s father sharing his experience of immigrating from Mexico to the USA enhance the story and heighten the family conflicts. 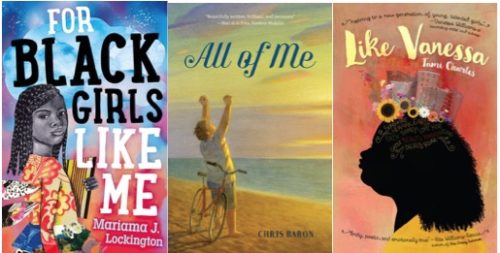 For Black Girls Like Me by Mariama J. Lockington follows Makeda (Keda) June Kirkland through difficult changes and painful growth. Keda is an 11-year-old transracial adoptee (she is Black, her parents and sister are white) whose family moves across the country and far away from her home, her school, and her best friend. That disruption would be enough to fill any middle-grade debut novel, but For Black Girls Like Mesmoothly enlaces each of those challenges with heightened wrinkles and jags that push Keda to find strength, vulnerability, and resolve in ways that make her both admirable and relatable for readers. During the novel, Keda faces indirect and overt racism, often not recognized by her sister and parents. After her attempts to advocate for herself fall flat at school, she later retaliates with hateful language – and immediately feels the “heaviness” of her actions. Family issues surrounding mental health and long work trips also appear, further deepening the storyline. Readers should be aware that the novel includes a parent’s suicide attempt.

All of Me by Chris Baron is the wrenchingly honest and raw story of Ari, a sensitive, Jewish boy who is also fat. More than a coming-of-age story, All of Meis a “becoming yourself” story. The story, written in verse, touches on self-image, friendship, family conflicts, self-harm, bullying, and navigating expectations and identity. On top of taunting emotional and physical bullying about his weight and religious background, Ari deals with awkward and challenging friendships, his parents’ crumbling relationship, and resisting the expectations of what it means to be masculine. Readers should know that the story revolves around Ari’s weight. At one point, Ari harms himself related to his weight, and he begins a diet that seems to be based on the Atkins diet. The depiction of the short and long-term results is true-to-life and body-positive in the end, but there are moments when the deprivation and commentary, especially from Ari’s family, seem especially painful. The author handles the realities of image, diet, and weight loss (and gain) deftly and with empathy.

Like Vanessa by Tami Charles is a true gem for ages 10-14. Enveloped in “typical” middle-school challenges is racism and colorism, body image, homophobia, varied examples of absent parents, and gang culture. With a structure built on introducing each chapter with poetry and journaling, readers will find themselves deeply engrossed by the main character’s courage, as well as her successes and let-downs. As a shy 8th grader who tries to blend in, for Vanessa, the idea of entering a middle school beauty pageant seems impossible, but with encouragement from a new teacher as well as her best friend, she enters and makes the cut to participate. Even though she builds her own confidence as time goes by, the stress her new pursuit puts on her closest friendship and the underlying worry of keeping the pageant a secret from her father wear on her. In addition, Vanessa’s mom isn’t around to help with questions about make-up, walking in heels, and getting her first period. The events come together on Vanessa’s birthday, a day stuffed with emotional adventure and frightening events. Readers should know that the novel includes some homophobic language in Spanish.

Stargazing by Jen Wang is a heartfelt and beautifully told graphic novel of friendship, individuality, independence, and learning from differences. We are introduced to Christine, the main character, at a musical performance where she shows both insecurity in being seen as “not as talented” and different as well as a willingness to go (slightly) against the norm. This sets up the relationship between Christine and Moon, a girl who is all confidence and impulse and…difference. The two become fast friends, and when conflicts arise, great lessons are learned. Stargazingleads readers through a new friendship with moments that display great tenderness, empathy, and understanding even as discomfort, jealousy and regret appear. Learning to understand and celebrate different traditions and choices is key to this story. Set in a Chinese-American community where everyone seems to have similar values and likes and aspirations, the graphic novel shows how different we all are, even when we seem to be very similar from afar.

GUTS by Raina Telgemeier tells the autobiographical story of how an innocent and common occurrence can spur anxiety that manifests in physical symptoms that become all but debilitating. When 4th Grader Raina catches the stomach flu, the experience of vomiting all night makes her terrified of getting sick again and having to relive the experience. As the year goes on and she enters 5th grade, her anxiety intertwines with school stress, social discomforts, and family chaos. The authentic storytelling and humor in GUTS will be relatable to many readers, and the graphic novel openly discusses topics like therapy, bodily changes, empathy, and self-advocacy. Telgemeier’s depiction of how stress and anxiety can both creep up and suddenly pounce on young people is intense and visceral. The images of anxiety surrounding young Raina are clouds and swirls of a sickly greens combined with physical reactions and worries like scared of surgery, not enough space, fear of vomit, mean people, war, drowning, stupidity… Included are many of the events and worries that parents and caregivers don’t hear from their loved ones when they ask, “How was school today?”

Not If I Can Help It by Carolyn Mackler is engaging, endearing, and informative. The story follows Willa, a 5th grader with Sensory Processing Disorder. As her comfortable and just-about-manageable world abruptly turns upside-down, the novel shares true-to-life and detailed ways in which Willa is affected. The news that Willa’s father and her best friend Ruby’s mother are dating starts a series of challenges that Willa really, really, really doesn’t want to face. Written with humor, a main character who is at once maturely self-aware and childishly in denial, and focus on a modern set of issues that include divorce, mean girls, blended families, and all the drama that comes with tweenhood, Not If I Can Help It will both entertain and help readers find empathy for fellow classmates (or themselves!) who sometimes behave in unusual ways or have seemingly unusual habits.