The New Jersey Youth Symphony (NJYS) kicks off the 2019-20 concert season with a joint performance with the Montclair State University (MSU) Symphony Orchestra on Saturday, October 26 at 8:00pm at the Alexander Kasser Theater located at 1 Normal Avenue in Montclair. Tickets are $15 available online at www.peakperfs.org/box-office.

The October 26 concert opens with NJYS’ newly minted clarinet quartet CL4tet, featuring Alex Cha, Jonathan Yu, Benjamin Swinchoski, and Jennifer Weiss. Coached by Bryan Rudderow, the ensemble will perform works by Osborne and Templeton. Following the clarinet quartet, the NJYS Youth Symphony under the baton of Artistic Director and Principal Conductor Helen H. Cha-Pyo will take the stage for awe-inspiring performances of Verdi’s La Forza del Destino Overture and Liszt’s Les Préludes. The MSU Symphony Orchestra led by conductor Nicholas DeMaison will perform Schubert’s Symphony No. 8 in B Minor and Strauss’ Death and Transfiguration, and the concert will conclude with Wagner’s famed Ride of the Valkyries in a spectacular combination of the two orchestras.

“As NJYS continues to inspire our students to strive for personal excellence through orchestral training, we strive to give our students opportunities to have exceptional experiences on and off the stage,” says Cha-Pyo. “To this end, our joint concert with the MSU Symphony Orchestra allows our young musicians to be on the campus of one of the best music schools in the state of New Jersey and perform side-by-side with John J. Cali School of Music musicians in the beautiful Kasser Theater.”

With 112 of the highest level musicians from 40 different high schools in New Jersey, the NJYS Youth Symphony has appeared at New York City’s Carnegie Hall, the Musikverein in Vienna, and at the Kennedy Center in Washington, D.C. This season culminates with the NJYS American Celebration of Music Concert Series in Italy, June 27-July 6. The tour, including four orchestral concerts and one chamber concert, will present some of NJYS’ and the Garden State’s most talented young musicians at Milan’s Teatro dal Verme, Florence’s Teatro Verdi, Rome’s St. Andrea della Valle and St. Eustachio, and Albano’s Festival Liszt Albano at Castel Gandolfo. NJYS will participate in a festival exchange with the Florence Conservatory of Music (Conservatorio Luigi Cherubini) in an exclusive concert series through Music Celebrations International. 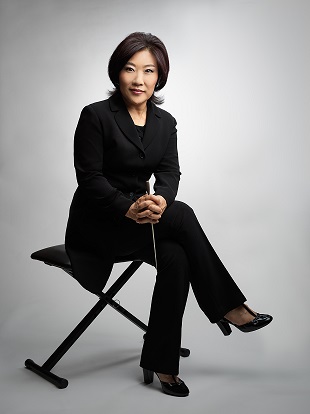 Says Cha-Pyo, “Looking ahead to Italy in the summer of 2020, Youth Symphony will explore music written by composers with connections to Italy, including Verdi, Liszt, Menotti, and Barber. Additionally, we will give four performances of a newly commissioned work by Aferdian Stephens, a John J. Cali School of Music alumni and a winner of the 2018 ASCAP Young Composer Award. For our classical music lovers, NJYS ensembles will perform over 10 works by Beethoven throughout the season to celebrate the 250th anniversary of his birth.”

Helen H. Cha-Pyo is in her second season as the Artistic Director of the Wharton Institute for the Performing Arts and Principal Conductor of the New Jersey Youth Symphony. She has also served as the Visiting Associate Professor of Orchestral Studies and Conductor of Montclair State University Symphony Orchestra at John J. Cali School of Music (2018-19).