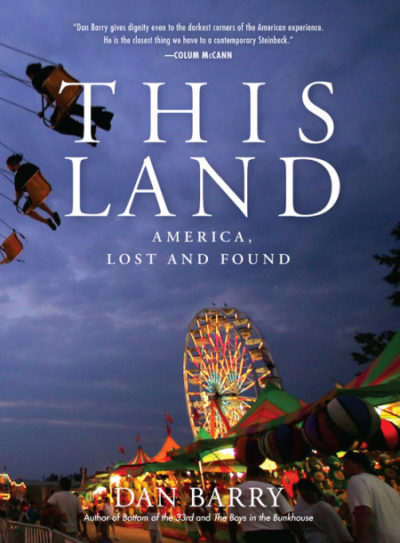 New York Times columnist and author Dan Barry will discuss his new book, THIS LAND: America Lost and Found, and will be in conversation with Times colleague and Montclair resident Matt Purdy in the next Open Book/ Open Mind event, on Sunday, October 20th, at 4 p.m.

Dan Barry is the author of the critically acclaimed THIS LAND column and will be discussing his ten years of touring the nation and sharing Americans’ stories. In addition to sharing a Pulitzer Prize with former colleagues at The Providence Journal, Dan has received, among other accolades, a George Polk Award; an American Society of Newspaper Editors Award for deadline reporting (for his coverage of the first anniversary of Sept. 11); a Mike Berger Award for in-depth human interest reporting; and the PEN/ESPN Literary Award for Sports Writing. He lives in New York.

He will be in conversation with Matt Purdy, the Deputy Managing Editor of The New York Times. Since joining the newspaper in December 1993, Mr. Purdy has worked as an investigative reporter, a projects reporter and editor on the Metro desk. He wrote the “Our Towns” column in The Metro Section for four years before becoming the investigations editor in 2004. Prior to coming to The Times, he worked for The Philadelphia Inquirer for 12 years. Matt resides in Montclair.

Watchung Booksellers will have copies of Dan’s books on hand for purchase and signing. This event is free thanks to grants from our Series Sponsors, The Investors Foundation and The Montclair Foundation. Registration is suggested to ensure a seat:

Synopsis from the publisher, Black Dog & Leventhal: A landmark collection by New York
Times journalist Dan Barry, selected from a decade of his distinctive “This Land” columns and presenting a powerful but rarely seen portrait of America.

In the wake of Hurricane Katrina and on the eve of a national recession, New York Times writer Dan Barry launched a column about America: not the one populated only by cable-news pundits, but the America defined and redefined by those who clean the hotel rooms, tend the beet fields, endure disasters both natural and manmade. As the name of the president changed from Bush to Obama to Trump, Barry was crisscrossing the country, filing deeply moving stories from the tiniest dot on the American map to the city that calls itself the Capital of the World.

Complemented by the select images of award-winning Times photographers, these narrative and visual snapshots of American life create a majestic tapestry of our shared experience, capturing how our nation is at once flawed and exceptional, paralyzed and ascendant, as cruel and violent as it can be gentle and benevolent.

Praise for THIS LAND:

“Story to story, this collection of reportage from Dan Barry for The New York Times might appear to be what it is – old journalism. And yet, what is actually here, a decade of stories about crumbling traditions, breaks in trust and flickers of grace, is the most comprehensive single-book portrait of the United States (circa 2007-2016) in a long time. The accumulated power of these pieces – angry, corny, inspiring, mournful and insane – takes on the shape of a salute to durable, keenly observed newspaper writing.”—
The Chicago Tribune, 10 Best Books of 2018

“There is something incrementally, and in the end almost infinitely heartbreaking and transformational about Dan Barry’s haunting anthology… With a Dickensian breadth of curiosity and compassion, Barry has been determined to shadow and record a decade in the quotidian flow of national life-events that are all the more indelible, mysterious and uncanny for their specificity.”—Ric Burns

“Dan Barry gives dignity even to the darkest corners of the American experience. He is the closest thing we have to a contemporary Steinbeck.”—Colum McCann

The Montclair Foundation is a nonprofit that awards grants to charitable organizations in the greater Montclair area. Equally important is the Foundation’s strong commitment to the historic preservation of the Van Vleck House and Gardens for the education, cultural enrichment, and enjoyment of the community.

The Foundation serves as a vehicle for those who wish to make lasting investments in our community’s future through philanthropic contributions and bequests. For more information, please visit themontclairfoundation.org. 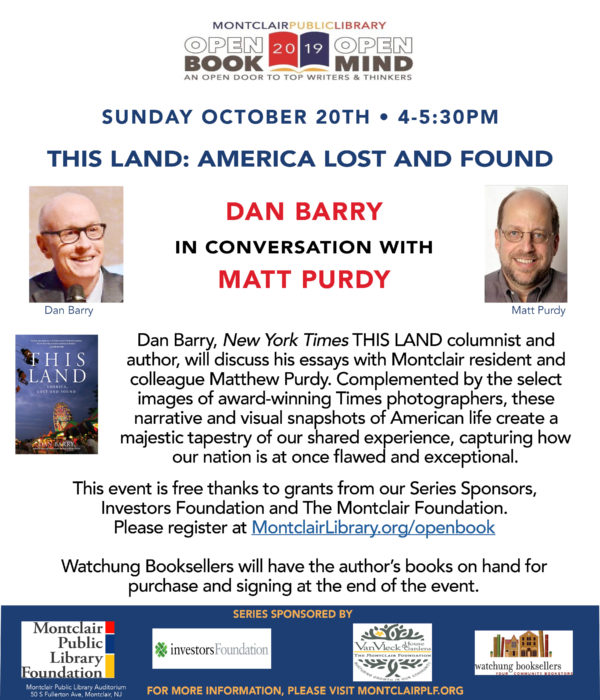