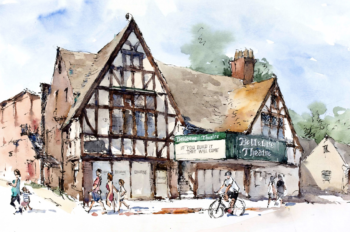 When Ling Chen has some downtime, she doesn’t spend it like the rest of us – that is, scrolling through Facebook or checking email on her phone. Instead, she sketches.

Whether on the subway, at the playground, or while her kids are eating ice cream, Ling pulls out her pad and calligraphy pen and sketches the scene before her. If she has time, she’ll finish the sketch with watercolors; if not, she’ll complete the painting at home.

Since she moved to Montclair last year, Ling has started sketching some of the town’s landmarks as well as everyday scenes – people eating outside of Sunrise Bagels, bikers riding past the Bellevue Theater, kids with backpacks entering the Nishuane school.

“I think what interests me is capturing places that people love,” she said. “They enjoy it, they enjoy the setting. I think the people bring the place to life.”

Ling says she tries to document everything with a timestamp. For example, she recently sketched the Hampton House, which closed in 2017 after 70 years.

“I knew it was going to change. I want to capture what is today as we know it,” she said.

Ling begin drawing at an after-school club in middle school in Qingdao, China, where she grew up. A few days a week, she would learn compositions and how to render geometric shapes. But her artwork stopped after she began attending an academics-focused high school.

“In China, you either have an academic track or an art track – they don’t mingle,” she explained.

Years later, after she had children and was living in Jersey City, Ling started taking her two older children to drawing classes giving by Grigory Gurevich, a Russian-American painter and sculptor. Pretty soon, she was taking classes, too. Eventually, she went on to attend workshops with watercolors masters in places like New York, Santa Barbara and Spain.

Still, Ling – who works full time at a software firm and has three kids – sees her art as a hobby, something she does in her spare time. She was surprised, she said, when people showed interest in her work and even commissioned her to draw for them. While she does sells prints of her sketches, she no longer does commissioned work.

“It has to interest me,” she said. “I don’t draw from photos. It’s impossible for me to capture a place. What I like to do is capture that moment. It has to speak to me. It’s a hobby, so it had better be fun.”

Ling says there is much more of Montclair to capture in her drawings. She would like to sketch “probably a dozen or more” businesses and also start a series on churches.

“Maybe later on I will paint houses,” she adds. “There are so many unique and beautiful houses. There are easily a hundred ideas out there, I just need the time to draw them.”