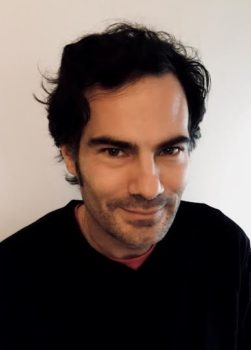 Where do you live? Upper Montclair (My friend Paul, who lives in a cooler area of town, once pejoratively called my neighborhood the “Switzerland of Montclair.” He’s not wrong, but we still love it here. Go Swiss!).

When did you move there? 13 years ago, from a small 1-bedroom apartment near Central Park, where we basically had to keep our first born son, Milo, in a dresser drawer for two years.

Where did you grow up? We moved all over when I was really young, but my family settled in San Antonio, Texas.

How do you make a living? OR What is your everyday passion?

I’m a professor at Queens College, where I teach creative writing and literary translation in the MFA program, along with courses in American and Middle Eastern-American literature, as well as literary theory. It’s one of the most diverse colleges in the country, and many of our students are first or second generation immigrants. We’ve recently been ranked as one of the top colleges in helping students move from the bottom fifth of income distribution to the top fifth. It’s the best example of the kind of American dream that can almost seem forgotten these days.

Pushing further into the “everyday passion” of this question, I recently received a large grant to develop my last poetry collection that draws upon my experience of racism as an Iranian-American, Haji as Puppet: an Orientalist Burlesque, into a staged production. I co-wrote the script with Kevin Delaney, my NJ friend and long-time TV writer, producer, and director whose credits include Pee Wee’s Playhouse. Staged in the spirit of the Larry Sanders Show as the first ever Persian late night talk show (in English), The Haji Show challenges the Western Orientalist gaze of the Middle East through edgy humor, along with the best of Iranian culture (food, art, music, etc.). It premiers November 9th and 10th, in Brooklyn. I know that seems like a long way to travel from here, but since half of Montclair residents are from Brooklyn, they know how to get there!

Strong black coffee throughout the day, ideally at least one cup from my favorite cafe, Legacy Coffee, a new place owned and managed by Montclair resident Dewar Macleod with his awesome adult kids. It’s such a charming space, and the coffee is off the charts.

What’s your idea of a perfect weekend day?

I sleep in. One of my teenaged sons walks the dog without me having to nag him too much. I have my usual oatmeal with blueberries and bananas while reading the NYT and WSJ. Typical banter with my wife, Janette, then morning writing. Later playing tennis at Mountainside Courts with Ben (fellow writer and great younger player who generously shows me how to improve my game). After an afternoon nap, more writing, family dinner, then staying up to watch my NBA team, the (5X champions!) San Antonio, Spurs.

What’s your favorite local restaurant? Uncle Momo. As a family we all seem to find exactly what we want there.

What’s on your nightstand?

I had to see a podiatrist for stinging pain on the front of my feet. She told me I’ve worn away most of the protective padding, and it doesn’t come back. There is a surgery option with only a 25% success rate. I now have to apply some special expensive cream each night. So there’s that. Also a Kindle loaded with Lauren Groff’s Fates and Furies, which I’m teaching, and invariably empty packages of goldfish and cans of seltzer left by my son Theo after sitting in my reading chair to watch YouTube videos.

What are you listening to?

My upcoming show features a Persian cover of The Rolling Stones “Sympathy for the Devil,” so I’m getting really close to that song again. Also after Ken Burns’ country music documentary, I’m back to the really early stuff, like Hank Williams, I first listened to as a kid in Texas.

What are your current indulgences?

Insane cardio, still more coffee, reading cynical philosophy that gets me even more depressed about the world (especially the Frankfurt School), rehearsing with my amazing cast for The Haji Show. I also just discovered the TV series Fleabag (a little embarrassed to admit it, but so damn good).

Our upcoming play features an interview with one of the most well-known and influential contemporary Iranian artists, Nicky Nodjoumi. I’m so humbled by his brilliant paintings, since I have no talent for visual art.

What’s the worst-kept (or best-kept!) secret about Montclair? Well, it looks like the enormous groundhog under our back porch is pregnant, and nobody knows who the father is.

What do you hope they say about you at your funeral?

“Why in the hell did he insist on being buried outside the graveyard, on the wrong side of the fence? Is that even legal?”