If you don’t know Tostchu, you’ll want to check out the well-lit, cheerful spot on the corner of North Willow Street and Glenridge Avenue. Expect to get hit with the dulcet sounds of soft jazz and the beguiling smells of melted cheese, pastrami and toasted bread.

Tostchu means “a person who is making Tost (a panini), a tost master,” according to Tostchu owner Gohkan Bars.

As an appetizer, I tried the bratwurst along with the potato salad, which was $1 extra. The bratwurst was delicious: crisp on the exterior and soft and flavorful on the inside. The potato salad was fresh and tangy, the perfect counterpoint. 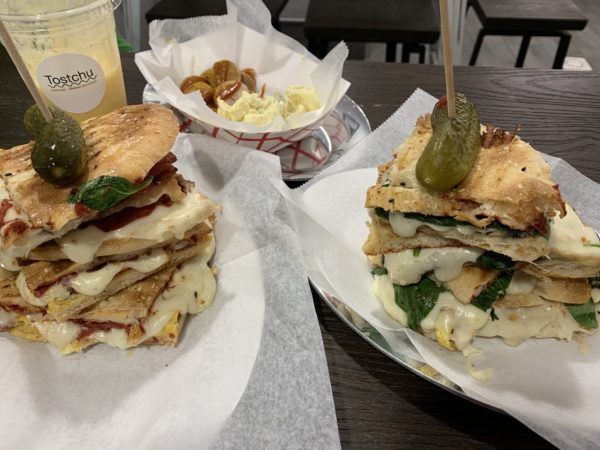 You don’t have to be a meat eater to love Tostchu. We were blown away by the Anatolian Tostchu and the Veggie sandwich. The bread was perfectly crisp and soft on the inside. There was melted Kashkaval cheese spilling over the sides, and the tomato paste added extra flavor. In addition to those three ingredients, the Anatolian had Anatolian pepperoni and egg, while the Veggie featured mushrooms and spinach. The dishes came in a large stack of 4, which was too much for me to finish, but I was very happy to take them home!

Bars was very welcoming and offered a taste of the pastrami. One tender, yummy bite later and I knew why pastrami is Tostchu’s best seller.

Funny thing is, Bars wasn’t planning to sell pastrami at all, but a gentleman, Willie Kearney changed all that. Kearney kept coming by Tostchu, asking Bars if he sold pastrami. Finally, Bars decided to surprise him and started offering pastrami, making the first sandwich for Kearney’s birthday. It was Bars who was surprised when pastrami became a top menu item.

For dessert, I ended my meal with the Sweetness Tostchu. It was made on the same tasty bread as the melted sandwiches, but it was filled with Nutella, bananas, and strawberries. This dessert was scrumptious and perfectly paired with a cup of complimentary Turkish coffee. Tostchu, I will definitely be visiting again! 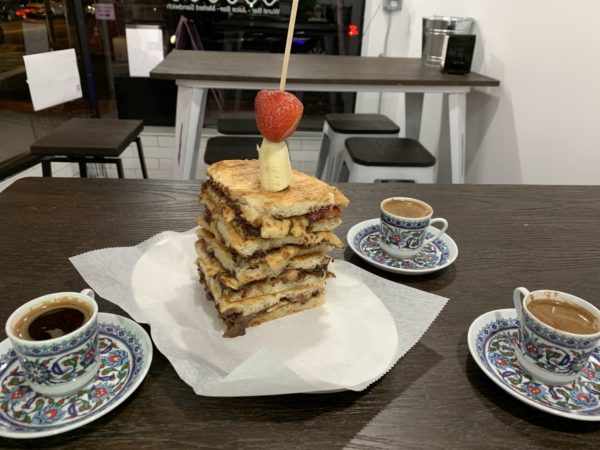 CHEAT SHEET:
Try the smoothies — they are refreshing, fruity and great with the sandwiches!
My favorite was the Veggie Sandwich, but you can’t go wrong with any melted sandwich.
If you love pastrami, you need to taste Tostchu (see below!)

Tostchu will be at Montclair Brewery (101 Walnut Street, Montclair) Wednesday, November 27, from 6:30-8:30 for a Pastrami/Montreal Smoked Meat Tasting Day.

Georgia Chen is a junior at Montclair High School. Here’s $20 Bucks explores affordable and adventurous eats around town for students.