Luna Stage will present a benefit performance of Ami Brabson’s newest cabaret A Change is Gonna Come on Saturday, December 14th. Doors open at 6:30 PM for wine and mingling. Brabson’s performance at 7:30 will be followed by live music, dessert, drinks, and coffee.

This special event takes place during Brabson’s December 6-15 engagement on Luna’s MainStage. Benefit tickets are $75 for orchestra seating and $500 for a table for four. Tickets for other dates are $30 ($25 for Luna Season Passholders.) 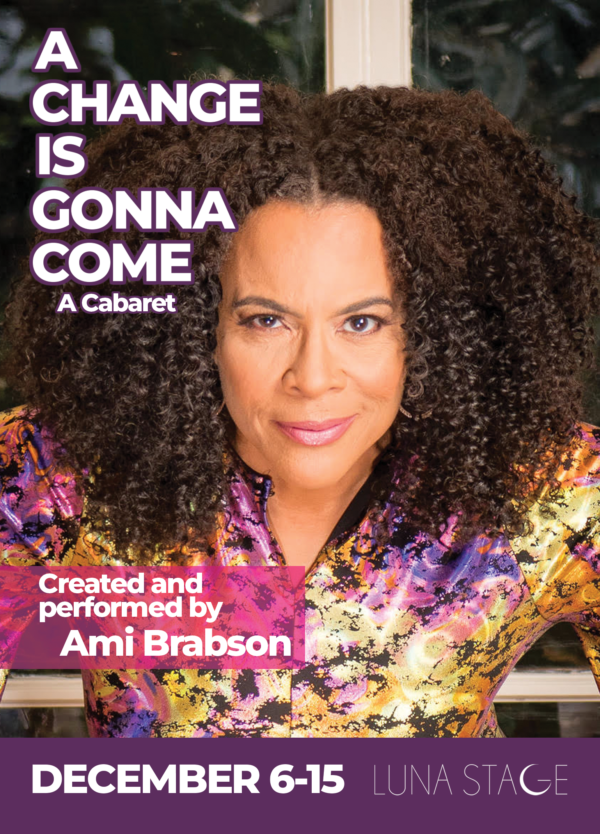 In A Change Is Gonna Come, actor-singer-writer Brabson invites us on a journey through life’s transitions, big and small. The one-woman show combines storytelling, poetry, and song to reflect on the inevitable changes in our lives and the self discovery that often follows. The loss of a parent, the demolition of a house, and the discovery of political passions all inspire reflection, music, and ultimately, hope.

A South Orange resident, Brabson most recently starred in American Son at Theaterworks Hartford, where she was described as giving a “superior, layered performance” that “outperforms Broadway.” (Journal Enquirer )

A Change Is Gonna Come will be directed by Luna’s Artistic Director Ari Laura Kreith.

Brabson’s band features Corey Wachala on piano, Colleen Clark on drums, and Joe Bussey on bass. A Change Is Gonna Come was created in collaboration with Corinna Sowers Adler .

Performances of A Change is Gonna Come will be Fridays and Saturdays at 8pm, and Sundays at 3pm. Benefit tickets are $75 for orchestra seating and $500 for a table for four. All other tickets are $30 ($25 for Luna Season Passholders), and are available at LunaStage.org or or by calling OvationTix at 866-811-4111. A special benefit performance and gala reception will be held on Saturday, December 14 at 8pm.