The week in crime from Captain Scott Buehler, Montclair Police:

Burglary
October 31, 2019 (Plymouth Street): The complainant reports that a Dell lap top, valued at $1,300, was stolen from an office.

November 1, 2019 (Plymouth Street): The complainant reports that footage captured a suspect possibly burglarizing the building. The suspect is described as a white male, 5’10”-6’0” with short hair, last seen wearing a black, hooded sweatshirt, and black pants.

Thefts
October 29, 2019 (Pleasant Avenue): The complainant states that someone had entered his unlocked motor vehicle and stolen a wallet from the glove compartment.

October 31, 2019 (Church Street): The complainant reports that her bicycle, a black Norco mountain bike valued at approximately $600, had been stolen. The bicycle had been secured to a rack prior to the theft.

October 31, 2019 (Valley Road): The complainant reports that on the 30th, a package left outside her residence had been stolen. Video captured a suspect, described as a thin male with short dark hair and a dark beard. He was wearing a dark coat with light colored cuffs around the neck, wrist and the bottom of the coat, a black shirt with a white and yellow design, light colored sweatpants, and black Adidas slippers.

November 1, 2019 (Grove Street): The complainant reports that a package containing $30 in merchandise was stolen from outside his residence.

November 2, 2019 (Orange Road): The complainant believes that she left her wallet in the South End Food and Grill on a counter. After leaving the establishment for approximately ten minutes, she returned but the wallet was not there.

November 2, 2019 (Grant Street): The complainant reports that a Toyota Corolla was stolen from the Sherman Street Lot.

November 4, 2019 (Bloomfield Avenue): An employee at 7-11 reports that on the evening of the 3rd at approximately 10:00 PM, a male reached behind the counter and stole approximately $250 worth of lottery tickets. The suspect is described as a black male, 5’7”-5’10”, slim build, no facial hair, and last seen wearing a green and black sweatshirt with a white Adidas logo on the front and white stripes down the sleeves and blue jeans.

Vandalism
October 31, 2019 (Harvard Street): The complainant reports that a window to his residence broke after an egg was thrown at it. Three teenagers were last seen running east on Harvard Street, with one described as wearing a hooded Adidas sweatshirt.

November 2, 2019 (Upper Mountain Avenue): The complainant reports viewing footage of two males in her yard on the 1st shortly before 10:00 PM, possibly looking into the residence and cars in the driveway. The first suspect is described as a black male, medium build, bearded, wearing blue jeans, a gray hooded sweatshirt, white sneakers, a black skull cap, black gloves and a jacket similar to a varsity jacket, dark blue or black with yellow sleeves. There is orange trim at the bottom of the jacket and orange writing on the right sleeve and back. The other suspect is described only as a black male, medium build and weight, bearded, wearing gray pants, a gray jacket, black shoes, gray gloves, and a black skull cap. 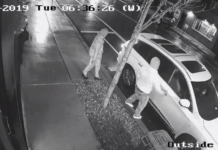 more from Luna Stage - 9 hours ago