The Nutcracker is considered by many to be the quintessential ballet of the holiday season. The iconic classic was first performed in St. Petersburg, Russia, in December 1892. The ballet is based on a story by E.T.A. Hoffman, The Nutcracker and the Mouse King, which was later adapted by Alexander Dumas père. The original ballet was choreographed by Marius Petipa and the score was written by Pyotr Tchaikovsky. Many versions of the ballet have been performed throughout the years, ranging from minor story changes to hip-hop adaptations, and ballet schools and companies have formed long-standing traditions around their own productions.

One such school is the New Jersey Dance Theatre Ensemble of Summit, NJ, which is set to perform its 50th anniversary production next month at Montclair State University. NJDTE itself was born in 1969, with Dr. Alfredo Corvino as the Founding Artistic Director, a position he held until 1982. Dr. Corvino studied ballet at the National Academy of Ballet in Uruguay, later dancing with the company. He toured internationally with several ballet companies. Later, he served on the faculty of The Juilliard School for 42 years, taught at the Metropolitan Opera Ballet School for nearly a decade, and founded and directed his own school for 25 years.

For the past 25 years, NJDTE has been under the artistic direction of Nancy Turano, award-winning Director, Master Teacher and Choreographer for Dance, Film, Opera and TV. She performed as a principal dancer with Ballet Hispanico of New York and Buglisi Dance Theatre. Her choreography has been presented throughout the US, Mexico, Panama, Israel, Sweden and Germany, and she’s choreographed 26 new works for NJDTE alone.

As the Nutcracker has been a part of NJDTE since the beginning, so have many of the costumes that will be used in the 50th Anniversary production. These costumes were originally made in 1969 by Dr. Corvino’s wife, Marcella Corvino, who served as the original costume designer. Throughout the years, new costumes were made by the parents of the students, who also made minor adjustments to the older costumes. The current costume designer and sewing circle chair, Meyvi Gorey, has recently undertaken the task of restoring many of the costumes so they can continue to be used. She says, “These costumes are beautiful because they were not bought from a big company. They’re all made by parents who wanted to help.” 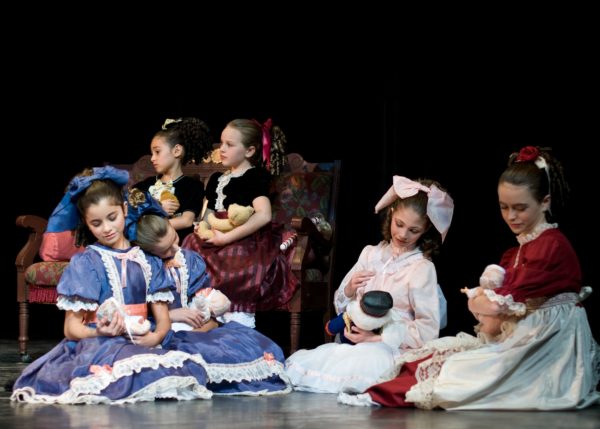 Gorey gained her skills as a seamstress through a lifetime of sewing, beginning as a child sewing with family. She went on to work with a seamstress in her neighborhood and later in the bridal industry. She also studied fashion design and merchandising at the Art Institute of New York City. One of the most important lessons she learned is that “every body is different. There’s no master pattern and no two shapes are alike.” This lesson was especially important as she worked on fitting the dancers of NJDTE.

Each year, costumes must be fitted to the current dancers, girls ranging from four to 18 years old, each with a different shape and size. Buttons need to be moved, straps fixed, and seams must be taken in and out. Through the work of Costume Directors Olga Guas and Rita Crawford, and a group of parent volunteers, the alterations are made. The women who work on the costumes have a solid procedure for making each year’s adjustments: fittings are performed, adjustments are noted, and all needed work is entered into a spreadsheet to keep track of where each costume is in the process and what needs to be done, all adhering the to one of the most important rules: never cut the costumes. “We take in and out, fold, and hide, but never cut!” Gorey explains.

Over the years, the older costumes have become stained from sweat and makeup, tutu wires have rusted and needed replacement, and layers of fabric have become ripped. However, given the nature of the delicate fabrics, there was always a hesitation to do too much to the costumes out of fear of ruining them. In some cases, entire sections needed replacement. However, because of the age of the original fabrics and the sheer difficulty of matching colors and materials exactly even under the best of circumstances, some costumes needed to be dyed for consistency. This process allows the costumes to look as though all of it was constructed at the same time.

This year, Gorey also began cleaning the costumes, which had never been allowed out of the studio before. She carefully washed them using a natural stain-removing solution as well as body soap to remove grease and oils and did spot treatments with bleach for other stains. The costumes were then dried in the sun. The painstaking process resulted in costumes that are clean and refreshed, ready to hit the stage for the anniversary production.

The NJDTE performs The Nutcracker three times each year, always a full production to the original Tchaikovsky score. No numbers are shortened and there is no modernization, which helps to give the ballerinas a true sense of the ballet. For these dancers, ballet is not a hobby. Most are eager to become professional dancers and, as Gorey says, “A true ballerina has to do the classics.”