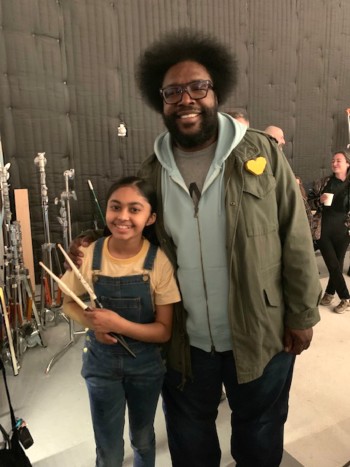 Sway Bhatia, a 12 year old music student at School of Rock Montclair, is featured in a new TV commercial for Citizens Bank called “Made Ready.” Bhatia is shown playing drums with Questlove, co-founder of The Roots, which is the in-house band for NBC’s “The Tonight Show Starring Jimmy Fallon.”

“My manager knows that I’m a drummer, and he submitted me to audition for the commercial with Questlove,” says Bhatia, who is also an accomplished professional TV/stage actress, singer, and model with a wide range of credits – including HBO’s “Succession”, Netflix’s “Master of None”, and the Encores at City Center show “Really Rosie”.

“Quest is one of my favorite drummers, and I definitely learned a lot from just sitting next to him and playing along with him,” says Bhatia.

Bhatia demonstrated a passion for entertaining when she was three years old. Her parents noticed that she loved the rhythm and beats of Bollywood songs that were featured in movies that they all watched together. When she turned five, she pursued her passion for music by enrolling at School of Rock Montclair. She’s taken lessons in singing, keyboard, guitar, and drums, and has also performed with her fellow students in tribute concerts to AC/DC, the Rolling Stones, and the Beatles at music venues around New Jersey.

“I’ve learned about music genres at School of Rock Montclair that I never thought I would enjoy, and I’ve also made great friends there,” says Bhatia, who attends middle school in Montville. “Being a part of SoR Montclair has also inspired my interest in creating my own music and writing original songs, which I love to do.”

Kevin March, the General Manager of School of Rock Montclair, is a fan of Sway’s drumming skills.

“Sway is a very dynamic, very solid drummer,” says March, who is also the drummer for indie superstar band Guided By Voices. “She can read really well, she knows lots of rudiments, and she can play in many different styles, including rock, jazz, Latin, soul, and r&b. Her solos are excellent, and she’s one of the hardest working and energetic student musicians at School of Rock Montclair.”