Joining the rich art scene that is Montclair (Montclair Art Museum, Montclair Film, The Montclair Orchestra, Jazz House Kids, Opera Theatre of Montclair) is the Montclair Theatre Project, a new non-profit theatre organization dedicated to the production and presentation of classic and contemporary dramas, musicals and other performing arts for the Montclair community, including exciting new works in development, featuring local writers and artists.

The new organization celebrates with its first offering, a concert production of “The Oldenburg Suite” to take place on Friday, January 3 and Saturday, January 4, 2020 (7:30 p.m. each night) at Leshowitz Hall in the John J. Cali School of Music at Montclair State University.

“The idea for the Theatre Project is to produce new theatrical works in Montclair to enrich the community and show off our home-grown talent, and we are excited to be kicking off this venture with a concert production of ‘The Oldenburg Suite,'” says Montclair Theatre Project president Betsy Harris.

“The Oldenburg Suite,” with book and lyrics by Montclair native James Feinberg and music by Matthew Dylan Rose, is a sung-through musical about 12 tumultuous years in the lives of the sculptor Claes Oldenburg; his wife, the artist and art historian Coosje van Bruggen; and his brother Richard, Director of the Museum of Modern Art. A saga of 1970s self-invention narrated by Andy Warhol, the show follows Claes as he struggles to overcome his audience’s preconceptions, Coosje as she becomes an artist in her own right, and Richard as he fights to lend stability to the strike-rattled MoMA and invents the modern museum. It features a collage of ’70s musical styles from funk to folk to disco.

“Boy Meets Girl,” Feinberg’s first musical, which premiered at Montclair High School’s Little Theater in 2016, has been performed on the New York stage, across the US, and internationally. His short plays, The Comedy of Chances and Codswallop, were produced at Brown University, and his screenplays The New Yorkers and The Keaton Effect were award-recipients at the Ivy Film Festival. 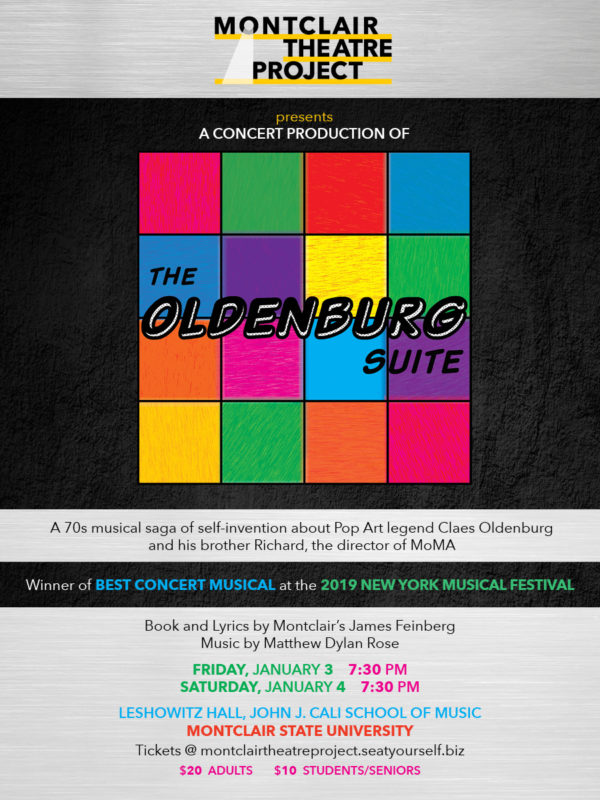