Harry Gonzalez, 29, of Bloomfield has been arrested and charged with the murder of Ralph Jeudi, 32, of Hillside.

Gonzalez allegedly shot Jeudi on December 10 and dumped his body in the parking lot of a liquor store in the 700 block of Belleville Avenue in Belleville.

The investigation is active and ongoing.

These are accusations. All defendants are presumed innocent unless and until they enter a guilty plea or are found guilty beyond a reasonable doubt in a court of law. 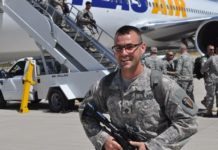