On Wednesday, January 15, 2020, RALPH PUCCI International will host its 4th Annual JAZZ SET, “The Lowdown: Conversations with Christian®,” a one-night-only intimate evening of music and conversation. The evening reunites two of the biggest and brightest stars in jazz today: multi-GRAMMY Award winners, bassist CHRISTIAN McBRIDE and one of the most celebrated voices and pianists of our time, superstar DIANA KRALL. 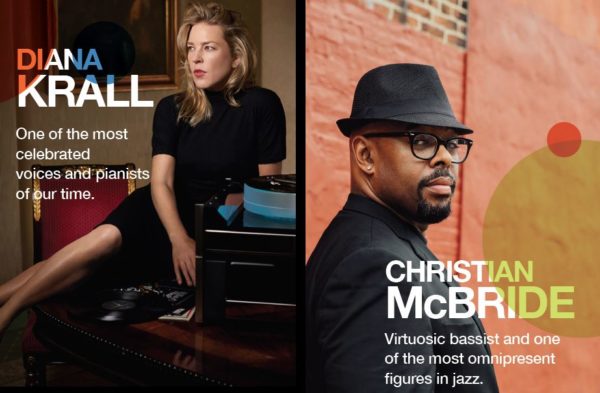 The backdrop is the ultra-modern 30,000 square-foot New York City gallery of RALPH PUCCI International, a special setting filled with limited-edition designs, from furniture to lighting to art. This is the fourth year RALPH PUCCI has partnered with respected music education organization JAZZ HOUSE KiDS and its Artistic Chair CHRISTIAN McBRIDE to turn the New York luxury furniture design gallery into a world-class jazz club.

McBride will be joined by Diana Krall, his good friend who launched her career in New York City around the same time as he did and her meteoric rise has mirrored his own. They have been frequent collaborators on recordings and on stage, including a memorable live performance at the 2016 International Jazz Day All-Star Concert in the Obama White House, where “Diana Krall, in duo with Christian McBride, swung slyly through ‘East of the Moon’” [Jazz Times].

While for 20 years they have watched each other’s ascent, this is the first time the two old friends will come together for a night of duets and conversation reflecting upon their journeys, from little-known musicians to two of the most recognizable figures on the scene today. McBride and Krall will trade solos, tell stories about life in the jazz lane, and share their musical and personal philosophies during this once-in-a-lifetime evening.

And 100 percent of the evening’s proceeds of the RALPHPUCCI 4th Annual JAZZ SET will benefit JAZZ HOUSE KiDS.