Movie lovers in Montclair got an early holiday present at the December 10 Montclair Historic Preservation Commission (HPC) meeting—a preview of the next installment of the Bellevue theater saga. Like your favorite Hollywood movie, there were moments to cheer about, but HPC pushed back on one component of the proposed plan. 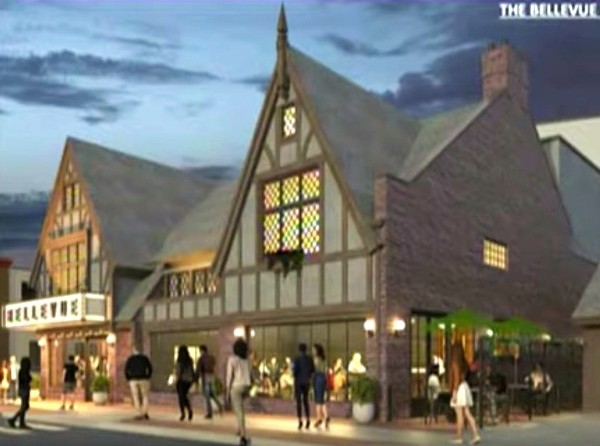 The team that presented included Steven Plofker and Paul Sionas, AIA; movie star Patrick Wilson, one of the partners behind the new Bellevue Montclair, also attended the meeting. Their plan called for a total of six theaters screening both studio and indie flicks, a lounge/bar and a restaurant. According to the proposal, the first floor would feature three movie theaters and a lounge/bar. In good weather there would be additional seating for lounge/bar patrons just outside the theater by the west-facing facade. A restaurant would be on the second floor. The third floor would accommodate three movie theaters. An elevator and other barrier-free components would help ensure the renovated theater complies with the Americans with Disabilities Act (ADA).

In its 95-year history as a functioning movie theater, the Bellevue included amenities such as a balcony and a second-floor restaurant, named the Highgate Hall, that offered full meals such as lobster Thermidor, sirloin tips, or stuffed turkey, according to Friends of Anderson Park’s Lisanne Renner.

The renovation includes wider seats and bigger screens in the theaters. That would reduce the capacity of the venue to 485 seats. The old Bellevue theater, which closed in November 2017, had four theaters that could accommodate 885 moviegoers.

Plofker and Sionas reviewed other components of the renovation which include raising the height of the building by about 13 feet to help accommodate the larger screens and comply with the ADA. The proposal also called for moving the entrance to the building further east. That would create a better configuration for the first floor so moviegoers wouldn’t have to use the lounge/bar to access the theaters.

“We struggled with it, but realized we needed a large enough space to have a meaningful income generator in the bar, restaurant, lounge,” said Plofker.

“We wanted to bring families with children in without them walking past the bar, that’s why we separated the theater entry from the bar,” added Sionas.

One member of the HPC said he felt moving the entry was problematic. Overall, the commission found the rehabilitation of the property appears to be minimal to the building’s characteristics and the rear enlargement does not change the character of the building. HPC recommended the developers:

Plfoker said his team would work on the plan in light of the HPC’s comments. Next steps for the renovation include meeting with the Montclair Board of Adjustments then meeting again with the HPC.