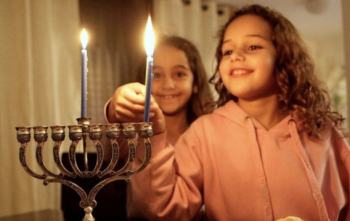 Stacy Stuart and Archie Gottesman had worked together for 25 years when they decided they wanted to try a new venture. The team behind the iconic (and sometimes offensive) Manhattan Mini Storage ads, Stuart and Gottesman considered a few ideas but ultimately decided to do something personally meaningful to them: helping Jews connect to their Jewish roots.

Thus JewBelong was born. Geared towards any Jew, but especially those who have been disconnected from Jewish practice and ritual (referred to on the site as DJ’s – or disengaged Jews), Jew Belong wants to make Judaism joyous and welcoming to anybody who’s interested in being a part of the community. Because, as the website points out, “sometimes Judaism can be more complicated than your last girlfriend.”

“There is such a big world of DJ’s that they don’t know how to get started [on understanding Judaism],” Stuart told Baristanet. “We try to cull it down to basics so they can understand.”

A former DJ herself, Stuart became intrigued by Judaism at the urging of Gottesman, who “sort of demanded I give Judaism a shot” when they were still at Manhattan Mini Storage and before Stuart had given birth to her three children.

“Because of her guidance, I felt like my children would be missing out if we didn’t raise them in Jewish household and understand basic Jewish practice,” she said.

It is just the sort of person that Stuart once was that JewBelong hopes to attract. With sections on bar and bat mitzvahs, Passover, weddings, funerals, and even pets, among many others, JewBelong contains informative and fun descriptions of how to approach each holiday or ritual while emphasizing that people shouldn’t get stressed out about any of it. The section on Shabbat, for example, provides a checklist of things to have on hand during the Friday meal, what to expect at the Saturday service, as well as  blessings, songs and family skits. It also reassures anyone struggling with the whole rest-on-Shabbat thing that they can still go to a soccer game.

The site “started from nothing,” said Stuart, who lives in Verona, and now, she says, more than 40,000 people have signed up for the JewBelong newsletter and even observants Jews have used the JewBelong Haggadah.

Largely self-funded from its inception in 2016, JewBelong recently began attracting funders both large and small.

“Our first couple of years, we were just trying to build interest and awareness,” said Stuart. “But there was always growth month over month, and about a year ago, JewBelong really started to take off. Funders started seeing the impact of JewBelong on the community.”