The Bloomfield Police Department reports a significant decrease in both violent and nonviolent crimes in 2019, continuing a positive multi-year trend that shows enforcement and awareness campaigns are working as intended.

The number of Part I crimes committed in Bloomfield had soared to 1,212 in 2014, following consecutive yearly increases, and threatened to continue rising for years, before the Township of Bloomfield hired former Newark Police Director Samuel DeMaio as Bloomfield Police Director (now Director of Public Safety) at the beginning of 2015. DeMaio instituted changes including community policing, strategically assigning officer shifts during the evening hours, meeting daily with police commanders, utilizing crime analysis, crime mapping and predictive policing and demanding more transparency.

“A huge reason for the consistent, impressive reduction in crime in town has been our emphasis on community policing, so residents associate our police officers with joyous celebrations, as well as when they deal with officers during tense emergencies. Lower crime rates, higher case closures rates, and fewer negative interactions between citizens and police officers make our town a more desirable place for all,” said Mayor Michael Venezia. “Bringing Director DeMaio on is one of my proudest achievements as Mayor and a move that immediately paid dividends, as his leadership completely restructured the culture and tactics of the Police Department.”

Over the past four years, there have been fewer Internal Affairs complaints. Internal and external complaints are down, including a drastic reduction in use of force complaints, from 49 in 2016 to 22 in 2019. This is a testament to the improved culture of the Bloomfield Police Department. Residents are having more positive, and fewer negative interactions with law enforcement officers.

“In the last five years, we brought the number of part I crimes down from 1,212 to 600. That’s 612 fewer victims of crime, which we were able to achieve by reinforcing the culture of public service and respect for the communities we serve. We’ve accomplished this by reconstituting the Police Department with a greater emphasis on working with the community and promoting positive police-citizen encounters through public forums, roll calls, and involvement with public school students and their parents,” said Director of Public Safety Samuel DeMaio. “Our priorities are keeping our communities safe while reducing crime and increasing citizen satisfaction. The crime stats speak for themselves as do the fewer citizen complaints. From 2016 to 2019 we had more than a 50% reduction in citizen internal affairs complaints filed against the department. Our officers understand that their priority is public service, and anyone found to have broken the public’s trust will be punished.”

In 2019, Bloomfield also saw a significant decrease in Part II crimes, including illegal possession of guns, Controlled Dangerous Substances, and DWIs. Director DeMaio cites community policing and police visibility in the community as the biggest reasons that crime has continued to come down. The Department organizes summer Youth Police Academies for Middle School and High School students each year, as well a six-week long Citizen Police Academies. Additionally, events such as Coffee with a Cop and Hooked on Fishing continue to be successful.

The next Citizen Police Academy, a free nine-week course which was created in 2015, and now has expanded to involve Montclair, Glen Ridge, Verona and East Orange law enforcement officers and civilians. This will run every Tuesday night from February 4 to March 31, 2020 from 6:00-8:00 p.m. at the LGI Room of Montclair High School, 100 Chestnut St, Montclair. Residents can apply to participate in this free academy by emailing yaponte@bloomfieldnjpd.com. 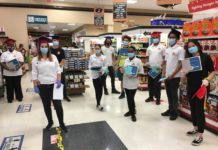 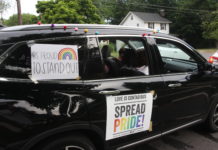