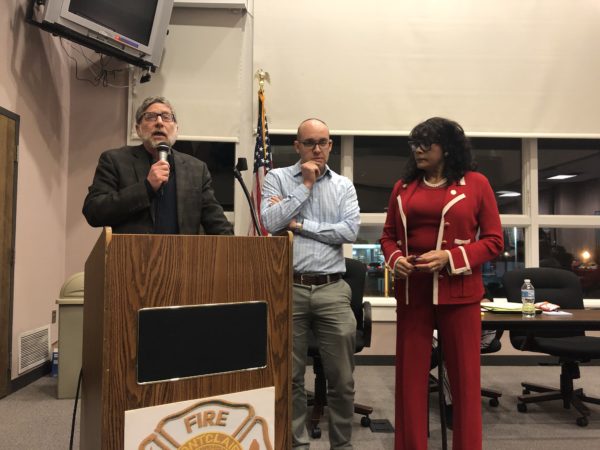 Harris thanked the mayor, the council, and members of the Board of Education for the invitation to speak. After speaking about his early years and experiences growing up in Montclair, Harris brought up Lakewood, New Jersey and stated that it was the Orthodox Center of the U.S.

Harris recalled how he had learned that the biggest Baptist church in Lakewood was sold and how the town had increased in population but that there were “very few black folks left.”

Harris then discussed how he observed something similar in Jersey City.

“Jersey City laid off over 250 teachers made a request for $15 million so that they could provide a thorough and efficient education and only got 5 million last week. So I go to Jersey City, you’re walking down the street with the NAACP and I’m seeing these folks with the long black suits, the curly locks.”

Harris said he was told the men were “trying to buy the properties of the people who live in the neighborhood.”

Harris said there was “fear of being replaced by these strangers who really weren’t friendly. The Hasidics are generally not too interactive with anybody other than themselves. So some stress started to develop because people remember Brooklyn and Lakewood. Are we going to be displaced by these people who are not all that friendly and the public schools in Jersey City have not done a good job in talking about what’s really going on in the community. So I was pleased last week after the unfortunate murder that the president of the NAACP, the secretary of the NAACP was with [Jersey City Mayor Steven] Fulop, the attorney general and the governor in Jersey City saying we really have to get together and increase our relationships.”

“Now it just so happens that section of Jersey City has murders every single week. I will guarantee that before Sunday there will be some shootings along the Martin Luther King Boulevard,” Harris added. “Is there a situation where some lives are more important than other lives? Because I didn’t see the governor and Fulop hanging up in there on a weekly basis when these other shootings went down, so I think we have to have an honest conversation. Not only are all lives important, but the response to murder has to be just as intense.”

Other speakers followed Harris, but no one challenged his remarks until Rabbi David Greenstein of Congregation Shomrei Emunah took the podium.

“To start making the discussion, focus on Jews are buying or Hasidics are not very nice when they go and they talk to other people is just plain sinful. And I really am ashamed that there was applause here and that there was not a single word to stand up except for me because after all, I’m a Jew, so I have to stand up and defend myself. We’re all supposed to be defending each other. Every single person here is an ally. Nobody showed up to this meeting against the agenda of this meeting. So why does the conversation have to be hijacked, into a way of talking that is superficial, that’s full of half truths and complete lies and all of that kind of really unhelpful stuff.”

“Let’s recognize that tarring groups of people with that kind of superficial, stereotypical language is what has created all of the terrible injustice that everyone in this room knows so well. We shouldn’t tolerate people with supposed credentials to tell us how to think. I think that that was really, really unfortunate and I just felt obligated to say something,” Rabbi Greenstein said.

“That is what we are here for tonight. We’re here so that we can have truthful conversations,” Dr. Baskerville said. “I’m here to moderate the discussion. I try very hard not to admonish someone for expressing their opinion, but that’s what we’re here for. So if you hear things, you have questions, put your hand up. If you find something offensive, put your hand up, come on over to the mic. If we don’t have these discussions and if we don’t come forward and say I’m offended, then maybe other people in the room won’t even understand that there’s been an offense. And I’m not going to try to pass judgment on what was meant by anybody’s comments, but that’s what we’re here for tonight.

Montclair Police Chief Todd Conforti also discussed the recent incidents of swastikas seen on desks at Montclair High School as well as the destruction of an ice Menorah that was built on Church Street.

Chief Conforti said information regarding the destruction of Church Street ice menorah suggests that it was not a bias incident.

“We believe it was a 10-12 year old kid, walking down the street unsupervised who knocked it over. I don’t think there was any intention or any, anything behind it other than, just a ridiculous thing to do that the kids do,” Conforti added.

Chief Conforti said the swastika incidents at the high school are still being treated as an open investigation, but “we have an idea of who might have drawn the swastikas.”

Conforti added that overall crime is down in Montclair and that last year it was at an all-time low. He also wanted to reassure the community that bias crime incidents are not on the rise in Montclair.