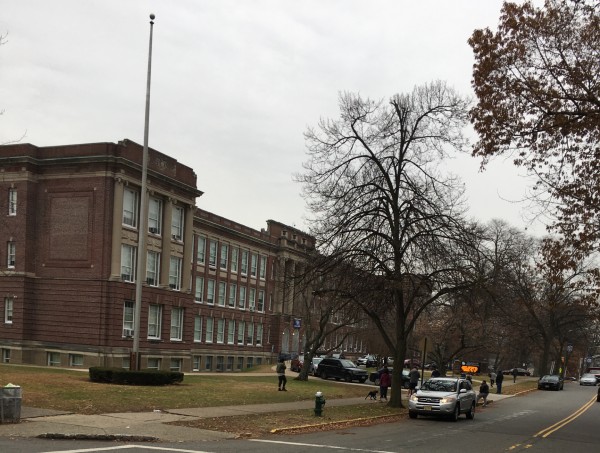 “I feel as if we, as students, have been left in the dark.”

That was the sentiment expressed by Olivia, a Montclair High School junior, a view shared by many students following the gun lockdown that occurred on November 27 around 11:00 am.

It was the first lockdown in response to a possible weapon in school, as far as anyone could remember, and it came at a time of increased deadly school shootings around the country.

Students say administrators and teachers have not talked about the situation since.

Principal Grosso said he could not comment except to share that “MHS and the district continue to partner with the Montclair Police Department to ensure the safety and security of all students and staff.”

Four teachers who had initially agreed to answer a few questions for this article, later apologized and declined, as they were advised not to discuss the issue.

Katya Wowk, director of Communication of the Township of Montclair, sensing frustration by Montclair residents on social media, published the police report to the Township’s Facebook page on the day of the lockdown:

Montclair High School was temporarily placed on lockdown as was nearby Renaissance School due to its close proximity to the high school. Montclair Police responded and quickly located the student in question outside of the George Innes School. No weapon was recovered. Further investigation revealed two other students with potential involvement in the incident. Those students were identified and once it was determined that there was no longer a threat to the students and staff, the lockdown was lifted.

There were no reported injuries as a result of the incident. No weapons were recovered and at this time, no arrests have been made. The incident remains under investigation by the Montclair Police Department.

Wowk empathizes with the families of Montclair students saying it was “an extremely serious situation, and I can appreciate that both parents and students were going to be very upset.”

For Lily, a freshman, the scariest part was “not being told anything about what was happening.” Violet, a junior, recalls how “being in the basement and not getting any service meant I couldn’t respond to any of my parents’ messages.” Anna, a freshman, said “being so close to my twin sister made me think I honestly don’t know what I would do without her.”

Even though most students followed the rules, “there were still the usual clowns in class that thought it was funny to make a joke out of the lockdown, which is unfortunate because they were putting EVERYONE at risk,” says Anna, a junior. And according to Ross, “the teachers also didn’t know what was going on, which was scary.”

In the 32 years Mr. Valentine, a security guard, has worked at MHS, nothing like the lockdown has ever happened. He states, “as a whole, things went very well. And I think the teachers feel the same way.”

Parents in the district received emails and notifications from Montclair Schools principals as well as Interim Schools Superintendent Dr. Nathan Parker on the day of the lockdown. But many students still feel unsafe.

“There was no formal explanation afterwards from the school, and there were no apparent changes made to prevent something like this from happening again,” says Isabel, a junior. “It almost feels like it didn’t happen.”