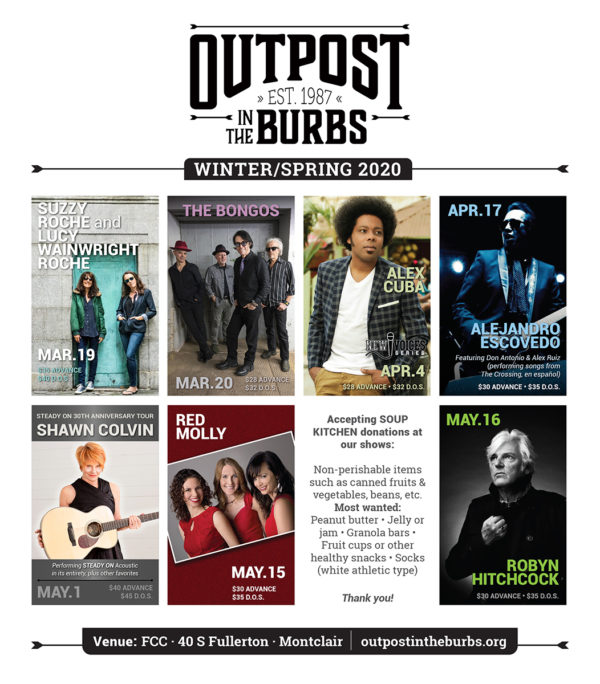 All concerts will take place at 8 p.m. (7:30 doors) at the First Congregational Church located at 40 S. Fullerton Avenue in Montclair.

Other shows in the spring series include:

Want to win tickets? Leave a comment below telling us which show are you most looking forward to at Outpost this spring. One winner will be picked at random to choose a pair of tickets to a show of their choice. Enter by 5 p.m. March 3.

Suzzy Roche and Lucy Wainwright Roche have shared a life on the road. Their recording Fairytale and Myth, the first recording collaboration between them, won the Vox Pop best singer/songwriter CD for the Independent Music Awards.  Their latest CD called Mud and Apples has also been nominated for an Independent Music Award.  Their show is a fun filled evening of smart, thoughtful, songs with plenty of familial harmonies. Lucy is celebrating a brand-new release Little Beast, winner of 2019 Independent Music Award for best singer/songwriter album, and Suzzy has just finished putting together a collection of songs written by her late sister: Maggie Roche ~ selected songs: “Where Do I Come From?” and is looking forward to the release of her second novel The Town Crazy in 2020.
Suzzy Roche is a singer/songwriter/performer/author and founding member of the singing group The Roches.  She has recorded over fifteen albums, written music for TV and Film, and toured extensively for thirty years across the U.S. and Europe.

The Bongos
The Bongos were founding fathers of the Hoboken pop scene of the 1980s and, with a handful of others, were progenitors of the Indie Rock movement that followed. Led by Richard Barone, the group recorded its debut album Drums Along the Hudson (1982, PVC Records) primarily in England. With its unique mix of Beatlesque melodies, experimental outbursts, sensual rhythms, power pop and punk sensibilities, the album was a critical smash on both sides of the Atlantic and a college radio staple in the U.S., spawning their Billboard-charting cover of the T.Rex classic “Mambo Sun”. Relentless touring led to signing with RCA Records, the addition of guitarist James Mastro, and the release of the group’s sweeping signature song “Numbers with Wings” (1983, RCA). Its accompanying video became an instant MTV favorite, earning a nomination at the first Video Music Awards. Tracks like “Barbarella” and “Tiger Nights” fared well on the fledgling alternative radio format and further raised the group’s profile. By 1987, each member of the group, Barone, Mastro, bassist Rob Norris, and drummer Frank Giannini began to pursue solo projects and other collaborations, and performances by The Bongos became increasingly rare. In 2013 they reunited to perform on the final night of their beloved home club Maxwell’s in Hoboken, the venue where they were also the first act to perform. Since then they have reunited for special events and mini-tours. This concert appearance will mark one of a few appearances to celebrate four decades of Hoboken pop.