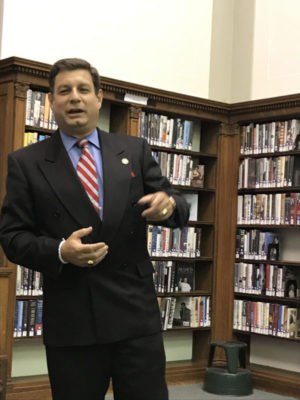 A lively discussion on whether business owners or the town is responsible for maintaining sidewalks and tree pits in front of their stores was one of the key issues discussed at the February 3 First Ward Community meeting at the Bellevue Library. Councilor Hurlock also responded to a question from a resident on whether he’ll run again for Town Council. “I’ll be running for something,” said Hurlock.

Hurlock kicked off the meeting by reporting that renovations to the baseball field and clay tennis courts at Mountainside Park were completed. Over at Yantacaw Brook Park, the township installed a new path and extended it around the pond and added trash receptacles. Lights are scheduled to be installed in Spring 2020. Moving to Alonzo F. Bonsal Wildlife Preserve, Township Attorney Ira Karasick reported that Montclair is conducting a land survey to address homeowners on the Clifton side of the park who have built structures, such as gazebos, that are encrouching on to property that rightfully belongs to Montclair. After the survey is completed Montclair will ask those Clifton homeowners to remove their structures from the Montclair side. The Friends of Bonsal are planning to plant trees on the Montclair side once the area is cleared according to Karasick.

The issue of cluttered streets came up. Hurlock said he is working with township officials on proposals that will restrict parking by the Northeast, Buzz Aldrin and Bradford schools to address concerns from parents as well as first responders about parked cars preventing fire trucks from accessing those streets.

“Sometimes cars stop and sometimes they don’t and that can be a real problem,” said Hurlock. “Regardless of the number of flashing lights or police writing up cars that don’t stop for people in the crosswalks it’s always going to be a problem.” Hurlock said he’s been trying to get data from the state on the number of pedestrian incidents since the law was changed. The state hasn’t sent that data. To address pedestrian safety, Hurlock reported the township installed more flashing yellow lights on Grove and Park streets with more coming and installed a crosswalk by Grandview and Grove street.

The councilor announced the 8th Annual First Ward Beautification Day for Yantacaw Brook Park, Mountainside Park and the First Ward business district is being planned (no date yet) for this April.

“It’s a great example of what can happen with public private partnership,” said Hurlock. “The town supplies the gloves, the mulch, the recycling and garbage bags and the residents provide the muscle, coffee and doughnuts.”

Maintaining Sidewalks and Tree Pits in Front of Businesses

One merchant who runs a business in the First Ward asked who’s responsible for maintaining the areas in front of local businesses because she’s noticed a decline the the upkeep of those areas. A yearly beautification day just isn’t enough she said. Hurlock stated the according to the ordinance the business owner is responsible for maintaining the sidewalk and tree bed in front of his/her business. Food establishments are supposed to have and maintain their own trash receptacle in front of their business. At one point the town council was ready to start issuing citations to business owners for not maintaining the tree beds in front of their stores, but the Upper Montclair Business Improvement District asked the Council to refrain from doing that.

“The bigger problem is the commercial property owners who don’t have their own receptacles, who are not cleaning up the tree beds and not doing what they’re supposed to do,” said Hurlock.

Street paving should resume in March or April, depending on the weather. “We’ve done more paving in the last seven and a half years than in the last 70 years. I will take that to the bank,” said Hurlock.

One resident mentioned that there are long stretches along Valley Road that are dark at night. Assistant Town Manager Brian Scantlebury advised the woman that PSE&G is responsible for street lights and she can go to their website to report an outage.

Hurlock updated residents of the town’s debt service. Since 2012 when Mayor Jackson and the current council, including Hurlock, was elected, the township has reduced its debt by $69 million–from $232 million to $163 million–and improved its bond rating to AAA, the highest rating. This means if the township had to borrow money it could do so at a lower interest rate compared to other municipalities with a lower bond rating. Scantlebury added that while the township has initiated big infrastructure projects like paving streets, it has paid for those projects without incurring more debt.

Hurlock asked Kathleen Bennett, chair of the Montclair Historic Preservation Commission, to update attendees on the Bellevue theater renovation. Bennett reported that on December 10 developer Steven Plofker presented his plan to the HPC. It proposed to move the entrance/marquee from the center of the building to the eastern corner of Bellevue Avenue. HPC recommended the entrance/marquee remain where it is. Pfolker said he would rework his proposal.

Helen Fallon, vice president of the Montclair Historic Center briefed attendees on upcoming events which include: Cooking Over a Hearth on Feb. 14 at 4:30 p.m., at the Crane House; President’s Day for Kids on Feb. 17 at 10 a.m., at the Crane House and a screening of Price of Liberty: Mississippi – Is This America? On Feb. 18 at 7 p.m. at Montclair Film, Cinema 505. Get more information here.

Ilmar Vanderer, Montclair Library trustee, who was instrumental in the Bellevue Avenue branch’s renovation, spoke about future renovation plans, the library’s programs and how residents can support their library.

Carmel Loughman of the Montclair Planning Board briefed the audience on the Monclair Literary Festival which takes place from March 25-29.