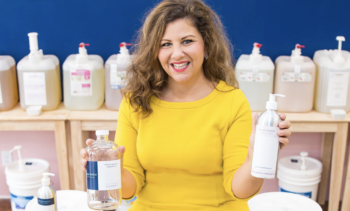 Deanna Taylor-Heacock was a stay-at-home mom who had always had an entrepreneurial spirit.

“If I saw an empty storefront, I would talk to my friends about what would go there,” she said. “I always had a bunch of crazy ideas.”

But nothing compelled her to get serious about opening a business until 2018, when she had an epiphany after opening her American Express bill.

“It was ridiculous,” she said. “I realized I was spending more money staying at home than when I had been working,” by running to Target, Walmart and the grocery store several times a week while her kids were in school.

So Taylor-Heacock, who lives in Maplewood, put a plan into place – streamlining her shopping trips so she only shopped for food once a week and household goods once a month – and stuck to it. At the end of the year, she calculated that she saved $10,000 from her new system.

But that was just the beginning. She also began to realize how much waste she was generating from buying shampoo bottle after shampoo bottle, detergent after detergent. That was when her “entrepreneurial spirit” became a concrete idea: a refill shop. She came up with a business plan, a name for the shop and a concept for the bottle. Thus, Good Bottle Refill Shop was born.

The shop – the first refill store in New Jersey – opened in September 2019 at the SOMa General Store Cooperative in Maplewood, a Chelsea-Market type shop in which Good Bottle serves as the anchor. Customers can bring in their own bottles, or purchase them at the store, and fill up on a range of environmentally-friendly household items such as shampoo, conditioner, body oil, hand and dish soap, all purpose cleaners and more. (Good Bottle is also about to get a new neighbor: Dry Goods Refillery, set to open at the Co-op next week, will be selling package-free dry goods, including grains, flour, pasta, cereal, nuts, spices, dried fruit and more.)

So far, the community has embraced Good Bottle. “They love refilling,” Taylor-Heacock said, and January sales were brisk. She hopes one day to expand, perhaps even to Upper Montclair.

In the meantime, Baristaville residents can visit Good Bottle in the SOMa General Store at 1875 Springfield Ave. in Maplewood, and visit the Waste Not Montclair Facebook pages for more ideas on how to reduce waste.