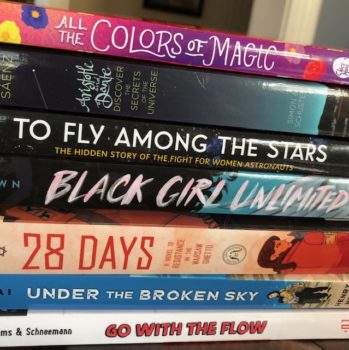 Social distancing is rough on all of us, but maybe it’s most difficult for our tweens and teens, separated not just from their friends but also from their routines. Families may also be experiencing some friction because of boredom, cabin fever, or just more of the same. As the days go by, infusing our book collections with new pages to read can – maybe a little – alleviate some of the aggravation we’re all experiencing. As was mentioned in our preschool and early elementary round-up of books, local bookstores are doing their best to stay open and stay safe. Watchung Booksellers is taking online, text, and email orders. Curbside or “takeout” orders are available, as is delivery. Montclair Book Center’s hours and policies are listed here. East Side Mags is also offering remote ordering and curbside pickup for comic book and graphic novel needs.

Check out these selections and consider supporting our local businesses by purchasing a book — then do a no-contact, wiped-down-book exchange on your block with other families! 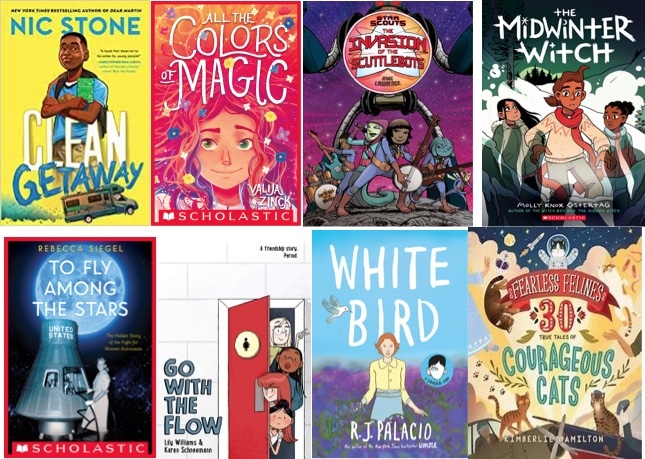 ALL THE COLORS OF MAGIC by Valinja Zinck is an accessible chapter book that features magic and identity and a journey of discovery. There is danger, but it’s not nearly as dire as some recent older elementary/middle grade books include. The language uses words like torrent, parcel, and trance, but most of the vocabulary is very simple, making it a reachable chapter book for reluctant readers. Penelope, the main character, is quirky and likable, and elements like a talking road and family mystery will kee pages turning.

INVASION OF THE SCUTTLEBOTS by Mike Lawrence is the third and final installment of the Star Scouts series, and it takes on integration, disinformation, and pop music in a funny and adventurous tale of friendship’s ups & downs.  picks up as new BFFs Pam and Avani have convinced Star Scouts to combine the oxygen and methane breathers into one troop. Mabel, who in League of Lasers had issues with Jen, Avani’s best Earth friend, now is jealous of Avani and Pam’s bond. Her frustration at feeling left out, which is partly fueled by puberty, is directed towards a “scuttlebot” that immediately sets out to destroy Avani and Pam’s friendship. Let the invasion begin!

CLEAN GETAWAY by Nic Stone will entice middle grade readers with relatable choices and learning about American history through the eyes of an 11-year-old nicknamed “Scoob.” Generational relationships, a road trip utilizing The Green Book, flawed role models, lessons about civil rights and racial segregation, and the (sometimes uncomfortable) enticement of a family secret all make for a gripping novel. Scoob is a likable narrator, and the language is easily readable without being condescending.

R.J. Palacio’s WHITE BIRD: A WONDER STORY continues the storyline that was hinted at in “The Julian Chapter” via Julian’s Grandmère, who lives in France. Through simple illustrations and language that straddles teenage and adult, readers go back to her childhood and watch as Julien, a bullied boy, is insulted for his father’s work and his physical abilities due to polio. While there is violence in words and actions depicted, and direct references to the horrors of The Holocaust, this graphic novel is accessible and appropriate for the intended age of 10+, especially as a book to read as a family. Mirroring the theme of self-reflection in WONDER, WHITE BIRD depicts Sara, Julian’s Grandmère, as a typical girl who goes along with teasing and bullying of Julien and regrets it. Over the course of the graphic novel, she learns to become better even as a deeply violent and genocidal version of her actions affects her own life and community in profound ways.

THE MIDWINTER WITCH by Molly Knox Ostertag is the third and final graphic novel of the graphic novel series that includes The Witch Boy and The Hidden Witch.  A wonderful twist on traditional middle grade themes of identity, conflicts with family and friends, and solidifying values and a path forward, Ostertag wraps up the story of Aster and his family and friends by staying true to her focus of gender non-conformity and belonging. The friendships and torn loyalties will ring true for most middle grade readers.

GO WITH THE FLOW by Lily Williams and Karen Schneemann addresses a sometimes awkward subject, menstruation, with matter-of-fact and entertaining scenes that center on a group of high school sophomores who are fed up with the school’s lack of tampons and pads, and they foment a menstruation revolution. The joyful adventures of the friends intertwine with their activism, effectively normalizing something that is a fact-of-life for (at least) half the population. Crushes, menstrual cramps, friend drama, empty tampon machines, prom invitations, and fear of period leaks all get a spotlight in this graphic novel. A delightful and relatable romp through real life.

TO FLY AMONG THE STARS by Rebecca Siegel is a non-fiction telling of the women of Mercury 13, who hoped to launch into space along with their male counterparts. This book includes behind-the-scenes tales and a stark look at gender politics affected the opportunities for women and space flight. Drawing on news articles, memoirs, interviews, letters and videos, Siegel’s compelling narrative gives readers insight to a little known part of the American space program.

FEARLESS FELINES: 30 TRUE TALES OF COURAGEOUS CATS by Kimberlie Hamilton is filled with mini-biographies of real cats that proved that they really do have nine lives. Each biography is accompanied by an illustrated portrait, and there are pages of feline facts like “How to Tell if a Cat Loves You” and “Feline EntrePURR-neurs.” It’s a whimsical, colorful collection. 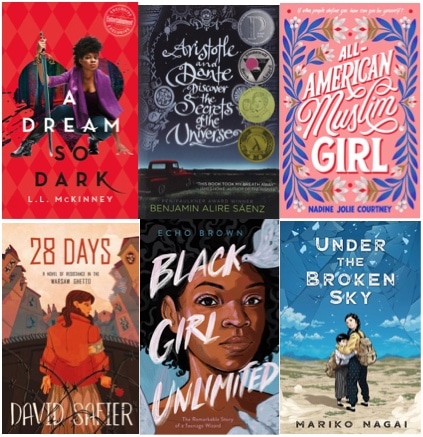 BLACK GIRL UNLIMITED by Echo Brown draws on the author’s experiences growing up and instills magical realism to temper her experiences throughout the novel. Echo’s life is tumultuous with a drug-addicted mother who sometimes passes out deeply enough to sleep through a fire, the stress of moving between the two worlds of a privileged “high achieving school” and her crumbling neighborhood home, a close friend who has a terrible accident, and a brother in juvenile detention. However, Echo is a wizard, like her mother, and she sees veils over people who are troubled, gets advice from characters in artwork, and is able to manipulate reality to help those she loves. None of the “magic” is fanciful; it is gritty and utilitarian. The very likable Echo navigates her world with a strong moral sense and thoughtful grace. NB: Child sexual abuse and rape is depicted.

UNDER THE BROKEN SKY by Mariko Nagai is a story of survival and unimaginable choices told through verse with a 12-year-old’s point of view. Set in 1940’s Manchuria, near its border with the Soviet Union, the book opens with emotional heartache as sisters Natsu and Asa lose both their parents. Orphaned, the turmoil only gets more serious as their town is evacuated due to Soviet invasion and they cross rivers and wide lands to find safety. 12-year-old Natsu must make a devastating choice so she and her sister can survive. This book of verse is an effective World War II history lesson wrapped in a coming-of-age story.

ALL-AMERICAN MUSLIM GIRL by Nadine Jolie Courtney is a remarkable young adult novel that centers on a girl exploring her identity as a Muslim in the midst of family, peer, and religious influences. Allie Abraham is confronted with both her privilege as a Muslim who can “pass” as a white American assumed to be non-Muslim and the constant tension of modern-day Islamophobia. Many readers will relate to the struggles depicted, regardless of their personal identities. However, young American Muslims will find particular solidarity in the events, identity struggles, and personal journey of the main character.

28 DAYS by David Safier is subtitled: A Novel of Resistance in the Warsaw Ghetto. It is Warsaw in 1942, and Mira, a 16-year-old Jewish girl, is able to smuggle food in to help her family survive. The 28 days depicted in the novel are filled with love, pain, danger, humiliation, defiance, and making the choice of who you really are, what you would do to survive, and how you want to behave towards others. All this is against the backdrop of heartbreak in the wake of Nazi genocide. An emotional rollercoaster, readers will relate to the likable Mira even if they don’t always agree with her decisions.

A DREAM SO DARK by L. L. McKinney continues the adventures a heroic Alice begun in A Blade So Black without so much as a deep breath before jumping in, and it lives up to the expected adventurous thrills. Through this Young Adult fantasy we get a deeper world in Wonderland, more honest relationships for Alice and her family, and delicious complications of the heart and backgrounds between characters. McKinney continues to display her skill at inner monologues and fight scenes. However, while the story begins with immediacy, the pacing for the first third feels sluggish at times. Thankfully, the new details about the characters and the reader’s affinity for Alice, not to mention her companions, keep interest. This second novel in The Nightmare-Verse will leave readers both satisfied and yearning for more, which is coming in the next book, A Crown so Cursed.

ARISTOTLE AND DANTE DISCOVER THE SECRETS OF THE UNIVERSE by Benjamin Alire Sáenz tells the story of Aristotle Mendoza, called Ari, an insecure 15-year-old with few social connections and Dante Quintana, a confident teen who seems to have it all together. The two become fast friends, starting with swim lessons, and we follow them through two years of joys and trauma, relationship of ups and downs, mutual attraction and rejections, and all the hardships of coming-of-age. This novel has won multiple awards, including the Stonewall Book Award, for good reason. The writing sings, and the short chapters and deeply developed characters make the novel accessible for teenagers (and adults!) of most reading abilities.

Montclair and COVID-19: When To Self-Quarantine