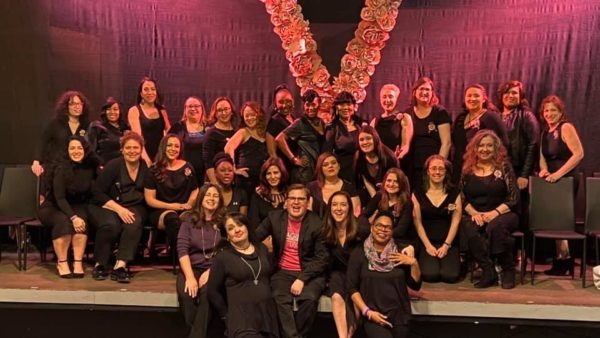 Vaginas were center stage for three nights last week at Montclair’s Studio Playhouse as two-dozen women performed Eve Ensler’s The Vagina Monologues under the direction of William Michael Harper. The performances, produced by V-Day Montclair, raised thousands of dollars for Start Out Fresh Intervention Advocates (S.O.F.I.A.), a local domestic violence awareness and advocacy non-profit. The New Jersey-centric cast included many local residents, some seasoned actors, and several women who had never been on stage. Demand was so high for tickets that the original two-night run was extended with a third performance.

The audience laughed at stories about Angry Vaginas and Moans. They wept for the women of Bosnia and the systematic rapes they experienced as an act of war. The audience shouted Cunt! in chorus, some hesitantly and some joyfully. They also murmured recognition as stories were shared about discovering orgasm and clitorises, remembering sexual trauma, recalling conflicting youthful experiences, rejecting beauty standards, and discovering self-love. The word “vagina” was repeated over and over, as were many euphemisms. Each audience member had a favorite monologue…or three. No one left the theater unmoved.

As powerful as the production was for the audience, the impact it had on the cast was even more significant. The two dozen cast members ranged in age from 20 years old to over 70. With a range of racial, ethnic, religious, sexual orientations, and geographic backgrounds, the actors brought a wealth of lived experience and perspectives to their roles. The women also had a wide variety of reasons for participating in the production.

The humor of the show served as an excellent tool to get people to engage with the material and the starkness of the brutal stories. Adee Shepen, Montclair

The show, the cause, it’s all about women, connecting, sharing and helping other women. As the saying goes, ‘We are the ones we’ve been waiting for.’ Nina Nsilo-Swai, Montclair

Before, I felt that being a “Vagina Warrior” was about shutting down the violence against women, but now I also see that it’s about embracing what it is that makes us. Christina Cruz, Verona

Having survived life-long domestic abuse situations, I am deeply grateful to have connected with people who also found the work and cause important like the SOFIA advocates, cast, production team and audience members. Being in the Vagina Monologues was a uniquely validating experience. Diana Martinez, Montclair

It has been an absolute honor and a privilege to be part of this production, and to share the stage with these amazing women. They have delighted me, surprised me, and supported me, and each other, at every turn. Selma Avdicevic, Montclair

There was simply so much love, support and acceptance amongst the cast — we were all essentially strangers to each other before last week. It was just a mutual admiration society backstage. Amy Horowitz, Montclair

When I performed the introduction to “I Was There in the Room” in front of my family, it brought tears of joy to my eyes. I got a little choked up, but it helped me explain how in awe I felt when I was invited to witness the birth of my granddaughter! Angela Williams, Orange 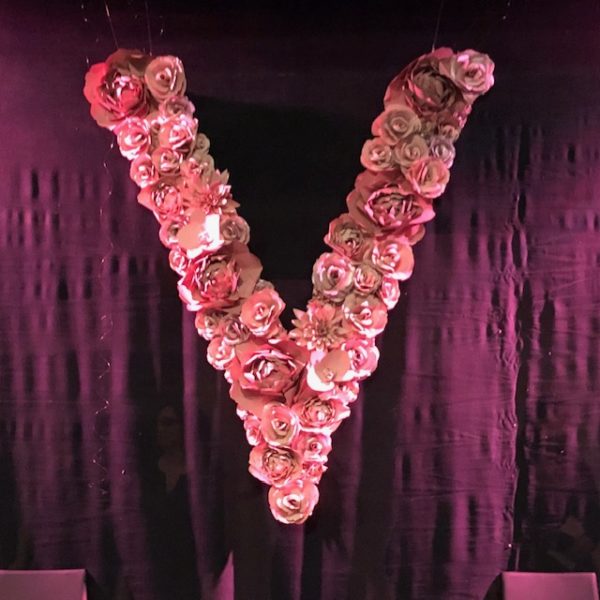 Since early November the V-Day Montclair production team, made up of William Michael Harper, Katie Egan Rotio, Jessica Phelan, and Alyssum D’Aoust, has been preparing and organizing for the event. Each donated their time and talent to make the event a success, and the result was a moving and thrilling show for all involved. Alyssum D’Aoust, of Bloomfield, who presented a monologue as well as producing the event, said, “Having seen past productions of The Vagina Monologues, I knew firsthand the impact the show can have on an audience. I was beyond honored to join the production team and work towards raising funds for the vital work S.O.F.I.A. does within our community.” Katie Rotio, also of Bloomfield, designed the logo, the huge decorative V covered in paper flowers, the program, as well as wooden earrings and pendants that were sold to raise additional funds. She shared that she found a Facebook post of Will’s in October and jumped at the chance to get involved. “I am genuinely afraid that we, in this country, right now, are going backwards in our support and protection and equal respect of women. I had wanted to get involved somehow, whether politically or with a non-profit. This show was exactly what I was looking for.”

Director William Michael Harper has been involved with the VDay Foundation for over 15 years. He shared that he’s seen surprising victories, but many more devastating losses including the rise in statistics of physical violence against women, the loss of reproductive rights around the USA, and the global rise of right wing authoritarian governments. He says, “VDay’s help is needed now more than ever, and that’s why I was so thrilled to have the chance to bring this important work back to my own state with a cast and crew of 30 uniquely talented and wildly creative vagina warriors. Our work is over only when the violence and stigma ends.”

Everyone associated with the production donated their time and talent; all the proceeds from ticket sales and product sales, after theater expenses, will go directly to Start Out Fresh Intervention Advocates. During the show, representatives from the non-profit spoke about their mission and how donations are used. “The Vagina Monologues works to dispel the stigma of discussing women’s bodies, which is connected to violence against women’s bodies, including domestic violence,” said Cynthia Walker, Founder and Executive Director of S.O.F.I.A. “The work we do at S.O.F.I.A. is similar to the goal of the play: to raise awareness and amplify topics and voices that are often pushed aside. We are deeply humbled and grateful for the exposure and monetary support this event has given us.”

For those who missed this year’s shows, rest assured that the team plans on mounting another production in 2021.

The author is vice president of the Board of Start Out Fresh Intervention Advocates.