Tomorrow (Tuesday, April 28), at a little after 12 p.m., residents of Baristaville should look toward the skies. That’s when pilots from the U.S. Navy’s Blue Angels and the U.S. Air Force’s Thunderbirds precision flight teams will fly over NYC and northern New Jersey to salute frontline Coronavirus workers. 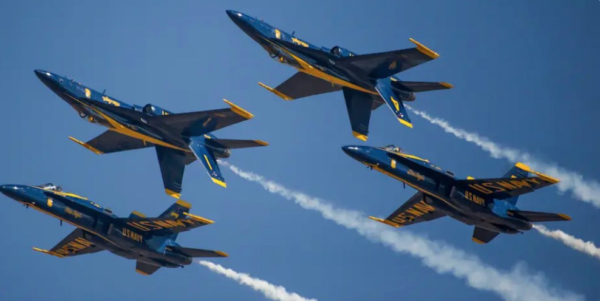 They’ll fly by the George Washington Bridge, from there they’ll fly over Bergen, Hudson, Union and Essex counties. Then they’ll zoom southeast to Brooklyn, over Staten Island, head east over Long Island and north over Connecticut. When they’re over the White Plains area, they’ll head south, zipping over the Bronx, eastern Manhattan, Queens and Brooklyn on their way to flyovers by Trenton and Philadelphia.

“We are truly excited to take to the skies with our Navy counterparts for a nation-wide tribute to the men and women keeping our communities safe.” said U.S. Air Force Lt. Col. John Caldwell, Thunderbird 1 and mission commander for the flyover. “We hope to give Americans a touching display of American resolve that honors those serving on the frontline of our fight with COVID-19.”