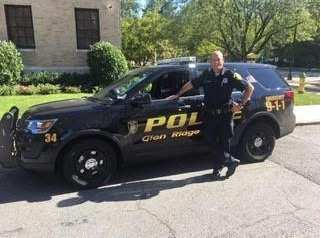 Glen Ridge Police Chief Sheila E. Byron-Lagattuta writes about the life and untimely death of Officer Charles “Rob” Roberts – a beloved and dedicated member of the department and community:

At the age of 45, Rob fought a courageous battle against COVID 19 and passed away on May 11, 2020 at Lenox Hill Hospital in New York City. He had been hospitalized there for just shy of three weeks after members of his own squad and our volunteer ambulance squad came to his aide. The doctors and nurses at both Mountainside Hospital and Lenox Hill Hospital all acted in valor to save his life.

Officer Roberts worked tirelessly at keeping our community safe and I can say with certainty that he was known by face or name by both children and adults alike after serving the Borough for 20 years. Many were privileged to have met Officer Roberts in his official capacity as a bicycle officer, certified car seat installer, DARE/LEAD instructor.   He held the honor of being the most senior officer within the patrol division and served as a detective and a field training officer within the department. Rob never missed an opportunity to support law enforcement races such as the Law Enforcement Torch Run which benefits the Special Olympics and the Tunnel to Towers Run honoring the lives of first responders lost on September 11, 2001.  Rob was a mentor within the department and the entire Borough; and today we have truly lost a hero to all.

The loss of Officer Roberts has extinguished the presence of a pillar and staple within the law enforcement community and the Borough of Glen Ridge. Despite our loss, the ever-lit green front porch lights at headquarters will continue to serve as a beacon for those in need. Rest easy our brother in blue, you will never be forgotten and have left a permanent mark on each life you have touched. To have known you is to have loved you.

Please continue to keep Officer Robert’s family, friends and members of our department and all first responders impacted by Covid-19 in your thoughts and prayers