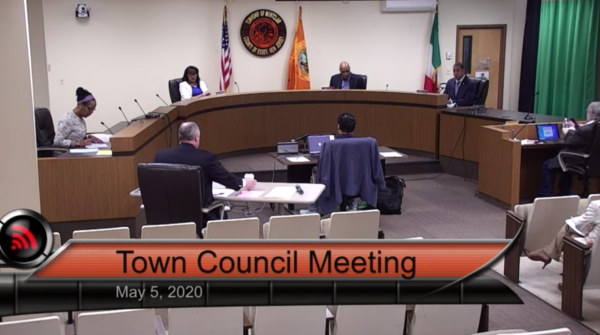 Montclair Council, at its regular conference meeting Tuesday, unanimously passed a resolution this evening to extend the Q2 property tax payment grace period to June 1. Council took immediate action to ensure the resolution was on tonight’s agenda after the governor signed Executive Order 130 last week to allow this.

Councilor Hurlock, asked Township Manager Timothy Stafford to explain how the township was able to do this.

“We have, through the finance committee and the governing body, been following this, and the governor governor’s executive order 130, which was issued last week. We’ve been following its progress for the better part of the month. When the governor issued the order I believe April 28th, the finance committee met and discussed the issue, the possible results and the ramifications in that direction. Our chief financial officer and our financial consultant dived in immediately and analyzed every possible contingency resulting from the possible granting of an extension of the grace period for payment of 2020 2nd quarter property taxes, without interest on or before June 1. Resultantly, this resolution was put on the agenda,” Stafford said of the process.

Councilor Spiller commended Stafford as well as Councilors Hurlock and McMahon, and Mayor Jackson, members of the Finance Committee, for their strong financial leadership over the last eight years.

Leafblower Use During COVID-19

The council also voted to pass a resolution that urges landscapers and residents to halt the use of leaf blowers during the COVID-19 health crisis.

Spiller, who said he worked with Councilors Schlager and Russo to craft the language, spoke about the resolution.

“We’ve been hearing from a number of residents and that a number of individuals are home, remote learning or teaching or remote working and hearing the noise, each and every day. It is something that is a challenge as people try and do work,” said Spiller, adding that the resolution was written while being “equally mindful of the fact that, due to the governor’s executive order, there is absolutely nothing that can be further banned that he has not already done.”

Spiller said the resolution hopes to strike a balance, which is to recommend to anyone who is potentially about to use a leaf blower that they consider not to, or try and use it as infrequently as possible.

The resolution states: “The township of Montclair does hereby urge landscapers and residents to limit as much as possible the use of leaf blowers and other loud machines that generate particulate matter pollution during the current emergency, consistent with safe practices and restrictions imposed by the crisis, including wearing safe masks, face masks, and further that the township disseminate this information.”

Dr. Baskerville thanked her council colleagues for getting on board with this issue, stating she had raised it two weeks ago and wanted to get it on the agenda but “that’s when we were told that it was illegal. I’m happy now that we have something that will satisfy the law that is not telling people what to do, but it does give them option because certainly this is something that’s near to near and dear to my heart as I watch young people in particular and seniors that have, medical conditions that are exacerbated by this type of thing,” said Baskerville. “The intrusion of the noise while people are at home is also a concern.”

Councilor Russo, who said he was teaching remotely from home, said gas powered leaf blowers are a terrible imposition

Councilor McMahon said he would abstain from the vote, as he didn’t agree with the resolution, describing it as a “little bit overwrought” and adding that town workers use these blowers.

Mayor Jackson expressed that he would join McMahon in abstaining.

“I’ve talked to health officers, in other Essex County towns and I have not heard any conversation or any objection to the fact that the leaf blowing actually creates any issues with respect to health. That’s why I think we’re not seeing any towns that have instituted a ban [as a result of COVID-19 crisis].

Mayor Jackson then voiced concern that the resolution might be a first step toward banning leaf blowers, as other towns have done.

“I believe that the unintended consequence of that is the employment of those individuals who are employed by the landscape companies for getting to a job and getting it done quickly and moving on to the next one. This is how they make money, how they feed their families,” said Jackson. “And to me, going that route will then make it more likely that some of those people are going to lose their jobs. I understand we have a lot of people who go to a very high paying jobs in the city and Newark and other places like that who are home,, but when, God willing, life returns to normal, they’re going to be going back to their places of employment and not worried about who’s blowing a leaf blower or anything else. And the poor guy who now is out of work? It’s a slippery slope.”

Opposition to leaf blower use has a long history in Montclair and the issue has come before this council previously.