Red Nose Day, a campaign with the mission to end child poverty, is next Thursday, May 21, but Tom Hall is celebrating tonight. Joined (virtually) by Scoundrel Films and Bellevue Montclair’s Luke Parker Bowles, the pair are once again embarking on a movie marathon to raise funds – this year for children and their families impacted by the COVID-19 pandemic.

Parker Bowles and Hall have watched movies for 24 consecutive hours in the past, but they are upping the ante for their fifth year and competing to see who can watch the longest. 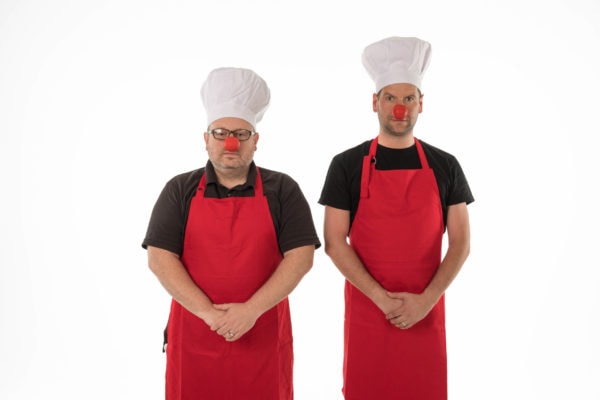 As a team, they have raised more than $83,000 from friends, family and colleagues during their last four marathons. This year, they want to bring their five-year total to over $100,000, and to do so, they are collaborating with Comic Relief US and Red Nose Day to encourage more people to join in and create their own movie marathon experience — 12, 24, even 36 hours — to support Red Nose Day’s mission to help children impacted by the global COVID-19 crisis.

Both Parker Bowles and Hall will start watching movies tonight (Thursday, May 14), at midnight, and keep going as long as they can. Hall typically prepares by taking a seven-hour power nap (banking some sleep hours helps you stay awake, he says) and then brews a big pitcher of ice coffee before watching starting his movie marathon.

Even so, this year, Hall concedes, will be much harder.

“It’s an ultra marathon, and as a professional watcher, I knew we needed to up the ante, raise our game this year. I’m going to watch until I can’t watch anymore and go past normal human endurance,” says Hall, who is predicting that will be somewhere between 36-48 hours.

You can tune in and watch Hall watching movies during his ultra movie marathon on Facebook Live.

Hall, who originally had plans to do this year’s marathon sitting in an actual movie theater before the coronavirus pandemic made that impossible, says there is something about all of us being at home, watching our screens more, and how can we turn that into something that helps people who need our help.

“We are all home watching anyway, there’s no reason why we can’t all do something like this,” says Hall, who adds that it doesn’t have to be “watch until you drop.”

Hall chose the movie theme of Rebel, Rebel for his marathon — movies like “The Misfits,” “Rebel Without A Cause” and “Mad Max: Fury Road” which he knows will help “wake him up because it’s really loud.” Hall selects a mix of movies he’s always wanted to see as well as those he wants to see again.

Parker Bowles is doing all sequels, and admits his plan could go horribly wrong.

“The Godfather” sequel, that’s good, and “The Good, The Bad and The Ugly,” yes, but when you get to “Teen Wolf II,” when you get to “Gremlins, The New Batch” and “Bill and Ted’s Bogus Journey,” then it’s a pretty rocky road,” he laughs. “Tom is the high master of educated cinematic respect. I’m just a dumb producer watching “How to Train Your Dragon 2″ at 4 in morning.”

The competition to watch the longest and raise the most money has brought out some friendly “aggression” between them.

When Parker Bowles starts mentioning all his celebrity friends making big donations – including Renée Zellweger and Emma Thompson – Hall, who has more support in the $5-$25 range, said he was worried about Parker Bowles’ carpet with all the names he was dropping.

“If I get a $5 donation, I’m happy. If I get $500, I’m over the moon,” says Hall, adding that every dollar is significant because the cumulative power of money is really strong. “I know there is a lot of economic uncertainty, but if you figure that you haven’t gone to the theater, paid for a babysitter, taken an Uber or paid tolls on bridges and tunnels, you could turn that money into a donation.”

“Red Nose Day is new in America,” says Parker Bowles, adding that it’s more well known in the United Kingdom. Both Parker Bowles and Hall liked how the organization takes monies and helps children systemically by distributing to existing organizations such as Save the Children, Covenant House and Feed America, to name just a few.

Find out more about the movie marathon, how to do one of your own, and Red Nose Day here.

Remembering Martin Luther King. Jr. – ‘I Have A Dream’