Over a thousand people marched through the streets of Montclair Saturday to show support for the Black Lives Matter movement and to protest police brutality that has resulted in the loss of countless black lives, most recently the murder of George Floyd.

The peaceful march, organized by Abraham Dickerson with Montclair Citizens for Equality and Fair Policing in conjunction with For the Peoples Foundation, started at Nishuane Park. 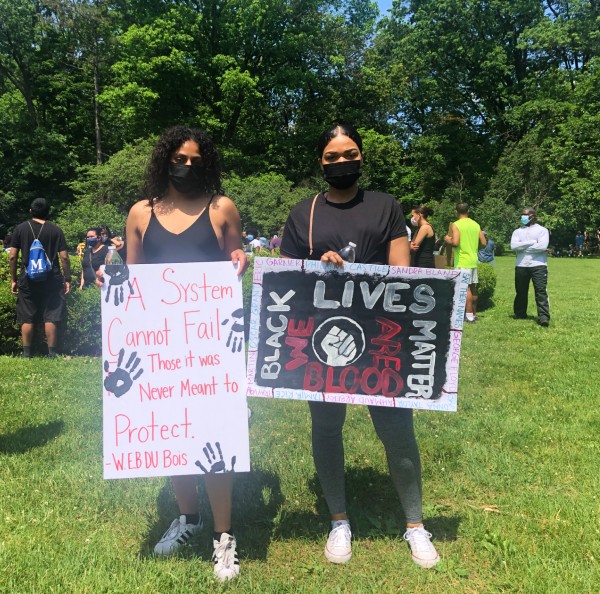 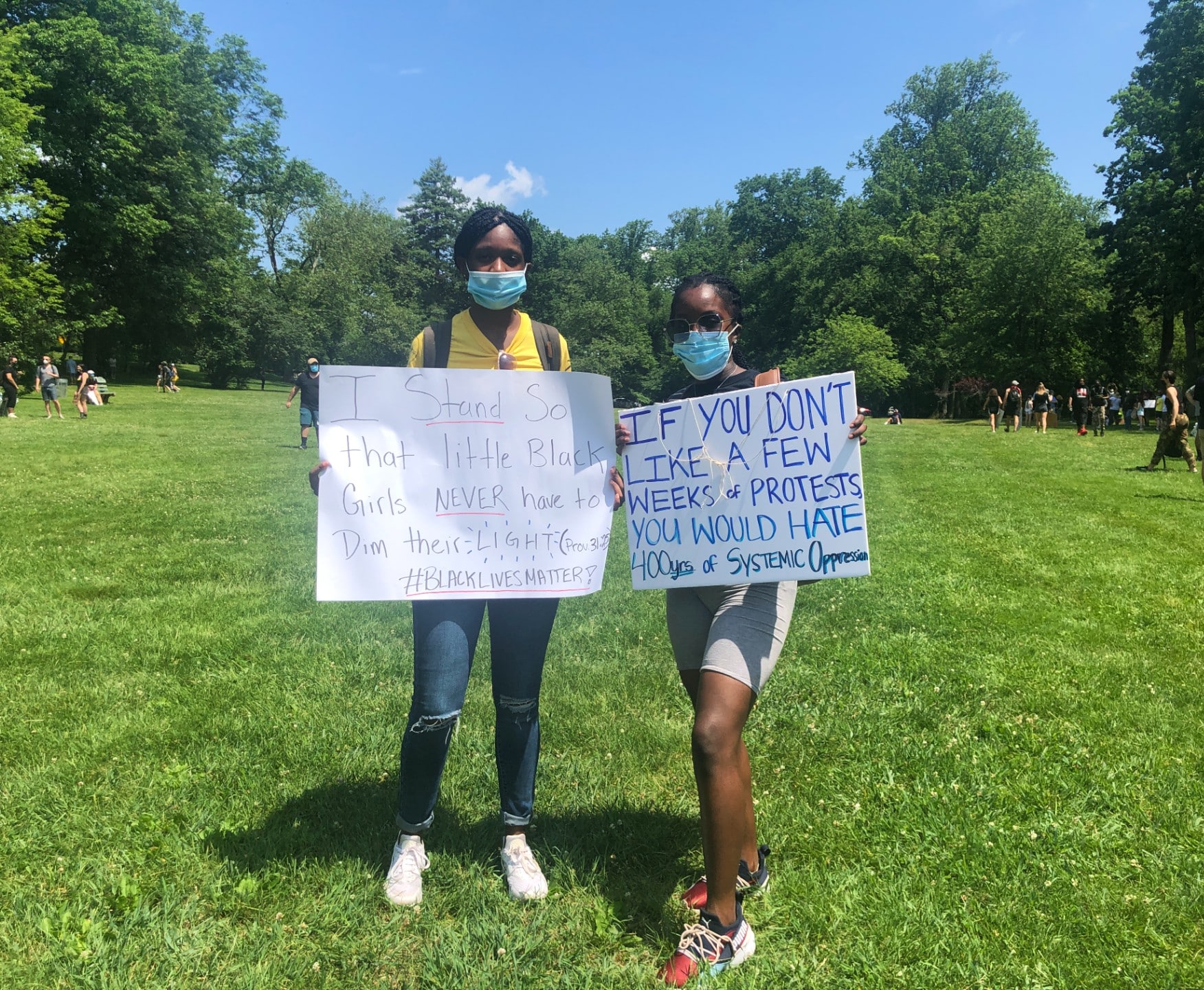 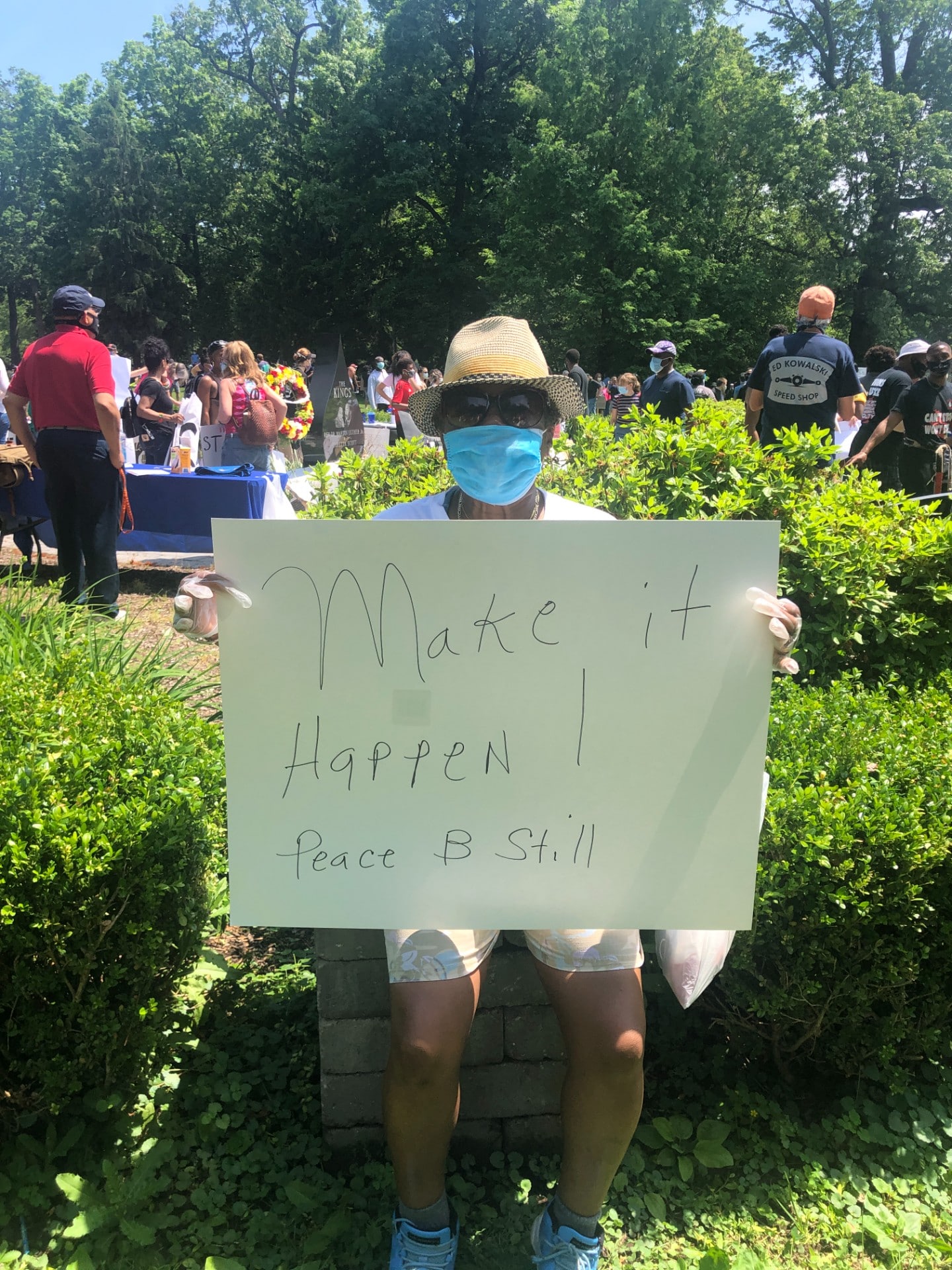 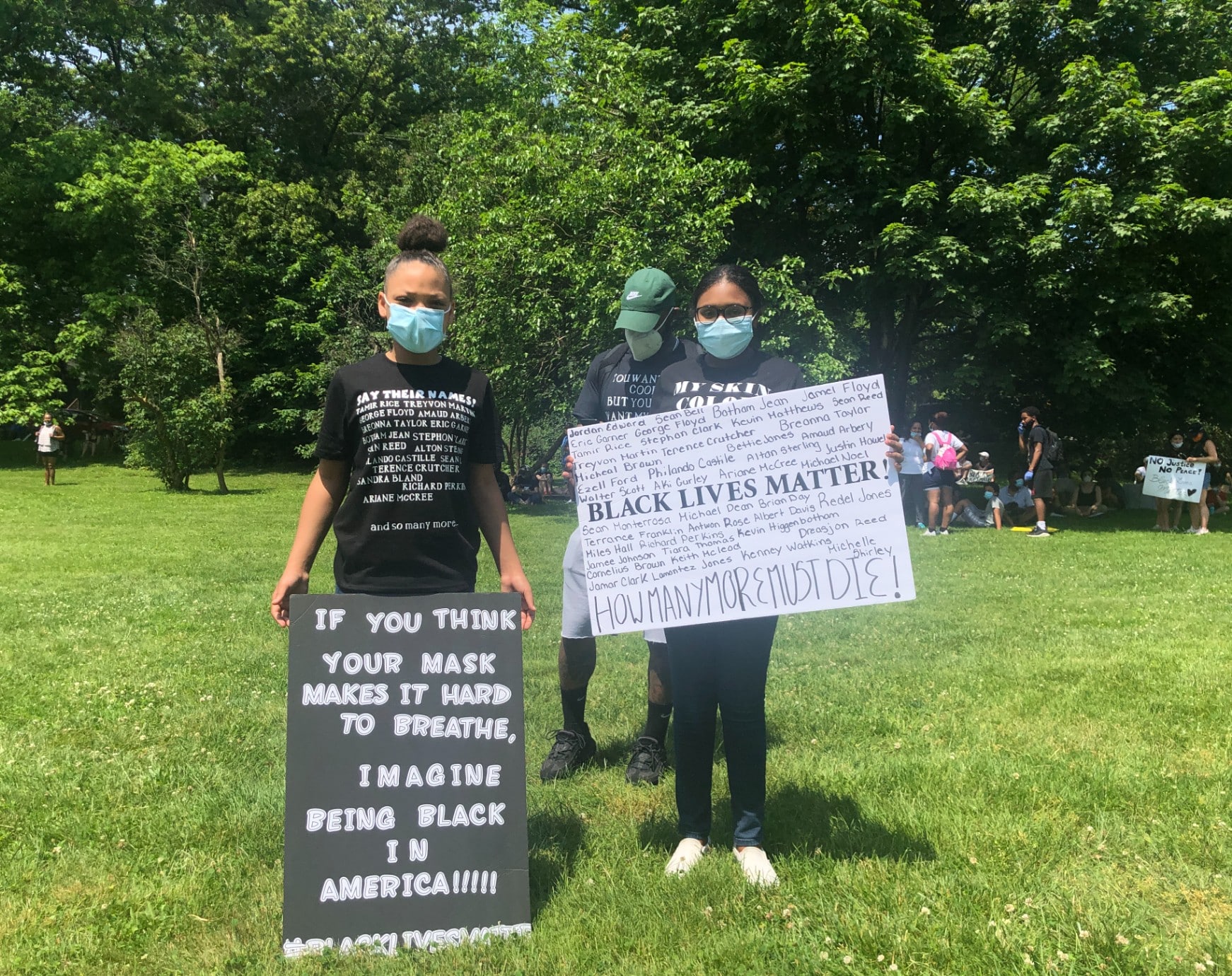 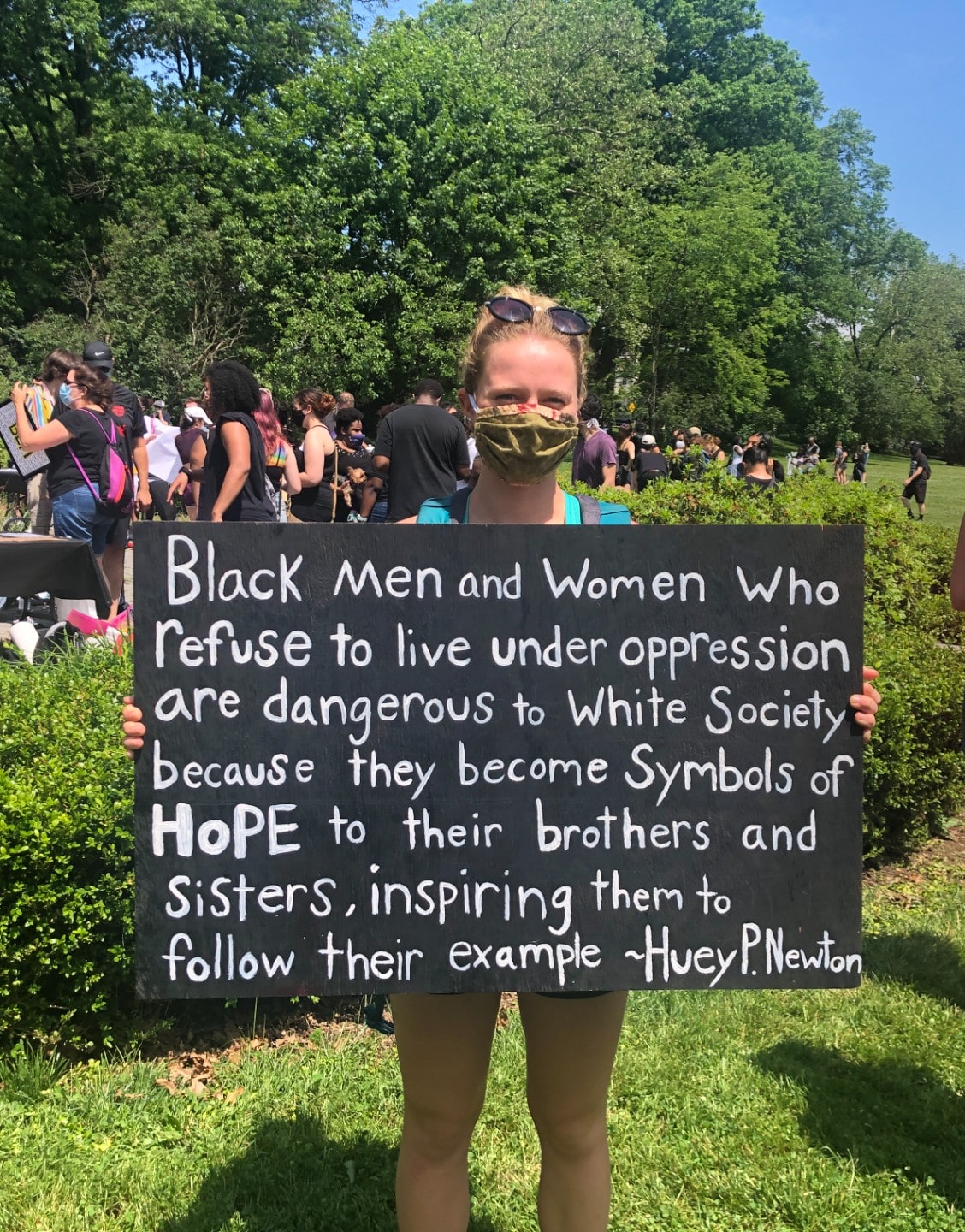 Protesters of all ages, wearing masks, gathered to watch a martial arts presentation by Shakil’s Warriors and visit tables where they could make signs or register to vote. Then the program began.

Maxi Lopes, a 2015 graduate of Montclair High School, talked about how there were two Montclairs.

“I’d be lying to you if I said we live in a perfect community. Our town is known for being diverse, but what you don’t know is that we all don’t live in the same Montclair,” Lopes said.

“As a child I struggled with playdates because every time I wanted to have a playdate with one my friends, their parents never wanted it to be hosted at my house, because I lived on New Street. It created an insecurity within me that I stopped inviting kids over to my house and I only went to theirs. At that young age, it begins to create a narrative, because now you are constantly playing with their toys, at their house, going by their rules and their power dynamics. Suddenly you are inferior,” said Lopes, who also recalled being 12 years old and the only black girl at a slumber party where she was intentionally teased and shunned.

“We need to teach our children that the pigment of their skin makes them no better than the next person. I’ve been angry and tired of the constant battle of being profiled and mistreated for being black. We aren’t even safe in a place as sacred as our homes,” said Lopes, referencing the killing of Breonna Taylor. “Things are not OK. Stop asking us how we are doing, because you already know the answer to that question. Ask us what you can do to help and stand 10 toes down with us through the battle.”

Slopes was followed by Adarian Sneed, MHS ‘2017, who performed the Black National Anthem, Lift Every Voice, encouraging everyone to sing or hum with her.

Then the crowd was directed to march. Armed with signs, bullhorns and chants “Not Justice, No Peace” and other rallying cries, the peaceful group made its way down Harrison Avenue. Along the way, people stood outside the route, holding signs, and offering bottles of water to the protesters, and more people joined the march.

There, they were met by Lawrence Hamm from The People’s Organization for Progress, who led the crowd in shouting “No Justice, No Peace, No Racist Police” and “Power to the People” and saying the names of George Floyd and Breonna Taylor.

Hamm, who has lived in Montclair all his life, addressed the crowd in front of the Montclair Police Department.

“Today is the proudest day of my life. We are angry, there is nothing wrong with being angry. We are furious about the death of George Floyd, Breonna and Ahmaud,” Hamm said. “We are going to take our anger, take our fury, take our outrage and turn it into energy to end the scourge of police brutality in this country.”

The protesters were asked to take a knee for eight minutes and 46 seconds of silence, to remember George Floyd. Those who could not or did not want to take a knee, stood with hands up or a raised fist in solidarity.

The, the march continued down Bloomfield Avenue turning at Lackawanna Plaza to come together at Crane Park.

There, Abraham Dickerson spoke about what needs to change in the Montclair Police Department including body cameras and a civilian police review board. He also raised the need for conflict resolution.

“There have been too many times where we have had altercations with police officers. What I’m requesting is to have a one-on-one meeting with that police officer, to figure out what’s going on between you and I. Is there a way for conflict resolution between the officer and that particular citizen? That’s what community policing means. Getting to know the people who live in your town,” Dickerson said.

Dickerson introduced the first of an array of young speakers, Alexandria Kerr, an MHS alum, who rallied the crowd at Lackawanna Plaza/Crane Park.

“Before you start a riot, and throw a stone and burn something, ask yourself, ‘did I vote?'” Kerr said, adding the solution was “Vote them out!”

Thank you to all those who marched and protested today in Montclair. My family and I were honored to be a part of it and to be part of this community. Humbled to be asked to speak (Full remarks @SeanMSpiller facebook) #blacklivesmatter pic.twitter.com/F0ZxDG1zmG 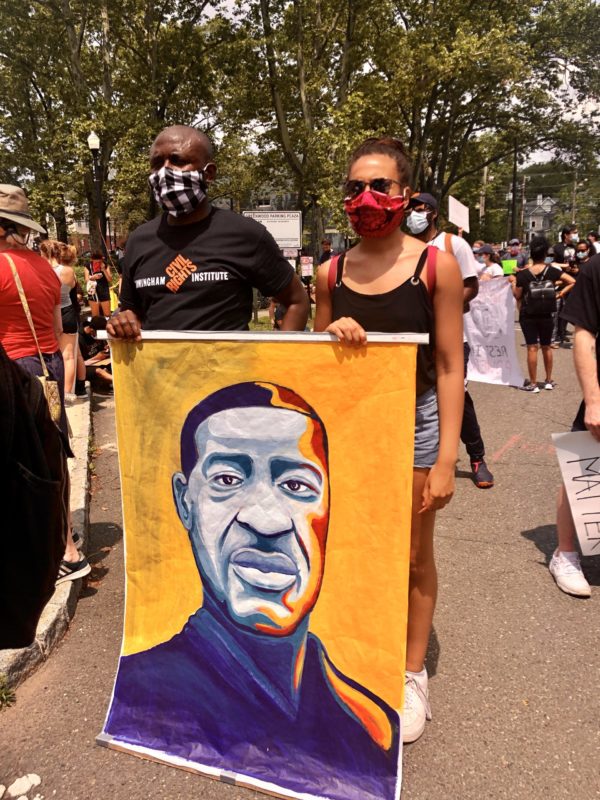 Montclair Mayor Robert Jackson, who stood on the steps of the Montclair Police Department and was joined by Councilor Dr. Renee Baskerville, sent this statement Saturday following the historic protest:

The action today was a moving tribute to the life of Mr. Floyd and a righteous protest against his heinous and senseless murder.

The demands for justice for Mr. Floyd and police reform are heartfelt and warranted. I look forward to both being realized.

That said, I couldn’t be more proud of our Montclair Police Department. The MPD’s record regarding brutality and excessive force is exemplary. More importantly, its quest for perfection in these areas is sincere.

My prayer is that the people of Montclair and its police officers will continue to build mutual respect and cooperation.