“NO JUSTICE, NO PEACE, NO RACIST POLICE.”

These were just a few of the protest chants at the Black Lives Matter Unity march on Sunday afternoon at Montclair High School. The student-organized event surpassed a historic march the previous day, attracted an unofficial 6,000 people of different races and ages, with many families in attendance.

But it was the statements made by students and their experience with racism that made a national movement specific to Montclair. 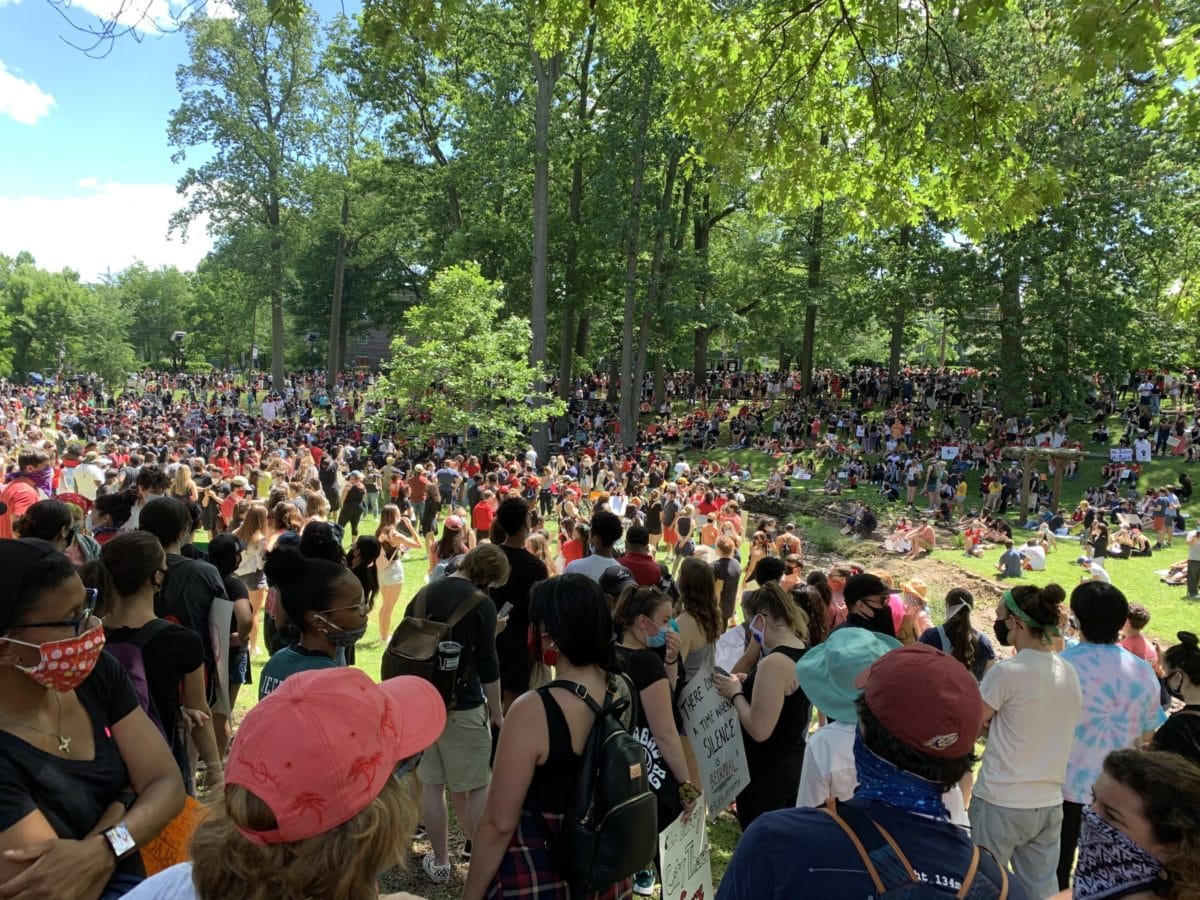 “Systematic racism plagues every system in the United States and it needs to be noted that Montclair is not an exception,” Shayla George, a senior at MHS who also organized the walk.

Examples of that racism were shared in a series of short speeches from students that were personal, powerful and heartbreaking.

One student shared how her math teacher once told her not to talk like a slave. Another shared how a teacher came over to where the four black students in the class were sitting and said that it smelled like fried chicken.

Students spoke of a staff member who continuously gives detentions to students of color, but chooses to ignore when a white student arrived at class significantly later, or other staff who make no effort to know their names.

“When we were reading ‘Beloved’ in class, my teacher asked if anyone would be uncomfortable if she read the ‘N’ word. As the only black person I raised my hand, but they ignored me and did it anyway.”

“My three black girlfriends and I were leaving from the basketball game against MKA (Montclair Kimberley Academy) in February, when a group of white MKA boys drove past us and yelled at us ‘to go get our food stamps.'”

“They would really say racist things to me. Like they had to unlock me. My teammates would just be silent on the bus back while I kept my head down about it.”

Another spoke of how hard it is to fit in with white students, adding that she let her “white friends call me ghetto whenever I wouldn’t wear Brandy Melville. Those same girls wear everything I tried to wear before it became trendy. Ghetto is just black culture that is yet to be stolen.”

Jayda Gardner described the culture at Montclair High School as “so white that it makes black people hate black people. It’s hard to describe, but it’s so real. Black people can be just as anti-black as white people because we can’t fit in anywhere.”

Another student shared how she had been told on multiple occasions “that I was pretty for a black girl. Putting down a whole race to flatter me is not a compliment. Why can’t I just be praying for a girl?”

Her speech, as did many, drew cheers of affirmation from the crowd.

The students also had printed copies of these statements available at the event, for participants to see the pressing need to change the racial culture in Montclair Schools.

The organizers also outlined a list of demands, including desegregation of classrooms, more black teachers and leadership in the district, and dismantling the Eurocentric curriculum.

Elizabeth Blaine, a freshman at MHS, said “I think having this protest will put pressure on our school board to help make the demands come true.” 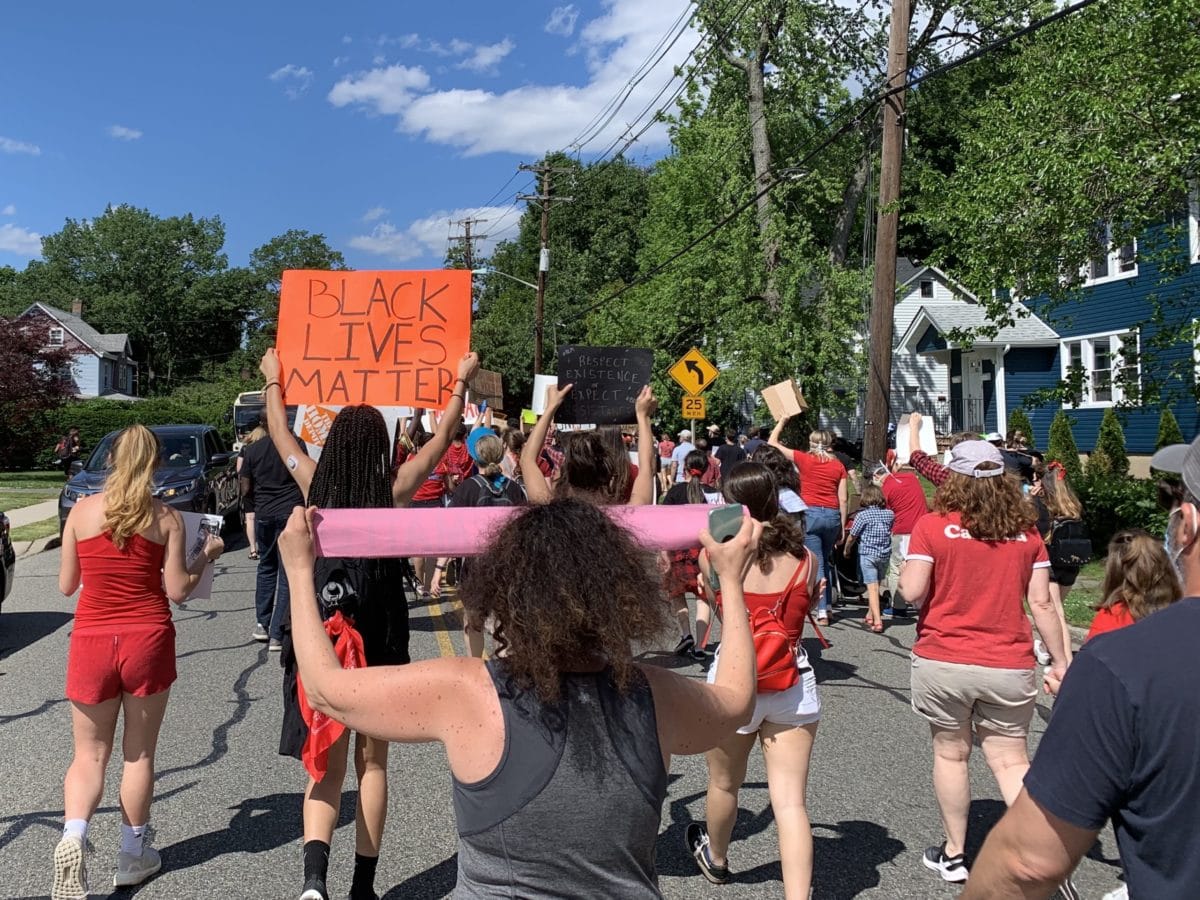 The march also featured a moving dance performance by Michael Ellis, an MHS junior. Ellis, who is black person and identifies as a member of the LGBTQ+ community, said his “identity tends to silence [his] voice from being heard in society simply because of the stigmas that are placed on people like [him].” But the unity walk helped Ellis realize he has “the power to speak out” and that he “cannot let peoples’ hate and bias scare [him] into not fighting for what’s right.”

The final part of the student-led program was an eight minute and 46 second moment of silence, the amount of time a police officer had his knee on George Floyd’s neck — suffocating and killing him. Throughout this time, Whitlock read off a list of the names of black men and women who lost their lives lost due to police brutality.

Joseph Turner, a social studies teacher at Buzz Aldrin middle school, praised the students for driving and leading the event. “That’s what makes this protest extremely unique and powerful,” he said. 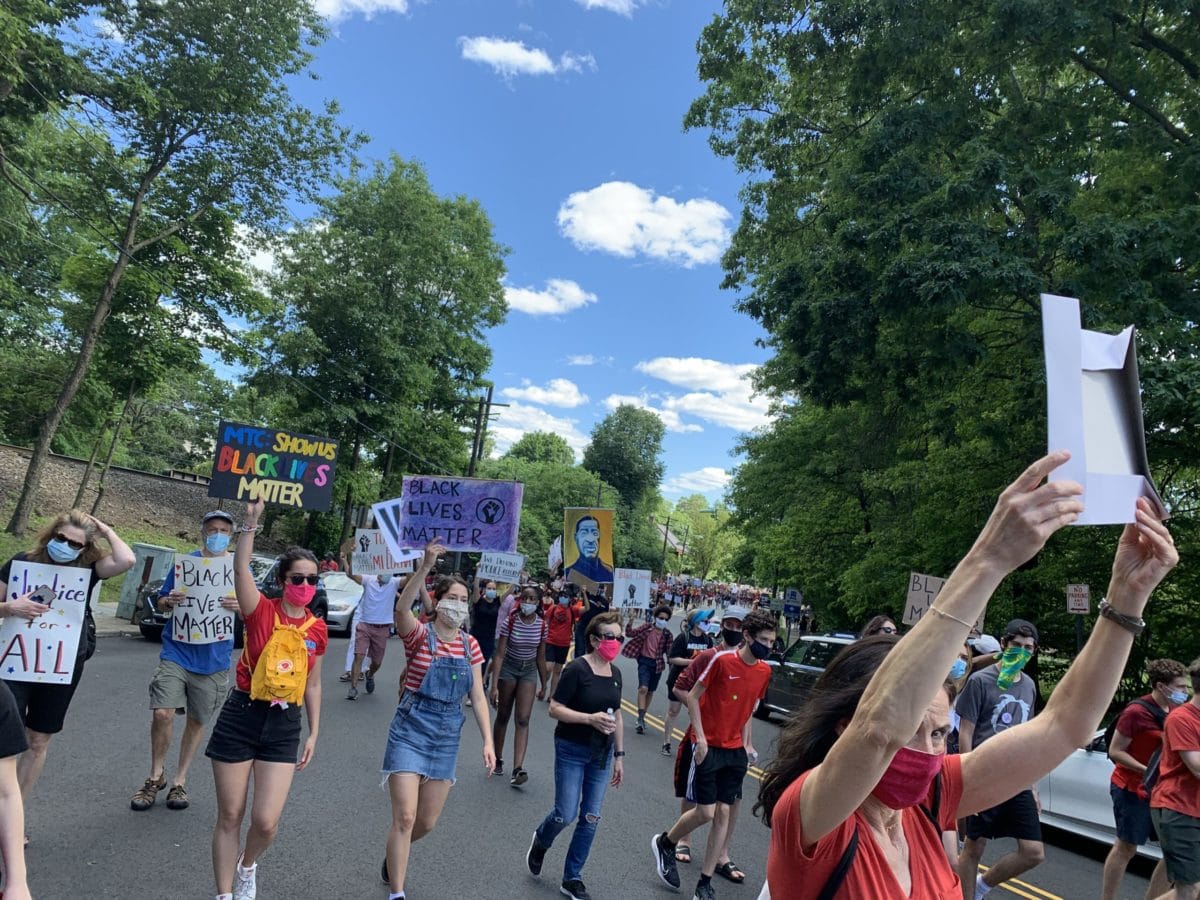 The actual march began at 3:30 p.m., and protesters split into two groups. One group marched downtown, near Nishuane Park, while the other marched uptown, near Anderson Park. The organizers did not obtain a permit, as the meeting place, Rand Park, is a public park. The organizers did however, get in touch with the police ahead of time and streets ended up being closed to accommodate the large number at the peaceful protest.

Cole Hepburn, a 21-year-old student at West Chester University in Pennsylvania and Montclair native, said “I feel like I had to be a part of it because this is my community. I feel like we all have to march together. Just want to be a part of something great.” 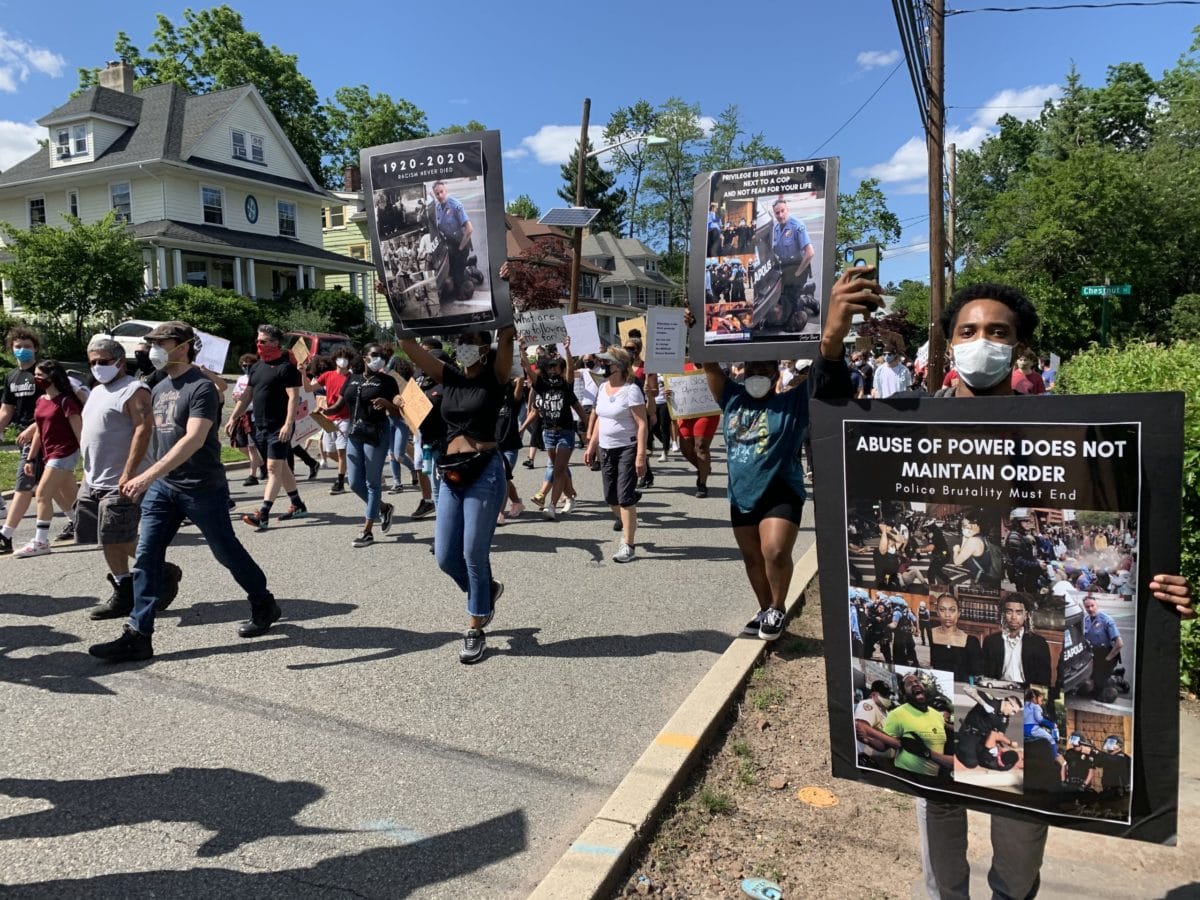 The organizers livestreamed the event on their Black Lives Matter Montclair Instagram account for anyone who could not attend or was concerned about being part of a large group during the coronavirus pandemic.

Masiel Rodriguez-Vars, executive director of Montclair Fund for Educational Excellence (MFEE), said “we’re here because it’s critical. This is the safest way to do it and I really applaud the students for being so thoughtful and organized. It’s great to see everybody in their masks, and it’s really hard to social distance when you’re trying to do a protest. You can’t protest from Zoom.”

For some people, the Unity Walk was the first march they had ever attended; others shared they had been longtime activists. But most people agreed that Sunday’s march felt weightier.

Zach Sanders, a senior at MHS, said this was his first protest because “I’m tired of all these black men and black ladies losing their lives for no reason.”

LeeAnne Korbel, a music teacher, hopes the march will lead to change.

“I think it’s hitting home and they are going to find ways to take action.”

Georgia Chen is a junior at Montclair High School.