MONTCLAIR, NJ — The COVID-19 pandemic has transformed nearly every aspect of public life in the country, including one of the most central — how people worship. Zoom meetings, Facebook Live and Google Meets have replaced the longstanding traditions of gathering in a community space to meet and pray together.

As much of the country had to transition to online meetings and interactions in early March, the questions for places of worship were clear. How do we stay connected when a physical connection is not an option? How do we safely maintain faith when we cannot be together in person? 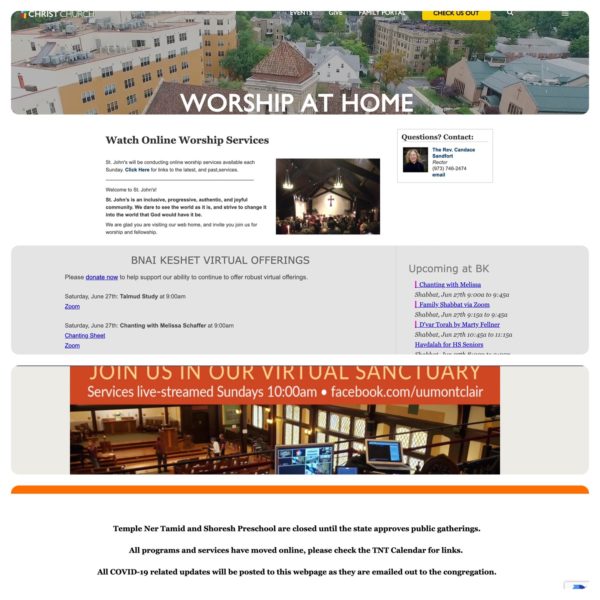 For many places of worship in and around Montclair, the answer was to immediately voyage into a complex, sometimes unfamiliar, virtual world. This move meant veering away from practices that were hundreds, even thousands of years old, and acclimating to social distancing, a concept unfamiliar to almost everyone.

“We were chased out of the church by this virus within 48 hours,” recalled the Rev. Melissa Hall of The Episcopal Church of St. James. “We were really running out the door.”

“We realized the gravity of the situation just after the Jewish holiday of Purim, a few days after hundreds of people had been in our building,” said Cantor Meredith Greenberg of Temple Ner Tamid. “It pushed us into a really deep, serious choice-making moment. We had to really think deeply about how to be safe, and in three or four days, we moved everything we do to virtual. It was all hands on deck.”

For places of worship, long used to open-door policies, shifting to a virtual-only environment raised an immediate challenge: how to maintain a connection to their congregants, many of whom have felt isolated by lockdown and quarantine policies. Making sure congregants feel supported and accounted for has been and still is a top priority for many places of worship in Montclair.

“In the first month, everybody felt extremely scared, isolated, and distanced, and needed to connect to each other more than ever before,” said Cantor Greenberg. “The only other time that happened was after the Pittsburgh shootings, and before that, 9/11. People were shaken to their core, and it made them feel scared and vulnerable.”

Since the pandemic began, the routine comforts of communal worship have been replaced by strange new ones; drive-by birthday celebrations, delivering groceries to at-risk congregants and pastoral care via one-on-one phone calls. As helpful as they are, these interactions fall incomparably short to an in-person experience. 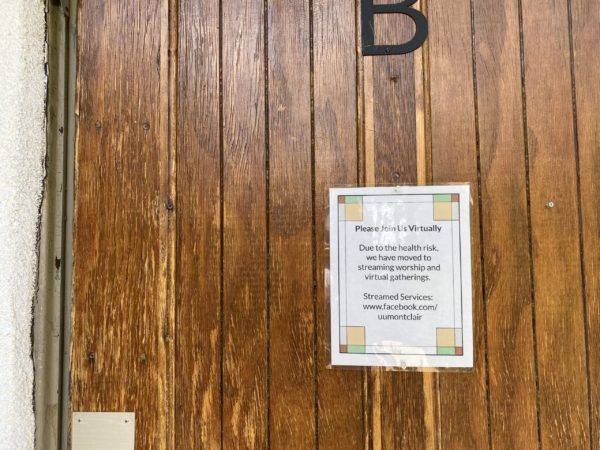 “We are all missing the warmth of physical contact, especially when we would see one another on Sunday,” remarked the Rev. Anya Sammler-Michael of Unitarian Universalist Congregation at Montclair. “In this time of incredible isolation, we’re very grateful to be able to provide the online ministry beyond our walls.”

But the online ministry has its limits.

“Part of being a good clergy person is that you are aware of how someone is doing physically, through their body language,” said Rev. Hall. “How do you hand somebody a tissue over Zoom?”

Temple Ner Tamid’s Cantor Greenberg shares some of the frustrations that come with distance.

“So much of the job is about getting the in-person affirmation like seeing people being energetic and seeing their faces. These really basic markers which I am used to relying on were all gone in a second.”

For Cantor Greenberg and her fellow celebrants, the richness of in-person services is impossible to duplicate.

“I usually play percussion during services, but now I have to lessen everything down. Now it’s just me in my living room with my guitar, and there’s no clapping or singing along. There’s an internal pressure to re-open because we know that it’s better when we are together.”

In a time of great unrest for the country, as protests against police brutality and uncertainty over the coronavirus are at the forefront of everyone’s minds, people who ordinarily rely on their religious space for healing have instead felt a profound sense of displacement. Those needing to mourn loved ones lost to the virus have not been able to grieve in traditional ways.

“When George Floyd was murdered, pain rippled through our congregation, as it did through all communities,” said the Rev. Sammler-Michael. “The sense of dislocation we felt was more pronounced than at any other time. Because in times like that, in the past, we have come together immediately. We have requested to hold off on memorial services for folks who have died in my community, which is painful for many families.”

One of the main concerns regarding online worship has been sustaining participation. Congregants who lack a firm grasp on modern technology and those with poor internet connectivity found trouble adjusting to virtual worship. And besides technology concerns, many prefer in-person services as opposed to online, so places of worship have had to adapt to different levels of congregant engagement than they were accustomed to.

Christ Church, a large non-denominational place of worship, has found success through increasing its media output and has seen its participation numbers online rise significantly. The Church boasts two campuses, one in Montclair and one in Morris County, but has recently gained a thriving new third campus, the online campus. Videos and live streams from the Church have reached countries such as Kenya, Venezuela and Costa Rica. Christ Church has found that when more content is available, the level of engagement is higher.

“We have to be very creative and constantly make changes,” said Velez of the switch to online services, as the Church usually seats nearly one thousand people in their property on Church Street. “But, we have thousands of more people tuning in online than we otherwise had in-person. We had no idea that this would happen, but our online numbers have increased by five-thousand percent.”

Bnai Keshet, a reconstructionist synagogue on South Fullerton Avenue, has also seen an increase in participation, with more congregants joining services online than had been in person, according to the synagogue’s Co-President Dinah Hendon.

“It’s been super well received,” said Hendon. “In the beginning, we had as many as 90 households joining services. Some 223 members registered for an action-packed virtual retreat we had over Memorial Day weekend.”

While numbers have gone up, attention spans have not necessarily kept pace.

“Not everyone who watches stays for the entire service,” said the Rev. Sammler-Michael. “It’s not a large number that engages fully.”

Although the ongoing pandemic has strained the physical relationships between places of worship and their congregants, studies from the Pew Research Center have shown that Americans are far more likely to say that the coronavirus crisis has strengthened their faith, rather than weakened it.

In terms of re-opening, much like the rest of the world, religious leaders do not know what the future holds. Some leaders explained that they are prepared to continue with virtual worshipping into 2021.

For the moment, CDC guidelines and New Jersey regulations are discouraging indoor gatherings of more than 50 people. With religious services averaging more than that number, it will be some time before people return to crowded pews and the sound of soaring choirs. And when it is possible to return, things will look and feel different than they did pre-COVID.

“Christ Church is going to have a pre-registration for our services. You will be able to select a seat online as if you were going to the movies,” explained Velez. “If you’re willing to come, we are definitely willing to do all that we can to keep you safe. With challenge comes growth.”

Remembering Martin Luther King. Jr. – ‘I Have A Dream’