Nutley for Black Lives protesters were confronted by counter-protesters during their peaceful solidarity march on June 26. One of those counter-protesters, identified by Twitter as Valerie Pastore, is seen on video screaming and giving protesters the middle finger. Images of Pastore at the rally were sent to Hackensack Meridian Health – Mountainside Medical Center, by the Vote Dem For The Planet Twitter account, with this message:

Valerie Pastore of Nutley, NJ was seen at the anti-BLM protest in Nutley yesterday in a MAGA hat, screaming at protestors and at one point making the Nazi salute. She works as the Director of Physician Recruitment at Hackensack Meridian Health – Mountainside Medical Center.

They are “reviewing” it. pic.twitter.com/TWktcpbLxX 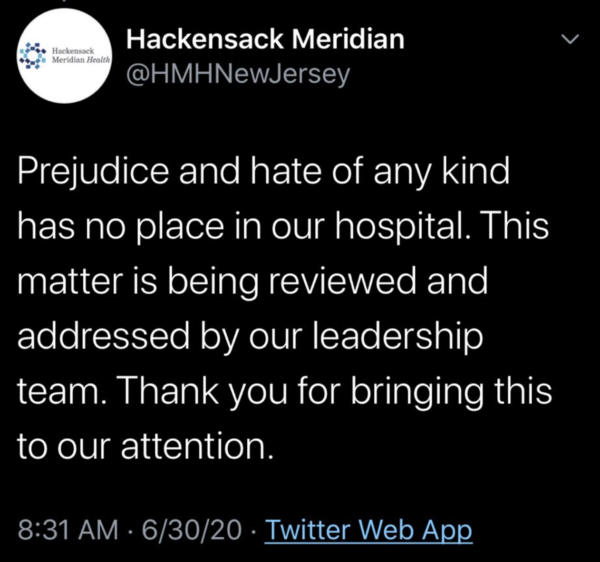 That message was followed by this one:

“Thank you for bringing this to our attention. This individual is no longer an employee at our organization.”

The counter-protesters had gathered near the Christopher Columbus Statue in Nutley.

“We want to make it clear that the protest is not centered around the town’s statue, however as Nutley For Black Lives, we do support its legal removal,” Nutley for Black Lives Matter organizers stated.

Two Christopher Columbus statues have been removed in Newark. There is a movement to both rename the Nutley Belleville Columbus Day Parade and remove The Nutley Columbus Statue.