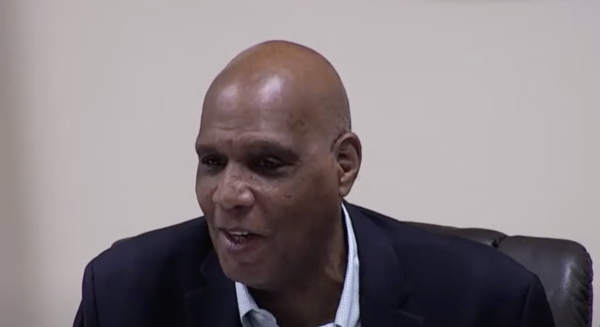 MONTCLAIR, NJ – Montclair Mayor Robert Jackson officially ended his eight years as mayor of Montclair Wednesday when a newly elected council was sworn into office. Jackson, presiding at his last council meeting on June 23, shared some parting words about his time in office and was critical of Montclair’s print media for neglecting to cover some of the accomplishments of the outgoing council.

“The accomplishments of this group, I think they speak for themselves. It is a team. Sometimes, you know, one of us may get more attention on a given issue, but it has been a team effort for all of us, and we’ve gotten things done by, by working together. And I think focusing on the things that local government is supposed to focus on,” said Jackson.

Jackson then said he hoped the new council that comes in gets a fair shake.

“I think when you think about what this group has been able to accomplish over eight years, and some of this is old news, but it needs to be repeated because it doesn’t get the recognition, particularly in the print media, I should say. When you look at reducing our debt from $223 million down to $163 million, from a double AA minus rating to a triple AAA rating.

“When you think about the fact that when we took office, the fund balance for the town was 3.3 million. That’s how much money we had in the bank. At the end of 2019, we had $17 million. You also may or may not know that when we took office, there was $54,000 in our storm recovery fund, that we use for emergencies. We now have over a million dollars in that fund. And because of a change in the state policy, we’re actually able to use that money for some of the COVID-19 efforts.”

Jackson spoke of the five major pieces of apparatus acquired for the Montclair Fire Department.

“I think the average age was like 15 years when we took office; one piece was over 20 years old. I remember firefighters saying they were literally afraid to go on fire calls because they weren’t sure that they were gonna make it from the station to the fire. Today, four out of five of those apparatus are essentially brand new and the fifth one is going to be brand new when I hope this council will get the fifth one,” said Jackson.

Jackson spoke of other improvements to the township over the last eight years.

“We’ve renovated Edgemont, Porter and Yantecaw Parks, with new pathways, benches, etc.; rebuilt Canterbury Park tennis courts; Rand and Mountainside ball fields; improvements to Watchung Plaza parking and Crane Park; replaced a lot of the packers and snowplows and dump trucks and pickup trucks for our DPW; replaced 2000 shade trees; and made significant improvements in our township’s technology infrastructure. And in 2021, we’re going to have incrementally 800 more parking spaces than we had when we started,” Jackson said.

“And through the leadership of Mayor Elect Spiller, we put together a comprehensive business support program for our business community. I don’t know of a town that has a more, more comprehensive program than we have, which includes $150,000 of cash, that’s going to be able to help our local businesses to get through this and buy the necessary equipment and PPE that they need to get through,” said Jackson.

Jackson then spoke of a change he sees in Montclair.

“You know, I’m a long timer. And one of the things that I think we have lost in this community is a certain amount of just social graces, because in my opinion, even if the program were late, a thank you probably was in order, for even being late. I think that in many cases, we’ve heard the criticism, but when it was done, we didn’t hear any of the thank you’s. There was a time in my experience in town when even something good late would have been recognized and someone would have said, thank you, for at least doing that. But again, I guess times change.”

Jackson said he believes the new council is going to do great things.

“I hope that the print media gives an opportunity, because quite frankly, you read some of this stuff and it’s depressing. Like, ‘why do live here?’ There are people who are killing themselves to live here. I get complaints from first time buyers saying ‘I can’t buy a house in town because there are about 10 offers over the asking price, all cash, we can’t afford to compete.’

“So people want to live here. They know what a good thing this place is,” said Jackson, who also referenced this article from PureWOW that highlighted Montclair as a travel destination.

“This has been a great experience and I think we made a great difference,” said Jackson, adding how pleased he was with the new group coming in.

“I just hope that the work they’re going to do is going to get its proper due. It’s really shameful that what this group has been able to do has gone, just basically ignored, for reasons I won’t even dignify. Good luck to the new group group and to staff and everybody else. Thank you. And God bless everybody,” Jackson said in closing.