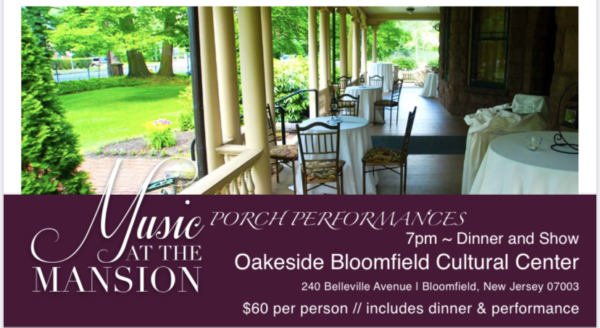 NiCori Studios & Productions in association with Oakeside Bloomfield Cultural Center and Frungillo Catering will be producing: MUSIC AT THE MANSION: “PORCH PERFORMANCES” – an evening of dinner and entertainment hosted by Music at the Mansion’s Corinna Sowers Adler, beginning on July 25th, that will be safe, socially distant and fun! Meal to include an elegant, boxed dinner by Frungillo Catering including salad, entree, side dish, dessert and coffee.

Each night will include a performance by one of New York City/New Jersey’s top Cabaret/ Broadway performers on the large wrap-around porch at Oakeside. Performers to include Corinna Sowers Adler on July 25, Lisa Viggiano on August 1, Stearns Matthews on August 8, Liz McCartney on August 15 and Danny Bacher on August 29. All begin with dinner at 7pm with performance to follow. Tickets are $60 per person and include full meal and performance. BYOB. 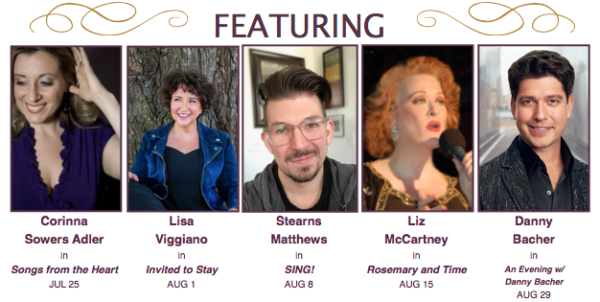 The series begins on Saturday, July 25 at 7pm with Oakeside’s Artist in Residence, Corinna Sowers Adler who is also the Founding Artist Director of NiCori Studios & Productions, an educational incubator for young performing artists. Singer/Actress Corinna Sowers Adler has been called one of the most gorgeous voices in the New York Cabaret Scene. She has appeared in her solo shows at venues all over the tri-state area and around the country including the famed Appel Room at Jazz at Lincoln Center. She is a multi award nominee, and has been nominated six times for the Excellence in Education TONY Award. Her show is entitled “Songs From The Heart” will feature James Horan on piano and will include music from the Great American Songbook and the standards that we all love!

Singer and recording artist Lisa Viggiano is a BroadwayWorld and Bistro Award winning artist who will release her latest recording, Invited To Stay, at NiCori’s Porch Performances on Saturday, August 1st at 7pm. The concert will include songs from her new CD, her MAC award winning show, plus, a sneak peek at songs from her upcoming show, First Raitt (the songs of Bonnie Raitt & John Raitt) and will feature Jon Webber on piano. All CDs sold at the show will benefit the NiCori Scholarship Fund.

Stearns Matthews, a multi-award winning singer and recording artist, will appear at Oakeside on Saturday, August 8 at 7pm! He’ll be joined by frequent collaborator and friend Markus Grae-Hauck on piano and will feature songs from his two award-winning CDs as well as his critically acclaimed cabaret performances in New York and beyond. Stearns has been described as “unequivocally born to entertain” (The Star Ledger) and “sporting a voice as pure as rainwater” (The Daily Record). Enjoy beautiful music with more than a healthy dose of laughter when Stearns makes his porch debut at one of his favorite venues.

Broadway Star Liz McCartney tells the story of one of the most inspirational voices of the 20th Century – Rosemary Clooney – in her show Rosemary and Time on August 15 at 7pm. With the help of James Horan on piano and special guest Lori Alexander, McCartney presents Clooney’s music at the pivotal points in her life and gives some backstage insight to Rosemary’s life throughout her career. Rosemary and Time won the Backstage Bistro award and two best supporting actress awards for the New York Musical Theater Festival.

On Saturday, August 29 at 7pm, join Danny Bacher, an award-winning singer/saxophonist and entertainer extraordinaire, as he holds court at the Mansion with Jason Teborek on piano and brings you an unforgettable night of swingin’ jazz, American popular song, storytelling and laughs with his signature style and wit! Bacher is an award-winning entertainer who is a master of the demanding soprano sax and who combines his virtuosity on the instrument with a talent for comedy and narrative storytelling. He’s a smooth and cool individual who makes hot jazz and pop, cut from the cloth of the great Louis Prima and Mel Torme. 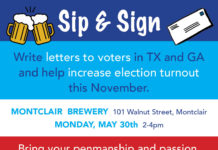